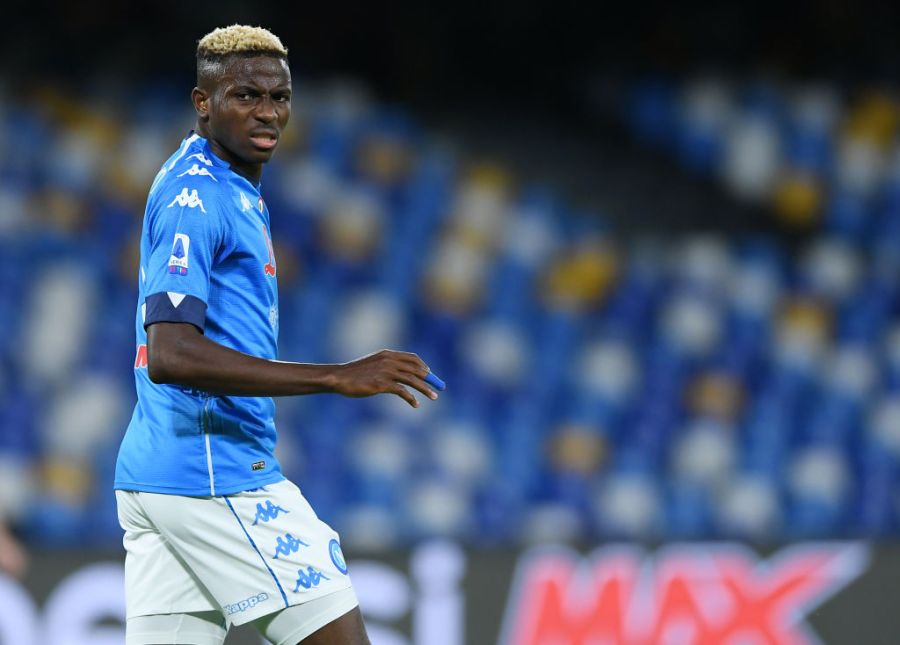 The extraordinary and unlikely story of Napoli and Nigeria striker Victor Osimhen, told by the people who knew him first

In the summer of 2020, Italian side Napoli paid a club record fee to sign striker Victor Osimhen from Lille. The outlay, which could reach as high as €81 million, would make the Nigeria international the most expensive African player of all time.

It was not always apparent that he would hit those heights. Certainly not when his footballing journey began as a scrawny young boy. At that point in his life, Osimhen had already lost
his mother, and was adjusting to the ever-constricting reality of privation in the Olusosun landfill slum in Lagos, after his father lost his job. Survival – by any means necessary – was the watchword, and while being one of seven children meant there was a multiplicity of potential income streams, hawking in the streets was far from ideal for a young boy.

In football, he found his escape. According to Nurudeen Sanni, a neighbour who became something of a mentor figure, Osimhen was born to be a centre-forward.

“I saw the qualities of a striker in him from the age of four. We nicknamed him ‘Spicy’, ” says Sanni, a reference to his capacity to sizzle and sting. “He was small, but he could move with the ball really fast!”

Eventually, football took up more and more of his time. He began to play for community-based club Peric FC, which ground-shared with a local primary school. There his competitive nature really came to the fore.

“He has always hated losing,” says childhood friend Chukwuemeka Nonso. “Even when he was playing on the local field, he would complain a lot if his other team-mates were playing poorly. He would verbally confront them occasionally. Because of that attitude, he would get punished a lot by his coach, but that was Victor. He always put above 100 per cent in whatever he was doing.” 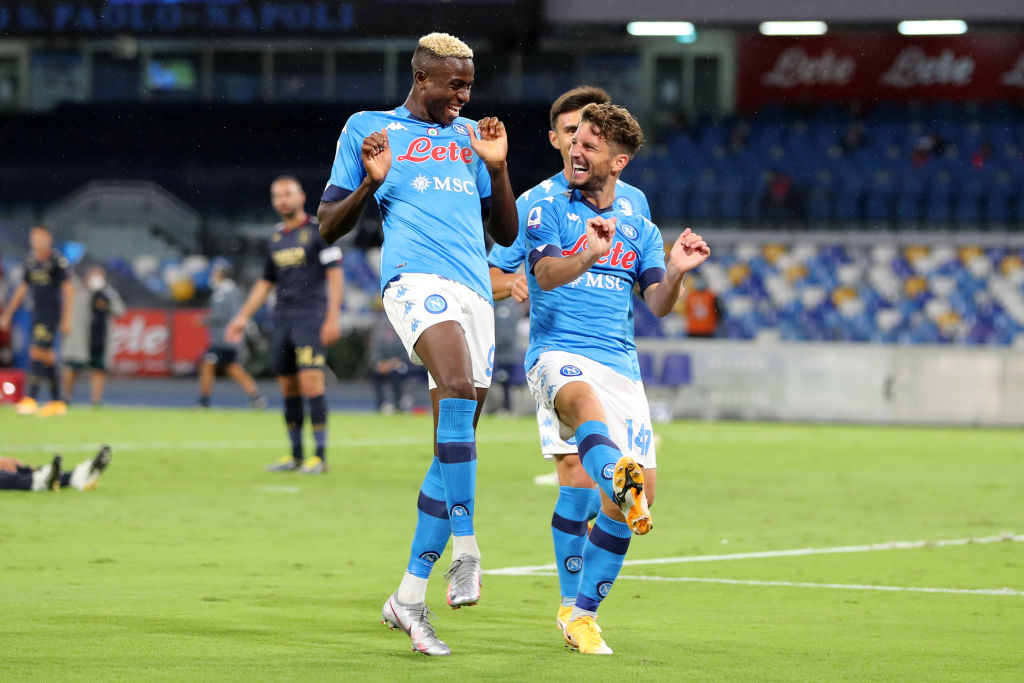 His performances would catch the eye of the aptly named Ultimate Strikers Academy. At the academy he worked with coach Chinedu Ogbenna.

“I saw him as a chap who was determined to get to whatever it is he wanted to get to,” Ogbenna recalls. “He was always keen to seize opportunities too: once he was in a position of goalscoring, he rarely missed the target.

“Whenever he remembers his upbringing, he wants to work harder. He wasn’t necessarily the best player in the team, but because of his drive and determination, he became one of our most important players.”

That determination came with a single-mindedness as well: Osimhen refused to take his A Levels, preferring to forge a path in professional football at any cost, but lied to his family that he had. Only when the results came out, and he was unable to present his, did the ruse become apparent, to the disappointment of the entire family.

The scrawny teenager had burnt his bridges; football simply had to work.

Fortune favours the brave, and so when Nigeria began to put together a squad for the 2015 Under-17 World Cup in Chile, Osimhen attended the open screenings in the nation’s capital Abuja. In order to participate, the youngster embarked on a nine-hour inter-state road trip, for the first time in his life, cooped up in a small saloon car as part of a party of six people.

Upon arrival, he would only get a small window to make a first impression. Erstwhile coach of the U17 national team Emmanuel Amuneke is a stern character, and had a large number of prospective candidates to screen, so players were sorted into teams for 30-minute appraisal matches.

It was a shot in the dark that offered few guarantees. In fact, when Osimhen called to inform Sanni that he was attending the screening exercise, his mentor was highly sceptical.

“Physically, he was very small, you know? I did not believe Nigeria would select someone like him for the Under-17s. He called to tell me he was in Abuja and I told him, ‘Don’t bother, just come back home!’

“But he told me not to worry, that he would try to make the team.”

Former Sporting and Barcelona winger Amuneke, himself something of a prodigy during his playing days, recalls the first encounter with the youngster who would go on to lead his country to success.

“I remember the first time I met Victor Osimhen,” Amuneke tells World Soccer. “Everybody was given the opportunity to be able to show their quality, but the crowd was so much. We had to organise the team in such a way that it would be easier for us to select players after 15 to 30 minutes’ play from each group.

“So, to be very honest with you, when his team was playing, I was on the other side of the pitch, trying to select a new team that would come up immediately after. When his team was done playing, I was not all that convinced. But when my backroom staff came to me, they pointed him out to me. I told them I didn’t see much about him, but that I would have a second look. That was how, in the second game, he got another opportunity and he played quite well.”

Looking back now, it was an inspired decision.

“You could see the determination in him right away. Of course at that particular time you’re not looking at the quality of the players in terms of what they’re going to present. You’re just looking for intelligence, for decision-making with and without the ball. I think these are the key things that I was mostly emphasising and looking for, and Victor had them. Most importantly, he was coachable, and he was hungry.” 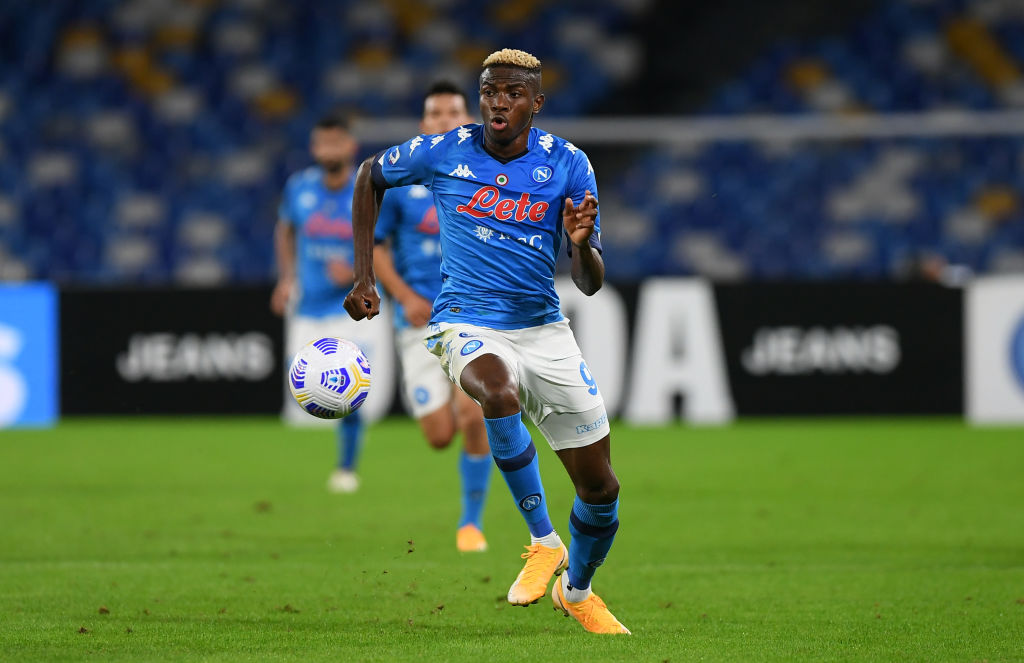 Amuneke had identified a diamond in the rough, and immediately set about polishing the young striker. After scraping qualification for the World Cup by finishing fourth in CAF qualifying, “we knew we had to work on our players in terms of our ability to take chances.

“We knew we had good players, but there were other factors that we had to bring on board, from the technical point of view to the tactical aspect of the game, even from the psychological aspect of the game. These players had mostly been picked from academies, and had not been involved in any kind of league structure.

“We looked at Victor as a striker and how we could improve his positioning, his running, his realisation that there are times you only need to touch the ball once, his decision-making in pressing situations. We had to work on all that, and thankfully he was able to adapt and demonstrate at the World Cup the quality in him.”

Osimhen positively exploded in Chile, scoring ten goals in seven matches to claim the tournament Golden Boot and Silver Ball. The quality and variety of his finishing proved a real highlight.

“As you watched him at that World Cup, you quickly discovered something about him,” Amuneke explained. “As a striker, it is not common to see a tall player like him, and at that age, with very good coordination in terms of his running and contact with the ball. Some tall players are good with their head, but Victor had the full complement of qualities you’d want in a striker.”

Despite taking the scenic route through Wolfsburg and Sporting Charleroi, and suffering some misfortune already in his professional career, Osimhen’s sheer range has seen him rise to the highest levels of European football regardless.

When, in his sole season with Lille, he scored on his Champions League debut against Chelsea, it marked a special moment for him: he had supported the London club growing up, peeping through holes in the tarp at the local viewing centre in Olusosun to catch a glimpse of Didier Drogba in blue.

Now, he is the one they watch back in his old neighbourhood.

Amuneke has few doubts Osimhen can reach even higher heights, provided he keeps the focus that has taken him this far already.

“Losing his mother at an early age prepared him for what life is like, it toughened him up, it gave him focus. I know he is a player who knows what he wants, and is very mature for his
age. He is not afraid of challenges.

“People will always have doubts, but Victor’s belief in himself helped when he moved to Wolfsburg. Things didn’t work out the way people were expecting, and probably a lot of people might have considered him one of those players at youth level who doesn’t fulfil their potential. But he remained calm, and now he’s with one of the best teams in Europe.

“If he works hard, remains humble and keeps the right associates, there is no limit to the level he can reach.”