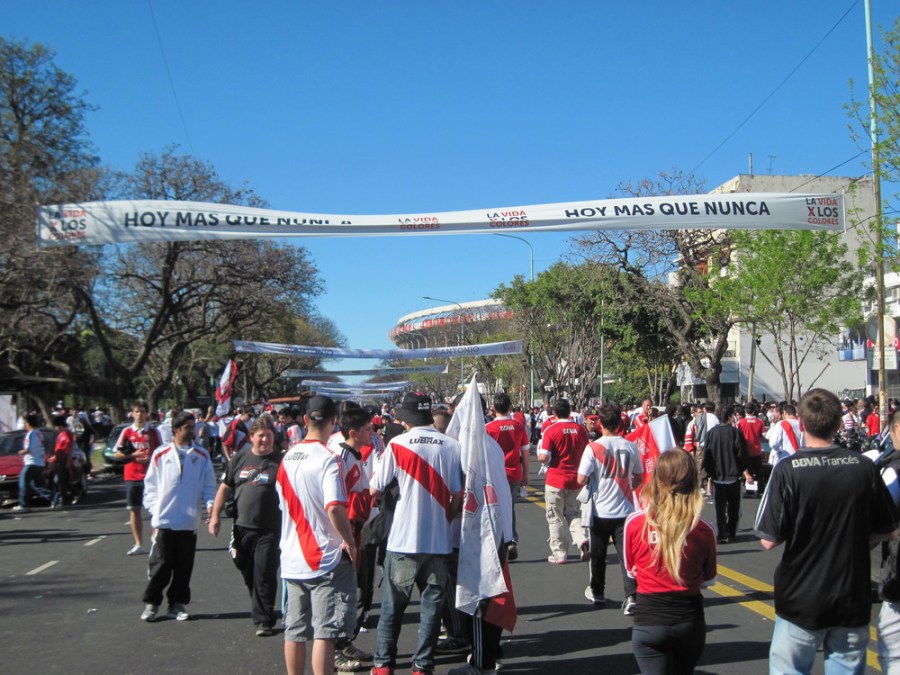 Summer is a hellish time to be in Buenos Aires. First, because the temperatures are enough to wilt even the strongest constitution – I type this whilst sitting in the living room in my pants, with the air conditioning on, and thanks to the 40 degrees Celsius outside, I’m still sweating. But for the football fan, there’s a more prosaic reason: from mid-December until early February, the Argentine league shuts down, and with clubs relocating to coastal resorts or holiday towns far from the capital to undergo ‘pre-season’ (I use inverted commas because technically, we’re actually halfway through the season), there’s no competitive football to enjoy.

Still, this is Argentina. And so it is that, amongst the phalanx of meaningless kickabouts involving the likes of Argentinos Juniors against a Uruguayan second division side playing two halves of 35 minutes each way in front of a crowd of ten people, we also have some equally meaningless – but far more famous – fixtures. Saturday night will bring the first of three (three!) pre-season friendlies between River Plate and Boca Juniors.

These friendlies mean nothing – even the players, interviewed in the days ahead of the game, admit to TV and print journalists that, ‘the first match of the new championship is the most important.’ But people all over Argentina will be watching, because the superclásico is… well, it’s the superclásico.

Such interest is generated that companies dealing in getting tourists into matches in Argentina even have superclásico ticket and transport packages available from Buenos Aires to the coastal resort of Mar Del Plata where the game is being played [more here]. And it’s unlikely to be an entirely friendly encounter, either on the pitch or in the stands. But the real meat and veg of the super is the league rivalry.

I’m going to make myself feel very old now: I started watching Argentine football over a decade ago, and took my first tentative steps in writing about it almost seven-and-a-half years ago. In April 2010, I moved to Buenos Aires. I’d been to a few River Plate games before whilst on holiday in Argentina, including one summer clásico (not superclásico!) against Racing, in the same Mar Del Plata stadium that will host this weekend’s game. After moving to BA, I was able to venture to new stadia.

I braved the touts and saw Juan Román Riquelme set up Martín Palermo as Boca beat rivals San Lorenzo in La Bombonera. I saw Independiente’s shell of a new ground, construction halted when the money from Sergio Agüero’s transfer to Atlético Madrid proved less than enough to pay for it due to spiralling inflation and, it’s hard  not to suspect, corrupt club officials (construction has since restarted thanks to Agüero’s subsequent move to Manchester City giving Independiente a FIFA development fee for the player as part of the transfer).

I saw the legendary atmosphere at Racing’s colossal ground, went to smaller grounds like those of All Boys and second division sleeping giants Ferro Carril Oeste, and in two astonishing weekends I saw Argentinos Juniors first come from 3-2 down in the 90th minute to win 4-3 at home to Independiente (oh, and met Diego Maradona’s brother Hugo on the way into the stadium), and then saw them claim the title with victory in Huracán’s giant, fading palace of stadium a week later. In July 2011, I spent three weeks covering the Copa América, held in Argentina but won by Uruguay. I’ve also been lucky enough to have attended so many Argentina friendlies and World Cup qualifiers in the last few years that I’ve now lost count (though I could have a look through all the tickets, if you really want to know).

And yet… and yet. Something was missing. Last year, my friends at LandingPadBA, a website specialising in all things Buenos Aires-related and touristy, and most of all in Argentine football tickets and tours [like these] heard that in three-and-a-half football-filled years in the city, I’d never been able to attend a superclásico. This, I was told, had to change. I’m a journalist writing about Argentine football, and they just wouldn’t stand for me not having been to the biggest game of the lot.

So it was that the last time River and Boca met, I was finally there. The afternoon had begun with meeting my brother, who was visiting Buenos Aires, at a friend’s house, from where we walked slowly – and with a stop for lunch – the fiveish miles to River Plate’s Monumental stadium, the largest in Argentina.

The superclásico is full of clichés, but I can’t avoid reporting that there were signs of the coming match all along our walk, from River fans going past hanging out of buses several kilometres from the ground, to the banners promoting River presidential candidates along Avenida Guillermo Udaondo, which forms the final few hundred metres of the walk to the ground. Listen carefully, and tilt your head in the right direction, and the sound of distant police helicopters was also audible. Although away fans are banned in Argentina at present – a response against violence in the stadium that is at one and the same time far too much, and nowhere near enough – some Boca fans and almost their whole barra brava were accompanying their team’s coach from their hotel in the south of the city (just a few hundred metres from my flat, coincidentally) to as close to the stadium as police would allow them to get.

We arrived an hour and a half or so before kick off, and Avenida Udaondo was already heaving with people. After running the gamut of police checks – my friend at LandingPad had sorted us out with only match tickets, since I already knew what I was doing when it came to getting into the stadium, but for temporary visitors, minibus transfers and guides are also available – we eventually got into the stadium, along with another chap who a security guard allowed in on my ticket because, as I overheard him telling his colleague, ‘the barra [Argentina’s answer to Italy’s ultra, and even more dangerous] have told us to let this one in.’

When we reached the stand, around an hour before the game, it was already packed, and the stadium was already resounding with chanting, at times rising to a level so loud that from outside the ground, it must have been hard to believe the game wasn’t already in full pelt. Minutes before kick off, a police helicopter flew all round the stadium, so close that from our seats in the second-to-last row of the upper tier, it almost seemed would could reach out and touch it. As Boca’s team took to the pitch, whistles rose to a deafening crescendo. When, after letting their rivals stew in hatred for a few minutes, River’s players ran out, the noise was incredible. As the sides lined up to kick off, the helicopter hovered over the centre circle, slowly lowering itself down right inside the stadium, so low that we could see the top of it, before suddenly lifting up and flying off towards the horizon.

And then the game started. The actual football almost feels like a secondary attraction where the superclásico is concerned; the pressure on both sides rarely leads to much of a spectacle, and in the last few years it’s been very rare that either team – never mind both – have had much in the way of form going into the match. During the 2013 Torneo Inicial, things were a little different; although both sides would later slide away and end the championship in disappointingly low positions, Boca were unbeaten in three and River in four coming into the game, and the consensus with friends I spoke to afterwards – River fans and neutrals, some who’d been at the game and some who’d watched on TV – was that it was a better match than the last few supers had been.

Boca won, Emanuel Gigliotti’s goal halfway through the first half proving to be the only goal of a game that was otherwise dominated by River (though Boca did hit the woodwork early in the second half). River’s many problems in attack – where they spent most of the championship creating plenty of chances and finishing almost none of them – were almost cancelled out by a very impressive defence, and I’d written before the game for The Bubble that for Boca to win, Gigliotti was going to have to make the very most of the few chances (if any) he’d be allowed, and so it proved.

The match might have been at River’s cavernous, running-track-sporting stadium, rather than Boca’s closer-to-the-pitch and more iconic Bombonera, and there might not have been any away fans in attendance (apart, perhaps, from a brave few who’d got hold of tickets and sat on their hands throughout the game), but the atmosphere was incredible even so, and I’d finally experienced River Plate versus Boca Juniors for myself. At long last, I’d truly arrived in Buenos Aires.