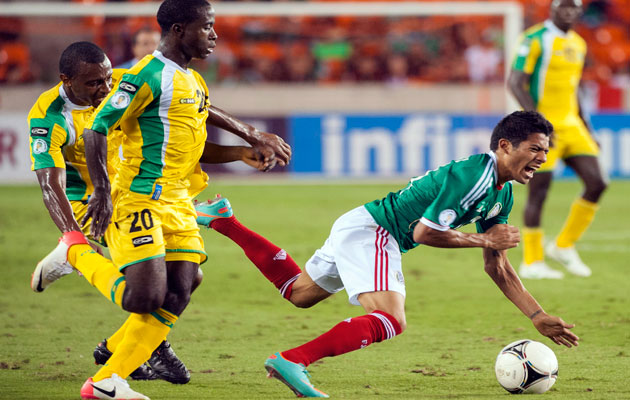 Amidst the usual release of FIFA Rankings recently lay a statistic which only a keen-eyed observer would notice: the biggest drop in places had been awarded to the small nation of Guyana, a Caribbean country geographically located in South America and neighbour to one the most famous footballing nations of all: Brazil.

Guyana was a team which only two years ago, reached their furthest ever point in World Cup qualifiers, and were giving Mexico a run for their money at the Azteca Arena after previously eliminating Caribbean powerhouse Trinidad and Tobago. Yet fast forward to 2014 and the National Team now finds themselves comprehensively losing to St Lucia and St Kitts & Nevis in recent Caribbean Cup qualifiers.

The question therefore is: how did this rapid decline occur?

Firstly, to put the development of the team into context: Guyana has a tiny population of less than 800,000, has never qualified for any major footballing tournament, and like many Caribbean Nations, the undisputed king of sport there is cricket, (the football team even uses the cricket stadium to play its games).

In essence, it should have had little hope of ever gaining entry into football’s elite competitions; yet that’s exactly what begun to happen under the mentorship of Coach Jamaal Shabazz, a Trinidadian-born tactician who helped instil a heightened sense of organisation and professionalism into the team.

Under Shabazz, Guyana leapt a massive ninety places in the FIFA World Rankings between 2005 and 2007 and narrowly missed out on qualifying for the 2007 CONCACAF Gold Cup for the first time in its history. Although Shabaaz left in 2007, he was instrumental in seeing numerous Guyanese players gain professional playing contracts abroad, and thus when he returned to manage the National Team once again in 2010 he found a much more developed and travelled team.

Improvements to the squad were also aided by Faizal Khan, a UK-born FIFA agent of Guyanese heritage who managed to convince numerous British-born players of Guyanese descent to choose to play for the team, mirroring the model which Jamaica and Trinidad had used in the past to help qualify for World Cups. So in came brothers Leon and Carl Cort, players with Premiership experience, alongside other British-born players such as Christopher Nurse and Ricky Shakes. This was a team now full of European experience and ready to scale new heights.

In 2011 the second round of World Cup qualifying for the CONCACAF region saw Guyana grouped alongside a strong Barbados side, Bermuda, and Trinidad and Tobago, who were the undisputed favourites of the group, containing talented players such as Kenwyne Jones in the line-up.

Yet against all odds, Guyana managed to top the group, maintaining a solid defensive record throughout and qualifying for the next round with a game to spare: new recruit Leon Cort netting the decisive winner against Trinidad in the penultimate game. Captain Christopher Nurse recently reflected on this period of success, telling me that ‘we did not qualify by accident, it was through hard work, preparation, dedication, devotion, sacrifice and desire’.

Whilst appearing to be a ‘’fluke’’ to the casual observer, the performances of Guyana were merely the culmination of years of hard work and efforts to improve the infrastructure of the game amidst corruption within the Guyanese Football Federation (GFF).  Colin Klass had been President of the GFF for twenty-two long years, investing little into the development of the game in Guyana, but he hit the headlines in 2011 when he was banned from all football administration for twenty six months after being found to ‘’have breached various articles of the FIFA Code of Ethics’’ .  Unfortunately this sorry event wasn’t to be the end of Guyana’s off-field problems.

On the field however, things were progressing nicely for the Golden Jaguars, they were drawn with Mexico, El Salvador and Costa Rica for the next round of World Cup Qualifiers taking place in June 2012, and the first game at the historical Azteca Arena in Mexico will always be remembered as a landmark occasion in Guyanese footballing history.

Despite losing 3-1, Guyana made an impressive account of themselves, controlling the ball for long periods of time and maintaining a strong defensive shape. Unfortunately the rest of the campaign deteriorated, and Guyana found themselves bottom of the group with a solitary point by the time their last group game against Mexico came around, a ‘’home’’ tie which was very abruptly moved to USA in order to attract more Mexican fans and revenue.

The reason for this bizarre rescheduling of a home game was purely down to finances, yet the GFF did not declare how much the rights of the game had been sold for or what the money would be duly invested in.

GFF President at the time Franklin Wilson said the move to hosting in America ‘’was in the best interest of Guyana’s football development’’, yet the deal was one clouded by ambiguity and reflective of the nature in which the GFF operated. Christopher Nurse, even lamented at the time that the administrators ‘’just sit at the office and draw fat salaries when coaches and players are constantly deceived and lied to.’’

Nurse’s opinion of the GFF reflected a widespread view amongst players that the board was hindering any sort of substantial progress being made for the football team, and sure enough, events that occurred soon afterwards ultimately proved these fears to be true.

Despite the anti-climactic end to the World Cup qualifying campaign, it would be reasonable to assume that this historic period was the start of an upwards trend for  football in Guyana right? Wrong. Amidst reports of only being paid $12USD a day, numerous players went on strike during the 2012 Caribbean Cup campaign in November 2012, and despite being strong contenders to win the competition, Guyana failed to even qualify for the tournament, losing in qualification with a largely depleted team.

Christopher Matthias, who was elected as new GFF President in April 2013, recently came on National TV and remarkably declared that he did not believe in using ‘’foreign’’ (overseas-born) players in the Guyana National Team. So in the 2014 Caribbean Cup qualifiers, Guyana marked their return to International football by naming an 18-man squad which contained 17 young debutants all playing their club football domestically, with defender Walter Moore the only player chosen who plays his club football overseas.  To enter a major international tournament with virtually all the team making their International debuts and lacking vital experience is probably not the best logical move to make.

Furthermore, the manager named was not Jamaal Shabazz, or even Wayne Dover ( former National Manager who recently guided Guyanese club Alpha United to the CONCACAF Champions’ League group stages), but rather, Denzil Thompson, a former player with no previous experience of managing an international team, or even a top domestic club in Guyana.

The team with no experience of playing competitive international games rather predictably failed to win a single game in the qualifiers and embarrassingly scored zero goals in the process, losing to 159th ranked St Kitts & Nevis easily in their worst tournament performance since 1995. Ironically, the domestic league’s top scorer, Gregory Richardson, who bagged 20 goals in 15 games last season, was not chosen for the squad, neither were the core players of the 2012 Golden Jaguars team such as former Captain Christopher Nurse, Carl Cort, or talented defender JP Rodrigues, merely because they were not born in Guyana and are now considered to be ‘’foreign’’ by the current administration.

Other players who featured previously for Guyana, such as Trayon Bobb, arguably Guyana’s most talented young star, have been cast aside as the administration seeks to rebuild a team based on their own ‘’development’’ plan. To see the historic Golden Jaguars side disbanded in such a way can only be described as a footballing tragedy.

FIFA has tried to help Guyana in the past, earmarking them for the Goal project way back in 1999, a programme that provides substantial funds for smaller nations to develop their facilities, in Guyana’s case; this included building a stadium specifically for the National Football Team. However, Guyana is currently stuck on the first phase of development whilst neighbouring Caribbean countries have completed three phases as outlined by the project.

Current players in English football such as Nicky Maynard (Cardiff City) and Jerome Thomas (Crystal Palace) have Guyanese heritage, and had Guyana continued to show progress on the world footballing stage they may have very well opted to choose to play for Guyana. However, the sad truth is that the recent turmoil has set the team back years, possibly generations, and Guyana will no longer be seen as an attractive or viable option for these players.

So whilst we are all aware of what has happened to the Golden Jaguars, the question of when they will return to the heights of dominating Caribbean Football seems to be one nobody will be able to answer for the foreseeable future.