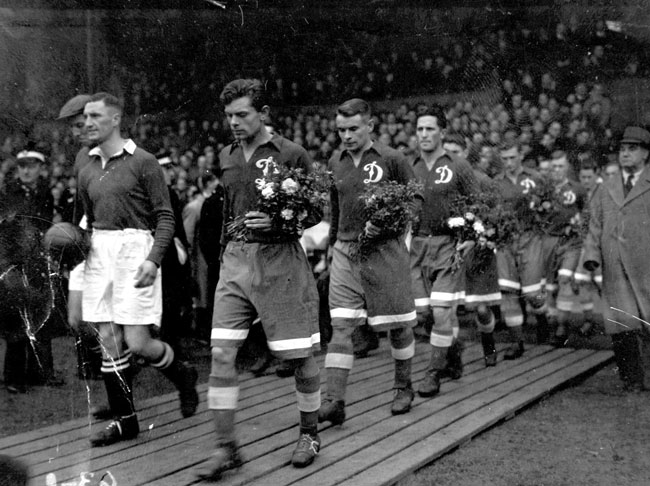 This, however, was not the first time the English had been warned. In fact, eight years before the infamous Wembley massacre, the visit of Russian outfit Dynamo Moscow had shown that football in this country was lagging dangerously behind the innovation taking place across the continent. This is the story of how a remarkable team taught English football a vicious lesson – a lesson it failed miserably to learn from.

It is somewhat understandable that sweeping changes in football have tended either to originate or to arrive last in Britain. After all, this is what comes of living on an island – the insular nature of the UK football scene has provided unique breakthroughs in the worldwide development of the game but, on the other side of the coin, it is what also has handicapped our ability to spot the developments occurring in Europe and elsewhere.

Even taking this fact into account, the blinding ignorance of those at the top of the English game in particular should have been shattered long before it eventually was.

1945 saw a goodwill tour of the UK from the USSR’s finest – Dynamo Moscow. During their short stay, Dynamo were to blow away preconceptions about just how well football in eastern Europe stood up to British standards. The Soviet champions ended their tour undefeated but to label that as their greatest achievement would be to do them a monumental disservice.

From the first game of the tour (a pulsating 3-3 draw with Chelsea at Stamford Bridge), it was clear that Dynamo offered something completely different to their British counterparts.

The Russians showcased an exciting brand of passing football known as passovotchka – a system relying heavily on teamwork and physical exertion, in which attacking emphasis through quick, incisive passing was the key.

The real genius of this tactic, though, lay in the intricate movement off the ball. Dynamo utilised a ground-breaking 4-2-4 formation, and at any time the front five or six could be found to be interchanging – providing a constant headache for opposition defences – as part of a system affectionately nicknamed ‘Organised Disorder’ by the Soviet press.

“The Russians were on the move all the time,” remarked Chelsea full-back Albert Tennant of the way the Muscovites flummoxed his team, “We could hardly keep up with them”.

Sound familiar? Many have claimed that this Dynamo side was the forerunner to the great Ajax teams of the late 1960s and 1970s. In other words – it could and has been said that the famous Dutch revolution of ‘Total Football’ had its roots in Dynamo’s lesser-known tactical innovation.

This step forward in off-the-ball sophistication was not as sudden as it must have appeared to a British audience. What they witnessed was the zenith of a way of playing that had been honed for over a decade previously.

The man who had set the wheels in motion was undoubtedly the great Boris Arkadiev. Having worked wonders with an unfancied Metallurg Moscow side in just his late thirties, he made the move across the capital to Dynamo in 1940.

Early title success endeared him to the club’s fans but a change in approach engulfing the Soviet game (one triggered by Russia’s very own football awakening – the embarrassing visit of an immeasurably more adept Basque XI in 1937) forced Arkadiev into a re-think.

A change to a more fluid version of the widely-used W-M formation, first introduced by Herbert Chapman in England, was followed by a gradual upturn in fortunes and he was crucially given the time to transform Dynamo into the driving force of wartime Soviet football (take note, Manchester United).

“Our players worked to move from a schematic W-M, to breathe the Russian soul into the English invention, to add our neglect of dogma,” quipped Arkadiev of his great side.

As the team matured, Arkadiev allowed for further evolution of his team – with a slow move to what may have been the first ever flat back four lending his tactic a more contemporary edge.

Even his departure in 1944 could not halt their progress as the club continued to go from strength to strength; winning the first Soviet Championship after the war under the tutelage of Mikhail Yakushin, and it was with this newfound sense of confidence that they arrived in England.

After their frenetic opening match against Chelsea – one full of Russian swagger and technical quality – Dynamo went on to win their next two clashes. Third Division Cardiff City were trounced 10-1 at Ninian Park before Arsenal were edged 4-3 in a truly extraordinary match in north London.

White Hart Lane, the Gunners’ home for much of the wartime period, was completely shrouded in thick fog that day with rumours of skulduggery and outrageous cheating, including both teams sneaking extra players onto the pitch, going down in folklore.

The impact they made on Britain was not nearly as seismic as it should have been, though. When the initial buzz surrounding Dynamo had died down, football on these shores continued largely as usual.

The nation’s players, still refusing until 1950 to partake in the World Cup, stayed largely set in their ways while the F.A. remained as arrogant as ever – trapped in a bubble that was so soon and so abruptly to burst. Even Tottenham’s brilliant push-and-run team of the early nineteen-fifties did little to turn the national tide.

Only when Puskas, Hidegkuti et al ripped the illusion of English superiority to shreds on that fateful winter day in 1953 did Britain sit up and take notice.

If only they could have learnt from the wonder that Dynamo had so stylishly given them the merest glimpse of.

For further reading, try George Orwell’s essay in The Tribune from 1945 on the Dynamo tour.