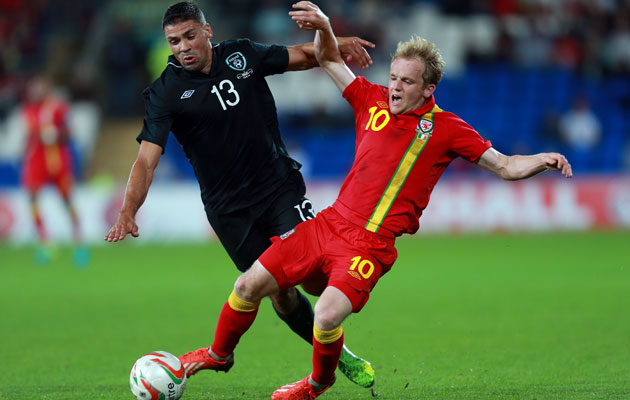 For small nations like Wales, a lack of strength in depth and reliance on a select group of key players is an age-old problem. Chris Coleman needs Gareth Bale, Aaron Ramsey and Joe Allen fit and available to stand any chance of qualifying for a major tournament, but their excellence cannot compensate for inadequacies in other positions. Fortunately, a trio of young players have emerged that are currently impressing on loan in the Championship.

Emyr Huws, Tom Lawrence and Jonathan Williams are all 20, were born within six months of each other and are enjoying prosperous spells at Birmingham, Yeovil and Ipswich respectively.

Huws, a former captain of Manchester City’s impressive under-21 side is a powerful central midfielder in the mould of team mates Yaya Toure and Fernandinho. He joined City from Swansea in 2009 and has already made his senior debut for both club and country.

At Birmingham, he was voted as their player of the month in his first month at the club, after man of the match performances against Derby, Watford and Huddersfield. He also scored a wonder goal from fully 35-yards out at Middlesbrough, a strike that garnered widespread acclaim and generated national interest. A welcome highlight in a desperately disappointing season for his temporary employers.

Lawrence has also excelled at one of the Championship’s strugglers, already relegated Yeovil. A graduate of the Manchester United youth system, he has been with the club since the age of eight, signing professionally in the summer of 2012.

After three goals in six games at Carlisle in December, the talented forward signed for Yeovil at the end of the January transfer window. Despite his best efforts, with goals against Huddersfield and Blackpool, he failed to inspire The Glovers, promoted from League One the previous year. Having represented Wales at Under-17, Under-19 and Under-21 level, a senior call is surely forthcoming.

Jonathan Williams has been in and around the Crystal Palace first team since 2011, but his progress was hampered by a broken fibula sustained on Under-21 duty. He was awarded the club’s Young Player of the Year award last year and has already made his mark at international level.

He made his debut in March 2013 as a half-time substitute for Gareth Bale and was instrumental in transforming a half time deficit in to a 2-1 victory in Scotland. ‘Joniesta’ was compared to David Silva by former boss Ian Holloway and Tony Pulis has claimed he has a “massive future” at Palace, where he is contracted until 2017. At Ipswich, he has reinforced their push for a play-off place and can look forward to Premier League football next season.

Huws, Lawrence and Williams do not only offer Coleman more options, they also reinforce positions that have been a glaring weakness for Wales in recent years. The squad is shaping up nicely for the forthcoming European Championship qualifiers, where a kind draw and an extra qualifying place has provided plenty of hope and optimism.