The disastrous past couple of years have not provided many reasons to cheer for the red half of the residents of Avellaneda, and so it is little wonder that supporters of Club Atlético Independiente have occupied their time reminiscing over past glories. The supporters of one of Argentina’s greatest club sides have many triumphs to console themselves with: 16 league titles and a record 7 Copa Libertadores trophies to name but a few. Relegation from the top flight in 2013 for the first time in the club’s history was indeed a dark day but there is good reason why El Rojo remain El Rey de Copas (The King of Cups).

While the Copa Libertadores winning sides of the 1960s and the four-time consecutive Libertadores champions from 1972 to 1975 understandably hold the spotlight there is another famous victory amongst these honours. The team of 1953 may not have the trophies of their successors but the day of December 8th lives long in the memory…the day that Independiente taught Alfredo Di Stéfano’s Real Madrid a footballing lesson.

In an era pre-European Cup, pre-Copa Libertadores and certainly pre-World Club Championships, there was scant opportunity for club sides to test themselves against international opponents. In a very different footballing landscape to the one that we are familiar with now, international club friendlies took on a far greater significance. This was an opportunity to claim at least an unofficial superiority over club sides from other nations and so these matches were understandably far more contested.

Earlier in the same year, Argentina earned what is recognised as their first victory over England with a 3-1 win in Buenos Aires. This is disputed by England, given that it was not a full strength side but FIFA and Argentina see otherwise. Regardless of its status, the Argentina national side that had seen off England and defeated Spain in that year drew heavily from the talent pool of Independiente.

Midway through the Argentine domestic campaign, during the annual winter break, Independiente was scheduled to tour Europe to be pitted against the best of the continent which had given football to South America. The already powerful Real Madrid was one such opponent and after being so impressed by the attacking prowess of Argentina’s strikers Madrid stipulated that Independiente must field those same players. Rodolfo Micheli, Carlos Cecconato, Carlos Lacasia, Ernesto Grillo and Osvaldo Cruz were all part of the Argentina side who had caught the eye, with Grillo and Micheli scoring the goals in the triumphs over England and Spain. 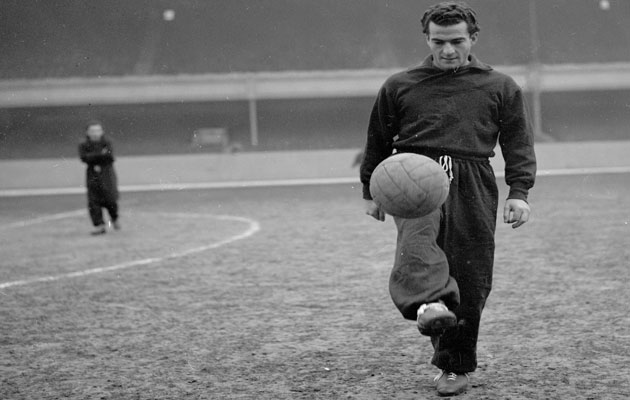 The draw of seeing this side face Madrid in the Estadio Charmartín, known now as the Santiago Bernabeu, was huge and so on December 8th 1953, one of Europe’s finest welcomed their South American counterparts.

At this point it is worth noting that not only did Real Madrid boast the great Alfredo Di Stéfano, they were sitting top of La Liga, went on to lift the trophy in 1954 and three years later won the inaugural European Cup. One of the greatest sides, fielding one of the greatest players in history, was in its infancy but remained formidable nonetheless.

Independiente lined up in a 2-3-5 formation, which to modern day football followers sounds outrageous but at the time was a common structure that despite its apparent imbalance was supposed to allow a side to flow from defence into attack. This has of course gradually become more defensive with full backs dropping deeper to make up the now more recognizable back four and focus on defensive duties, as Jonathan Wilson deconstructed in his classic tactical breakdown ‘Inverting the Pyramid.’ The front five in this Independiente lineup were the same that had terrorized England earlier in the year in Buenos Aires and inside the Charmartín, in spite of their lofty opponents, the result was devastatingly similar.

As perhaps can be expected given the formations, the match was open and Real Madrid had chances of their own with Independiente goalkeeper, Elías Abraham making a string of saves. However, El Rojo’s potent attack could not be denied and goals from Rodolfo Micheli and Ricardo Bonelli gave the Argentine tourists a two-goal lead at half time.

Bonelli was in fact an early substitute, entering the fray after an injury to Carlos Lacasia and it was his introduction that proved the catalyst. Bonelli’s trickery in tandem with the pace of his fellow attackers wreaked havoc among the Madrid defenders. Three minutes after the break, Ernesto Grillo scored a carbon copy of one of his goals against England. The pacy striker burst down the left before firing past Manuel Pazos in the Madrid goal from an acute angle. Carlos Cecconato added a fourth before Micheli completed his hat-trick with two late goals, ending the extraordinary rout.

Scoring six unanswered goals in Madrid still stands as a record home defeat for Los Merengues, only matched by Atletico Bilbao in the 1930-31 season. The record books may not show this as it was a friendly but make no mistake, this was not one of the meaningless financial exercises that we are more accustomed to now. The famous Madrid based newspaper, ABC wrote after the game “The reality was that the men of the Argentine side were superior individually and collectively in all areas. It is not shameful to lose in sports especially when the opposition is undeniably better.”

For obvious reasons, keeper Elías Abraham remembered more fondly his clean sheet and even earned praise from the great Di Stéfano himself, who couldn’t believe he and his teammates drew a blank. Abraham described the shock of the Real players at full time, saying, “At the end of the match, they had their heads in their hands.” Even in 1953 Real Madrid did not lose games in this manner.

The remainder of the European tour saw other notable victories against Valencia, Atlético Madrid, Benfica and Sporting Lisbon and in fact the only defeat on Spanish soil came against Bilbao, a match that was not originally scheduled. Abraham claims that this was added at the last minute by promoters to avoid Independiente leaving undefeated.

After starting the tour with the six-goal triumph over Real Madrid the annals of time render the rest of the tour slightly inconsequential. Independiente’s greatest achievements were yet to come, much like Madrid’s, though even in this year, El Rojo finished second in the Primera behind Boca Juniors, in what was an incredible era of strength for Argentine sides.

For this reason, the side of 1953 might not be heralded in the same way as those of the 1960s and 70s but this match still stands as a historic moment in the history of a club which has enjoyed more success than most could dream of.