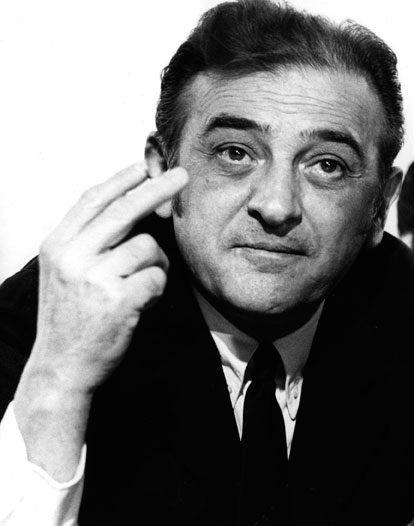 The great and the good assembled on an otherwise unremarkable Sunday afternoon, the season barely over and done with; rivalries put aside for the summer. They expected to hear ‘Happy Birthday’ but got something a lot more shocking to accompany their coffee and cakes.

June 6, 1971; the day after the final game of the eighth Bundesliga campaign and somewhere in the heart of Hessen, a 50th birthday garden party took an unexpected and sinister twist. Greengrocer and Kickers Offenbach president, Horst-Gregorio Canellas, assembled a guest list of celebrities, reporters and Fussball luminaries including the German national coach, Helmut Schön, to hear his revelations.

For the previous two months, Canellas had suspected that all wasn’t as it seemed in Germany’s top flight.  His Kickers side, who had beaten 1.FCKöln to become DFB Pokal winners and been promoted to the top division just 12 months earlier, were relegated straight back to the Regionalliga by virtue of one solitary goal in the goal difference column. Yet, having enjoyed a relatively productive spring period recording four wins, four draws and four defeats, they found themselves unable to pull away from the two relegation places, mostly on account of the form of the clubs who were also in danger of the same predicament.

Far from it being the product of an overactive imagination or sour grapes, Canellas‘ fears were proved to be well-founded, and now, as his party guests feasted on the Torten und Kuchen, his moment had arrived. An audio tape was played to the stunned gathering.

Famous names were at the heart of the deception; in May 1971, Köln’s international goalkeeper, Manfred Manglitz, was recorded offering to “let some things through”  in a game against Offenbach’s relegation-threatened  rivals, Rot-Weiss Essen, in return for 25,000 Deutschmarks.

Canellas’ curiosity at the scale of the corruption got the better of him. He tried to ensnare more conspirators on tape. Another Nationalelf player, Bernd Patzke, and his Hertha Berlin team mate, Tasso Wild, were secretly taped discussing a 140,000 Marks bribe from Canellas himself to guarantee a win over Arminia Bielefeld, who themselves were fighting against the drop. Patzke confided that he had already been offered 220,000 Marks to throw the same game by someone representing Bielefeld.

These calls were just the tip of the iceberg in what was the biggest scandal ever to hit German football. On that incredible day at the house of the Kickers Offenbach President, the whole sordid affair was blown wide open. For weeks to follow there was only one story on the front and back of the Zeitungen, and by the end of the investigations, it was discovered that 18 games which had directly affected the relegation battle of the 1970/71 season had been fixed in one way or another and that an incredible 1million Deutschmarks had changed hands in the process.

Canellas himself, far from being declared a hero for exposing the cheats, was banned from having any involvement in German football as a result of his part in the affair – his crime was to pretend to offer and accept bribes in order to collect evidence of the fraud – all with the cooperation of the DFB. He had actually resigned his position as Kickers’ President on the day of his garden party and despite having his harsh lifetime ban repealed in 1976, he never took office with a Bundesliga club again. As an aside, Canellas was involved in another major German news story of the seventies when he and his daughter were caught up in the infamous hijacking of Lufthansa flight 181 from Majorca to Frankfurt in 1977. Four Palestinian hostage-takers took the Boeing 737 across various European and Middle Eastern countries before GSG-9, the German police’s counter-terrorism unit, successfully liberated 90 of the 91 captives on the runway in Mogadishu, Somalia, after a five day ordeal.

Just seven weeks after Canellas’ party, Manglitz and Wild were also banned for life. Bernd Patzke got a ten year suspension. The final tally of players embroiled in the scandal came to 60 and 10 of the 18 Bundesliga clubs were also found to be involved – Arminia Bielefeld (who were forcibly relegated to the Regionalliga by the DFB in 1972), FC Schalke 04, Kickers Offenbach, 1 FC Köln, Hertha BSC Berlin, Eintracht Braunschweig, VfB Stuttgart, Rot-Weiss Oberhausen, Eintracht Frankfurt and MSV Duisburg. Rot-Weiss Essen, who had steered clear of any involvement in wrong-doing or bribery, paid for their honesty by suffering the indignity of relegation.

Perhaps the most abiding part of the story that still resonates with fans to this day, is that of Schalke 04. Their role in the whole scandal was actually quite minor. They had been guilty of accepting a suitcase containing 40,000 Marks to bribe their entire team. Although this was a fairly paltry sum in the grand scheme of the situation, the Schalke players took the money and subsequently lost their home game with Arminia Bielefeld, 0-1.  Included in the Schalke squad at the time were German internationals Reinhard Libuda, Rolf Rüssmann and Klaus Fischer; the latter is still Schalke’s record goalscorer and is best remembered for striking a memorable bicycle kick goal in the classic 1982 World Cup semi-final against France.

When brought up before the authorities for their misdemeanours, the Schalke squad would likely have avoided heavy punishment. However, to a man, they denied all participation and complicity in the affair. The prosecutor, Hans Kindermann, was adamant that they had lied and having pursued them for several years after the original offences, for which some received one year bans, finally had them put on trial in the district courts in 1975 for the crime of perjury. The infamy has remained with the Gelsenkirchen club ever since. Fans of several rival clubs still sneeringly refer to Schalke as ‘FC Meineid‘ – FC Perjury.

The scandal of 1970/71 left only a temporary, if highly damaging and embarrassing, stain on the reputation of the burgeoning Bundesliga. In the following season, attendances plummeted as supporters lost faith in the integrity of the sport at the highest level. But once Kindermann had begun to clean up the mess left behind by the affair, German football began to flourish once again; the World Cup finals of 1974 proving a massive success with spectators flocking to matches throughout the tournament which was gloriously won by the host nation.

It wouldn’t be long before club sides like Bayern Munich, Borussia Moenchengladbach and Hamburger SV would complete the Bundesliga’s rehabilitation and arise from the mire to dominate European football.