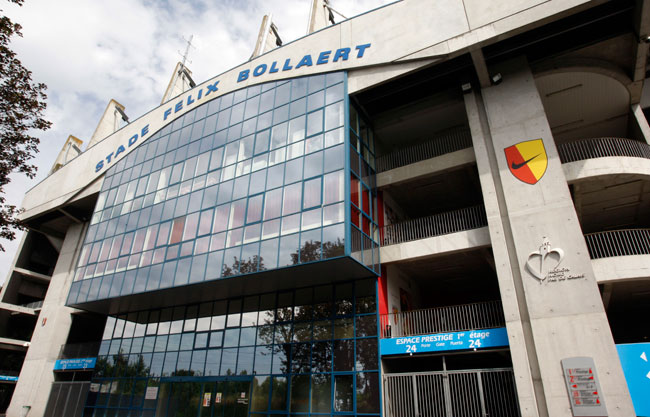 The Nord Pas de Calais region at France’s northernmost tip shares many similarities with England’s North West. A prosperous era as industrial hub followed the discovery and exploitation of coal mines in the 19th century, and the forced closing of these mines in the 1980s cast an economic shadow which both regions still feel today. Largely bypassed by tourists, shunned by political decision-makers, it is in these forgotten regions that both countries find some of their most adored football clubs.

Few clubs in France embody their region better than RC Lens. Just a hundred kilometers south of Calais into French territory, the city of Lens bears the colours and nickname paying a tribute to its mining past. Every other week, tribes of Sang et Or (Blood and Gold) fans sweep into Stadium Bollaert-Delelis, whose capacity of 41,229 makes it 4,000 seats bigger than the city’s population, with the enthusiasm and reverence of their grandfathers descending into mines where they would spend the day.

There does appear to be light at the end of the tunnel for RC Lens, relegated to the French second division in 2011. With the greatest fan base in France and its historical president back at the helm with an Azerbaijani billionaire in his pocket, the club is on its way back to Ligue 1 at the same time as arch-rivals Lille hold their own against much more opulent and popular rivals at the top of the French football hierarchy. These two clubs polarise the devotion of football fans in the Northern part of France, and their clashes (known as the ‘Derby du Nord’) are among French football’s most coveted derbies.

The translation of miners’ togetherness to the region’s foremost football clubs, revered and admired with arguably more passion than in other parts of the country, is also what led one man to dedicate his entire life to building the RC Lens institution. At the age of 16, uninterested by school, Gervais Martel is taken by his engineer father down into Pit 9 in Oignies, ten kilometres east of Lens. He witnessed the countless workers toiling in excruciating conditions, but with a sense of togetherness born of the adversity.

Almost thirty years later, chairing RC Lens as they celebrated their first ever French league title in the street, he remembered those same people flooding the streets. Gervais Martel, the man who built this club from root to tip, recalls the day that followed RC Lens’ last league title in 1998:

“I remember people surrounding us in the streets, their eyes filled with tears and some sort of recovered dignity. Forgotten by political leaders left and right, they were home to the best side in the country. What’s more, they identified with their players, hard-working and devoted to the task as were Tony Vairelles, Guillaume Warmuz, Anto Drobnjak or the late Marc-Vivien Foé.”

A relative stability followed the side’s title with six consecutive seasons in the upper half of the Ligue 1 table from 2001 to 2007. Much of this success down to president Martel’s sound financial management having convinced city mayor André Delelis to introduce him to the club’s administration board in 1986 with RC Lens collecting debt. Taking over fully in 1988, he stabilised the side financially and made gains every year from 1988 to 2007. This policy culminated with the side’s title and allowed Gervais Martel to dream big – perhaps too big.

In the meantime and despite an undying fan base, the side gradually deteriorated in quality with every player being replaced by a mildly inferior one. The first warning came in 2009 when the club was relegated to Ligue 2, but they promptly made their way back to the top flight the next season having won the title.

Martel had already survived two relegations during his tenure. For him, and despite his thorough approach to club finances, football is ultimately nothing more than a bit of a gamble. Asked to explain the failures that brought him to step down in 2012 he replied “have you ever tried drinking beer with your feet?” Football, its unfortunate injuries and last-minute winners, is not the most favourable ground for long-term business plans, as he would painfully learn later.

Two years after cruising through Ligue 2 and making a swift comeback to the French top flight, RC Lens were relegated again in 2011 with club legend Jean-Guy Wallemme departing as head coach, swiftly followed by Gervais Martel.

One often understates how much a football club can mean to its president. Players and coaches are here on a temporary basis and even if they love their side, they have such an immediate pressure to perform that it prevents a lot of them from enjoying their stay at their beloved club. Presidents on the other hand are generally here to stay and have more time on their hands – some would say too much time – for the development of their institution. When their time is up they can sometimes be as lost as a recently retired footballer or freshly fired manager. What’s more, finding a new occupation can be an even more daunting task.

For Gervais Martel, a former street hawker selling newspapers in the streets of Lens at the age of 16 whose lifetime ambition was to lead RC Lens as president because he was “not good enough as a player to make it on the pitch”, being ousted by new shareholders Credit Agricole (the largest retail banking group in the country) was a cruel blow. The man who just a few years before was speaking to the press about his RC Lens business plans for 2014 – 2019 was suddenly left on the fringes, surplus to requirements.

Spending most of his time watching sport and “listening to rock classics” (Chuck Berry, Jerry Lee Lewis, Little Richard – real music!), Gervais Martel bided his time and carefully prepared a comeback. Some may argue his passion for the role sometimes superseded his passion for the club, but he was determined. During his vacation in Cannes in August 2012, Martel was introduced to Azerbaijan investor Hafiz Mammadov, a billionaire in love with the game who already held shares in Atletico Madrid and FC Porto. After several trips to Azerbaijan, introducing Mammadov to club legend Jean-Pierre Papin and speaking of the youth academy that produced Raphael Varane and Thorgan Hazard in the recent memory, Gervais Martel convinced the oligarch to invest in his side and re-introduce him as club president.

Joint second in Ligue 2 alongside Angers, RC Lens brought in Antoine Kombouaré as head coach and plan to climb back to Ligue 1 as soon as possible, with a mid-term objective to have a quarter of their first team coming from the La Gaillette youth academy.

Gervais Martel is wary of the dangers of attempting to rival PSG and AS Monaco and will certainly look to keep a low profile once his men reach the French top flight. But the dedication and passion of the man for his club, alongside that of countless fans waiting to rekindle their rivalry with Lille in the Derby du Nord, is what French football truly needs at this time of criticism for a perceived lack of authenticity.