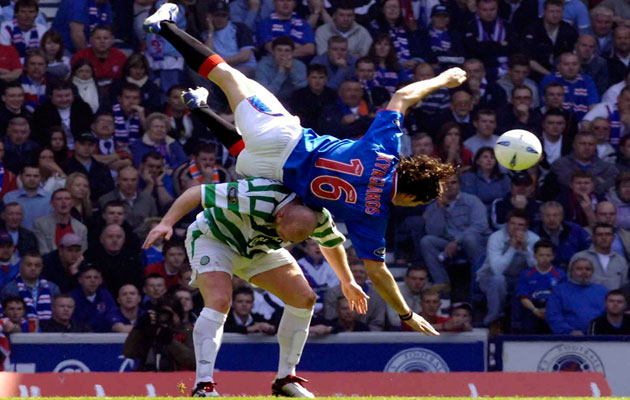 This Sunday will see the return of one of the world’s greatest derby games after a three year absence.

Hampden Park will host the first meeting between Celtic and Rangers since April 2012 in the semi-final of the Scottish League Cup.

Although the fixture has much in common with many other footballing rivalries across the globe, the religious divide between Scotland’s two largest clubs, gives any meeting that added edge.

Rangers the establishment club, followed largely by Protestants loyal to both ‘Queen and country’, while Celtic’s support base is largely but not exclusively Catholic. The club was formed in 1888 to help Irish Catholic immigrants integrate into Scottish society.

Their latest encounter comes at a time when the landscape of Scottish football has changed beyond recognition. Financial mismanagement and questionable tax arrangements led to the administration and subsequently liquidation of Rangers in June 2012.

Consequently the club found itself in the lower echelons of Scottish football but were aiming to get back into the Scottish Premier League (SPL) within three years and the Champions League within five.

Currently Rangers find themselves trailing leaders Hearts by 13 points in the Championship. Many supporters accept that a play-off is the only route to promotion, whilst others have resigned themselves to another season in the division. Ally McCoist stepped down last month as manager and is currently on gardening leave whilst his replacement Kenny McDowall has also handed in his notice.

Their most promising player Lewis Macleod has been sold to Brentford for £1 million and the club faces going into administration for the second time unless it can find £8 million by the end of February, according to Chairman David Somers. Meanwhile the Scottish Football Association (SFA) has blocked attempts by the current Newcastle United owner, Mike Ashley, from increasing his shareholding in Rangers, stating that such a move would contravene its rules that state that no individual can hold stakes in two clubs without the permission of the SFA board.

Furthermore the power struggle behind the scenes has taken a sinister turn with Police Scotland investigating death threats against current director Sandy Easdale. It has also recently emerged that former Bayern Munich and Fulham manager Felix Magath has bought a 1% stake in the club.

Graham Roberts spent a year and half at Rangers and was involved in one of the most infamous meetings between the two clubs in 1987. A particularly hostile encounter that saw the former Tottenham defender along with his fellow England internationals Terry Butcher and goalkeeper Chris Woods involved in a violent altercation with Celtic striker Frank McAvennie.

The former England number one along with the then national captain were both dismissed alongside the Celtic player. Roberts found himself in goal in a game that finished 2-2. All four were subsequently also charged by police accused of committing a breach of the peace. The cases against Roberts and McAvennie were not proven but both Butcher and Woods were fined.

Looking back on his own experiences Roberts said: “I have played in a number of Spurs and Arsenal games and they are passionate affairs but the Old Firm game is something different. If you lose to Arsenal on the Saturday by Monday life gets back to normal. Don’t get me wrong the fans are hurting but maybe because they are in a city like London, they have so many other things to be getting on with.

“Up in Scotland their lives revolve around a Celtic Rangers match. I remember once visiting a supporters club a few months after we had lost to Celtic. The result was the number one topic for those in attendance. It is hard to put into words what it means to the people and as a player the privilege of being involved in such a game.”

With Rangers lurching from one crisis to another – on and off the pitch – Celtic would be expected to command a comfortable lead in the SPL whilst also increasing the financial gap between themselves and their bitter rivals.

However Ronny Deila’s men only enjoy a 3 point lead over Aberdeen. Moreover Celtic’s failure to qualify for the Champions League has deprived the club of a minimum £15 million. According to some fans, on local radio phone-in shows, the Norwegian manager is out of his depth at the club.
Celtic face Inter Milan in the Uefa Cup but with attendances, albeit at league matches, averaging around 20,000, there is real possibility that Roberto Mancini’s men will not be playing at a full stadium when they visit Glasgow on February 19.

John Hartson saw his £5.5 million transfer to Rangers collapse after he failed a medical in 2000. A year later he signed for Celtic and during his five years at the club – he scored 88 goals – eight of them against Rangers.

“I have personally played in the North London Derby, a Midlands Derby when I was at Coventry. At international level I have played against England in a World Cup game but nothing prepares you for a Celtic Rangers match.”

“I knew the Old Firm was a big game but I was unaware of the religious dimension to the game. It is sheer hatred between the two sets of supporters.

“A week before the game I would struggle to drop my children off at school. Parents would come up to me to discuss tactics and tell me to pass on their advice to the manager. Children would tell you that they couldn’t face going to school on a Monday morning if we had lost. A derby game is for the fans. I know you have the big derbies in Istanbul and Milan and there is also the Real Madrid Barcelona clashes but for me the Glasgow derby is something extra special.”