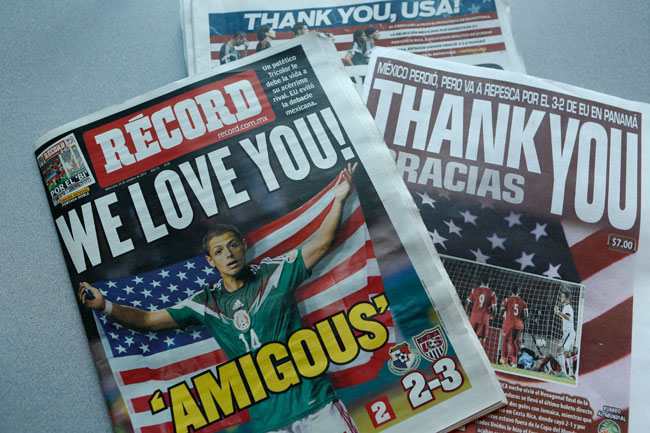 The feeling surrounding Estadio Rommel Fernández mirrors that of the Panamanian tropical monsoon.  Countless white, cotton handkerchiefs seemingly move in unison to wipe away the collective brow of La Marea Roja.  Thunderheads, per usual, drift in the vicinity, ready to inundate the stadium in an instant; and the anticipation, equal in both permeation and volatility, is reaching its crescendo…for after crashing out of the second round of 2010 qualifying, Panamá is back in the Hex.  And after defeating Honduras earlier in the spring, Panamá welcomes regional powerhouse México, both nations atop the standings.  Big points and big dreams are at stake.

In my former life I drove oil tankers.  Before you ask, the answer’s, no, I wasn’t captain.  It could be said that I was a sort of assistant manager to him, filling a position called “third mate.” But that means very little to those without a background in the profession.  Daily life was monotonous (i.e. no Leviathan, no rogue waves, many sleepless nights), but the merchant mariner mystique meant I liked it.  There was something intimately fulfilling about a successful port call, as there was about ringing “Departure,” the official indication we’d set out to sea.  And I’d be remiss to leave out the most attractive feature: two months off for every two months worked, all salaried.  Not a bad schedule in your mid-twenties.  But after several years the routine became cumbersome and the mystique less mysterious.  The night watches ticked by interminably and I found myself counting seconds to see if I could hit 60 the moment the clock changed.  ‘Get out or be trapped forever’ began to surround my days so I eventually left and returned to school.

Flash forward a year and I find myself, handkerchief in hand, haggling away for a chance to get into Rommel.  Swathes of red and blue move about in each’s own pre-match ritual.  Some sing.  Some dance.  All indulge and prepare themselves for [un]certain victory.  Televisions broadcast the ongoing qualifying matches around the stadium, and the familiar beat of the Latin American tempo drum is interrupted intermittently by the piercing sound of air horns, some near…some far.  The match is particularly interesting to me because I studied in Guadalajara in the spring (becoming an avid Atlas supporter along the way) and am currently interning in Colón.  My time in México only deepened my dichotomous relationship with the nation – love México, loathe El Tri – and my time in Panamá had already wrought in me sympathy for the cause – “MÍ lÍmite…El Cielo.  Nuetro sueño…ir al Mundial.”

The present day Panamanian squad is considered its Golden Generation.  Ask any Panamanian though and odds are they’ll demand “Fool’s” be stamped in front of Golden, not overly dissimilarly from that of the English.  Although runners-up in the 2005 Gold Cup, having defeated Colombia twice along the way, Los Canaleros managed only 2 of 30 points in the Hex, without a doubt the more important tournament.  Lacklustre performances in the 2007 and 2009 Gold Cups continued to tarnish anything resembling a Golden Generation and ultimately bookended the country’s most painful defeat to date: a 2-3 reverse to El Salvador.  After winning at home and claiming an early away goal, Panamá needed only to preserve the aggregate 2-0 lead for the remaining 75 minutes to advance.  But 50 minutes in, Cheyo Quintanilla, a journeyman midfielder currently belonging to Costa Rican club L.D. Alajuelense, guided a 25 yard direct kick into the upper left hand corner levelling the match 1-1.  Thirteen minutes following it, Estadio Cuscatlán – the largest in Central America – exploded after Cheyo was bundled over in the box and converted the penalty, putting El Salvador ahead.  The water-soaked pitch was hardly prepared to handle the frantic final minutes –  passes halting halfway due to puddles, patches of sod tearing from the earth, waterlogged boots trudging through the morass…but it didn’t have long to wait.  Just four minutes after the Quintanilla penalty, a speculative effort from RB Luis Anaya was deflected into the net and saw Panamá crash out of the 2nd round of CONCACAF qualifying, a round in which both Haiti and Suriname would advance.  Blas Perez, Luis Tejada, Jaime Penedo, and Felipe Baloy – its Golden Generation – were all in their prime.

I remember sitting in the stands of Rommel with a few of my Panamanian coworkers struck by the cheeriness of it all.  Boxes of beer – literally 20 individual cups – were on sale and fireman-brigaded to the terraces while The Wave cascaded around the stadium more times than I can remember. The national anthem nearly razed the stadium before kickoff and the tifo scenes were simple, yet elegantly constructed.  The band (weird, right?) played throughout the entirety within choreographed dance routines and the youthful exuberance of the entire occasion reminded me more of an adult’s Friday Night Lights, American-style football game than World Cup qualifying.  It was La Marea Roja, led by its aging stars – stars it had ridden since the 2005 Gold Cup finals – playing in a recently remodeled stadium, for what will most likely be its last shot at a World Cup for quite some time. Yet, the overwhelming sensation was confidence rather than nervousness, positivity rather than cynicism.

Each of these thoughts raced through my head as I watched the remaining minutes of the final matches in October.  A 63rd minute goal from Costa Rican Álvaro Saborío condemned México to the mercy of the United States (an inherently loaded statement geopolitically, let alone soccer-wise) and its match with Panamá.  México could not even accomplish what they had done so well over the course of qualifying – draw – and, consequently, balanced every El Tri-faithful on pins and needles for the remainder of the evening.  An 83rd minute go-ahead goal by Luis “Matador” Tejada only seemed to confirm the inevitable for the Mexicans as an entire nation inched its way towards perhaps its biggest soccer-related disappointment in history.  Conversely, with less than ten minutes in regulation, Panamá were defeating the mighty United States and headed to its first ever World Cup; Rommel threatened to tear the continents in two and a generation was about to finally fulfill its promise.  As the seconds ticked by I found myself counting along and realizing why on the bridge I was almost always early.  The way in which time dragged was excruciating.   I found myself pacing the bar – in South Carolina – picturing both my friends in México despondent and my coworkers in Panamá elated.  As I imagined the contrasting scenes a very peculiar feeling dawned on me:  I wanted us to lose.  I wanted the CONCACAF world shattered in two very different and very opposing ways.  I wanted an entire country’s fantasy to be fulfilled even if it meant heartbreak for an entirety of others.  Since I’ve never played fantasy I’ve never felt that awkward, inner conflict, when you kinda-sorta-maybe want your team to lose if it helps the fantasy squad.  But now I understood: Panamá was my fantasy squad.

By now you’re aware of the result.  A 92nd minute Graham Zusi leveler preceded a 93rd minute Aron Johannsson winner and two Latin American countries were, indeed, shattered, although for the opposite reason I had hoped: Panamá because it had missed its last great chance and México because it would be forced to thank America for a trip to Brazil.  My social media lit up as you’d expect: sardonic Americans, humiliated Mexicans…and – above all – truly morose Panamanians.  I actually found myself angry with Zeus, something I recognized as being completely irrational.  Most of all though I swear I felt at least a small piece of the heartbreak – albeit much differently – that an entire Central American country had lost not only the World Cup, but its Golden Generation, as well.