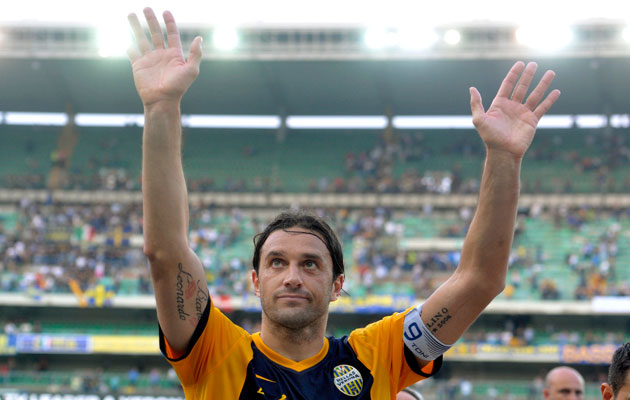 They say that form is temporary, but class is permanent. Well in Serie A, Luca Toni and Miroslav Klose continue to maintain both form and class well in to the twilight of their esteemed careers.

Toni ended the season as the league’s top scorer with Inter’s Mauro Icardi, one of the division’s star turns. The fact that Toni recently celebrated his 38th birthday and is 16 years Icardi’s senior highlights just how remarkable that feat is. A little further down the chart, Klose netted 13, the same as former Palermo phenomenon Paulo Dybala, who has since been rewarded with a £24m move to champions Juventus.

After a year at Al-Nasr in the UAE Arabian Gulf League, Toni returned to his native Italy in 2012 to play a bit part role at Fiorentina, where he played his best football between 2005 and 2007. Unsatisfied with a lack of first-team football, he left to lead the line at newly promoted Verona the following year, his 16th club in a nomadic 20-year career.

When quizzed by Gazetta dello Sport as to why he was extending his decorated career, he stated: “Running after a football, scoring goals, celebrating and suffering in a stadium has been my whole life. As long as I am enjoying myself, I will continue to do it.”

He scored twice in his debut, a 2-1 win against Milan, and the goals have continued to flow ever since. His 42 goals in two seasons, a remarkable haul at a mid-table side, has also seen him sail past the milestone of 300 career goals, joining a rarefied group of players that have achieved that feat. In the aftermath of his goal, in a 2-1 win over Udinese, he revealed: “I’m super-happy, it’s been a perfect day.”

In the final game of the season, Toni came face to face with Carlos Tevez, one of his main contenders in the race for the Capocannoniere. Toni found the net but Tevez saw a penalty saved, as Verona goalkeeper Rafael celebrated by pointing at Toni and mimicking his trademark, cupped ear celebration. With little to play for, Verona remained motivated by Toni’s pursuit of the top scorer title and they will be delighted that he has since agreed to remain with the club for a further year. 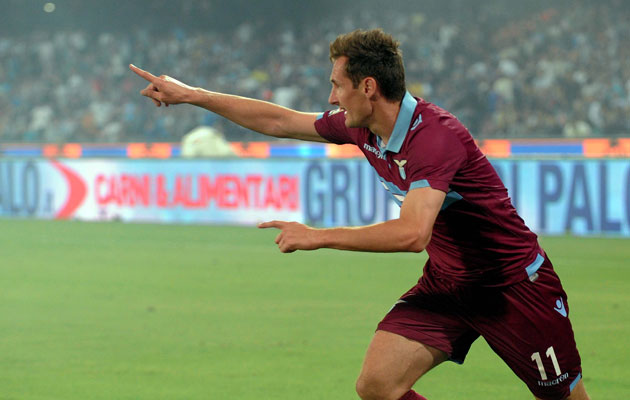 Klose, who recently celebrated his 37th birthday, had spent the whole of his career in Germany’s Bundesliga before joining Lazio in 2011. His 48 goals in 115 games have seen him achieve legendary status in Rome, were he has been instrumental in a gradual rebuilding process that has resulted in this season’s third-place finish and a return to the Champions League. Utilising a solid 4-3-3 formation with Klose leading the attack, Lazio significantly improved on ninth-place in 2013/14, despite only modest transfer activity last summer.

With limited resources, they have managed to overtake the likes of Fiorentina and Napoli, clubs with far greater budgets. Their season culminated with a pivotal fixture at Napoli to decide third place and Stefano Pioli’s men upset the odds to seal a 4-2 win, capped off by a Klose goal in injury time. He also received rave reviews after an impressive showing in a 3-1 win against Milan, with Tuttosport proclaiming: “Klose plays like a teenager and drives the Milan defence insane.”

With an array of league titles and individual accolades between them, the legacies of these World Cup winners was already assured, but Toni and Klose’s recent achievements have surely elevated them amongst the greatest players of their generation. Neither has ever been particularly fashionable and they never had any pace to lose, but as long as their hunger and fitness remains, Toni and Klose have proven that they will always score goals.