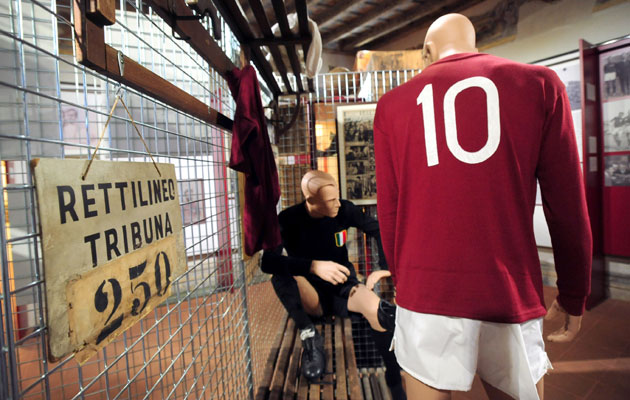 “He alone is half the squad. The other half is made by the rest of us together.” – Mario Rigamonti

A stone’s throw from the shoreline of the Adriatic Sea towards the heel of Italy’s boot shaped land mass is the Arena della Vittoria. It is no longer an away day for the Italian football supporter as i Galletti moved into the modern Stadio San Nicola in the early nineties.

Steeped in character and history it is somehow a forgotten place. Since 1934 it staged 945 Serie A and Serie B games and occasionally played host to the greats: Rummenigge, Platini and Maradona.

Perhaps the most special moment to have been witnessed there came from the boot of Valentino Mazzola on the 24th of April 1949. None of the 40,000 or so spectators at the time knew that this strike eleven minutes in would be his last goal in a competitive game for Il Grande Torino.

Ten days after the 1-1 draw at Bari, while returning home from a friendly against Benfica, the plane carrying the squad found itself in a heavy fog and crashed at the Basilica of Superga. There were no survivors. The team, i Granata, which contained some of the greatest names of their day in perhaps the greatest Italian club side ever had perished.

Torino had wrapped up their 5th Scudetto in a row just before the game in Portugal. Forced to field a youth team in the final four Serie A matches of the 1949 season the club didn’t have a Busby to turn to. Although Torino finished sixth the following season Il Toro never recovered. The squad was truly irreplaceable. Castigliano, Rigamonti, Fadini, Menti, Loik, Gabetto and Ossola were adored and looked up to. And they in turn looked up to the captain Mazzola.

The club became great with Mazzola as its attacking midfielder. His talent was limitless and his rolled up sleeves were a show of motivation to his teammates but a statement of intent to his opponents. In that famous maroon jersey he achieved major honours but in the blue of the national team he was perhaps an uncrowned king. In the aftermath of WW II poverty was rampant across Italy and the people needed an inspiration, a group of giants to look up to. The imagination of the nation was captured by the national team in a 3-2 victory against Hungary which contained a youthful Puskás. Italy’s ten outfield players that day were all from Torino.

He commanded every yard of every pitch he played on. In 1948 during a game against Genoa the Torino goalkeeper, the temperamental Bacigalupo, had been sent off. Mazzola, rather than delegating duties and running the game in the opponents half, rolled up his sleeves and played the remaining minutes in goal. Torino held on to win 2-1.

When he had the ball at his feet the supporters, which made up the 30,000 strong crowds at the Filadelfia would hold their breath in excitement. His class and skill on the pitch, two footed and great in the air, he was the hero the locals came to see. Over the course of his time at Torino he scored 118 goals in 204 appearances three of which formed the fastest tripletta in Serie A scored between the 29th and 31st minute against Vicenza in 1947. This record still stands today.

His first period as a footballer started when he turned out for his local Alfa Romeo team in Milan but became a regular for Venezia after a successful trial. Here he met Ezio Loik who joined Torino with Mazzola in the season of ’42. This partnership formed the structure of an era of great success and the five titles in a row could have been more but for the interruption of the war.

The war also killed off his international career. The chance to play under the spotlight of the world stage never presented itself. Cancellation of the 1942 and 1946 World Cups meant that Mazzola’s on the pitch success was limited to home soil and some of the best players Italy have produced never got their international recognition.

Football’s heroes help fans fall in love with the game while montages of Garrincha, Pele, Seeler and Beckenbauer recorded on that evocative sepia Kodachrome stick in the mind forever. They allow those of today to see how great those of yesterday really were. Without Mazzola and his teammates from Il Toro those images lack a certain echt. It’s a shame then that this player was from a pre football on film age, an age when word of mouth and newspaper print could secure a romanticised status.

Very few teams and players get to define their generation. The Torino squad of the mid 1940s skippered by Mazzola achieved that. He was one of the all time greats who sadly the modern hair style era of football has forgotten too easily. On those ‘definitive’ all time top ten player lists which do the rounds on various media it is unlikely Mazzola or indeed any player from Il Grande Torino appears. For all those involved with the club their knowledge of the calibre of excellence is perhaps all that matters. Absence is the best form of presence.

While remnant scraps of footage of the great team can be found after much digging around the web the Filadelfia stadium is just about the best tangible ornament which remains of Il Grande Torino. Time has been cruel to it however. The old stone and concrete rubble look sullen and it has deteriorated into the wreckage of a forgotten theatre where fans were once delighted and awestruck by their local idols. Movements have been made for a redevelopment of the site. How quickly these come into fruition is anyone’s guess.

Perhaps one of the greatest players ever to play the game was surely the best to never play in a World Cup. He was deprived of greater club success during the war and despite winning a host of honours he never did get chance to reach his full potential. Had that accident not have occurred just what would have become of him and the club in the years that followed?

The current Torino side is enjoying its third successive season in Serie A and qualified for this year’s Europa League. It’s a team on the rise with more stability than in the previous decade. The Stadio Olimpico di Torino possesses some of the hallmarks of its older brother but has not yet seen anything like the wave of success of that victorious era.

There is only so much time for sentiment and the reality for the current crop of players can be satisfaction with a solid run in Europe. If this gradual improvement continues Il Toro may be locking horns with Europe’s greats.