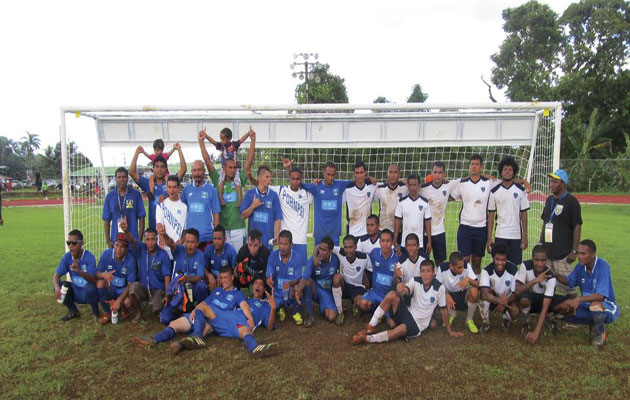 The idea of a national association president using crowdfunding to get his team to a tournament, and then leading the line when he gets there seems fanciful. But that’s exactly what Charles Reklai Mitchell did with Palau at the 2014 Micro Games.

Pohnpei, one of four islands in the Federated States of Micronesia (FSM), was hosting the eighth Micro Games in July and it was the first to include football as a medal sport. For Palau, one of the last independent countries still not recognised by FIFA, attending was vital to developing the sport, but the players were told they had to pay $300 apiece to cover the 3,000km trip.

Mitchell set up a crowdfunding scheme on GoFundMe.com with the aim of raising $5,000. After the appeal raised pledges of $3,275 the Palau organisers made up the shortfall for the trip to Pohnpei, where a $120,000 grant from the Japanese consulate helped provide the football facilities.

Tropical rainfall and giant frogs are a problem for footballers in Pohnpei and despite the investment, Mitchell admits: “The field wasn’t in its best form, but games went on.”

The Oceania Football Confederation (OFC) had no involvement but the organisers flew in two referees from Fiji. For Mitchell, the tournament was a big success: he was joint top scorer as Palau reached the Final.

That had all looked highly unlikely at half-time in their first game. Three-nil down to Pohnpei, Mitchell found the net to boost the team’s confidence, and they thrashed Chuuk – another FSM island – 5-0 in their next game. A 2-2 draw with Yap ensured a place in the Final and rematch with Pohnpei.

Mitchell, who had also scored against Yap, was on target again in the first half to make the scores level at half-time before Pohnpei went on to win 3-1 again. “For the first time having football in the Micronesian Games, I’d say it was successful,” said Mitchell, who was raised in the United States in San Diego.

A keen footballer, Mitchell found a dying game when he arrived in Palau seven years ago. The national side had played two games at the 1998 Micro Games, when football was an exhibition event, but lost 15-2 to Guam and 12-1 to the Northern Mariana Islands. Despite
the formation of the Palau Football Association in 2002, the sport lagged behind baseball and basketball in terms of popularity.

Mitchell has since taken football into schools and set up a league, and although expats still make up 80 per cent of the players, Africans, Japanese, Nepalese and Taiwanese players all feature. Palau’s Bangladeshi community has even fielded its own side in the five-team league, which was last won by Taj. All matches take place at the national track-and-field arena in the main commercial centre of Koror.

Palau was cited as a priority for membership in a 2011 FIFA Small Nations Working Group report. After being contacted by Mitchell, FIFA “pointed [him] to the relevant regulations and procedures listed in the FIFA Statutes”. That means joining the OFC first. Mitchell says he has contacted the confederation but not yet received a reply. The OFC, however, claim to have never heard from Mitchell or anyone else in Palau.

With a functioning league and national team, the PFA would appear to merit some help, but with the current stalemate none seems likely.

Location: Palau comprises around 250 islands south east of the Philippines. Formerly a United Nations Trust territory, it gained independence in 1994.