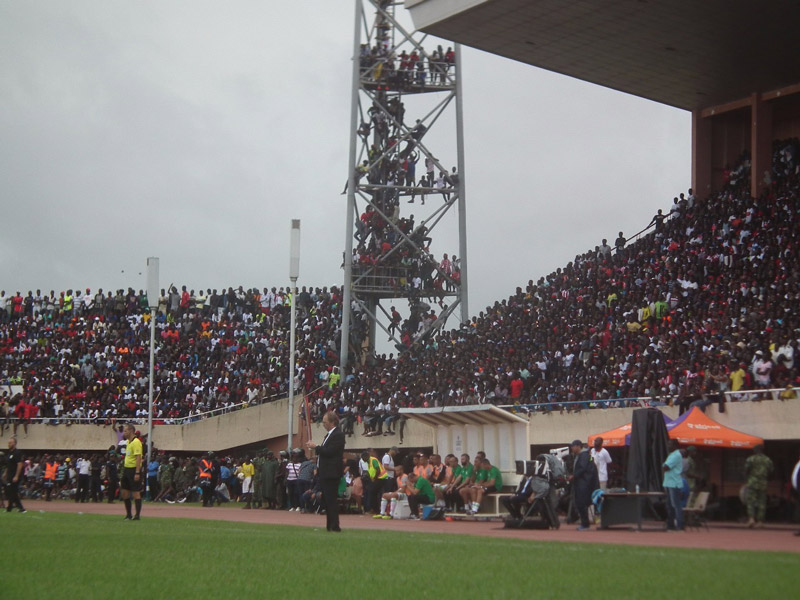 For a country that often exceeds a tiny playing base at youth level, The Gambia consistently disappoints at senior level but under Belgian coach Tom Saintfiet that is beginning to change.

After twice winning the Afcon championships, the West African nation with a population of 2.1 million has appeared at two U17 World Cups and even beat Brazil 3-1 in 2005, but until last year had never won a competitive away match a senior level.

That bogey was laid to rest last November with an impressive 3-1 win in Angola that gives Saintfiet’s team a headwind in the 2021 Afcon qualifiers.

“Before I came, the team had not won a senior match in five years,” says Saintfiet. “When I came, I made discipline on the pitch so the players understand what they need to get results.”

After winning another youth tournament in Autumn 2018, the locals began to get behind the Scorpions and 40,000 people – the biggest crowd for a football game in the country – crammed into the 25,000 capacity Independence Stadium for a 2019 Afcon qualifier with Algeria.

With thousands of fans scaling floodlights for a glimpse of Riyad Mahrez, the start was delayed by an hour and a half before the game finally started. A 1-1 draw started a senior bandwagon rolling that is gaining speed.

“This is our time,” says captain Pa Modou Jagne. “Tactically, we are more disciplined and everyone is sticking to the game-plan we are given. Before it was not like that.”

The FC Zurich defender is one of more than 60 Gambians playing at various levels in Europe alone. Not a single player in Saintfiet’s squad plays domestically. He explains: “Players get $40 to $50 a month in the Gambian league, which only runs from December to April. It’s very difficult to live on that so if you can live from football you go abroad.”

Just getting a contract abroad is viewed as an achievement and many do not push on to match the likes of Jagne, who has carved out a decade long-career in Switzerland.

Mattar M’Boge, coach of Gambia’s U17s and U20s teams, says: “There is a mentality of our players that once they are on $5,000 a month or whatever they have made it. Some players like Pa Modou push themselves to the highest level but a lot don’t.”

While Saintfiet has players at big European clubs such as Bubacarr Sanneh at Anderlecht and Musa Barrow, senior game time can be limited. Sanneh is on loan at Goztepe in Turkey and Barrow at Bologna from this year’s surprise Champions League package, Atalanta.

The Belgian marshals his team based on resources, playing deep and hitting opponents on the counter-attack. The system has brought some impressive results. A 3-1 win over Benin and home and away draws with Algeria revived Gambia’s 2019 Afcon qualifying hopes only to fall short.

Subsequent results like a 1-0 friendly win in Morocco last June and a 2-2 draw with DR Congo that, allied to the Angola success, put Gambia on top of their Afcon 2021 qualifying group, have been impressive but not all locals like their team’s style.

“The public want us to play attacking football like Barcelona,” says M’Boge. “Tom has been criticised back home for playing counter-attacking football but he wants to get us qualified. The tactics suit the team.”

The Gambia have never qualified for a senior Afcon, M’Boge has no doubt the impact would be profound, adding: “People think there is a curse, that we will never get to an Afcon and if they can turn on the TV and see our team at an Afcon it will change everyone’s mentality.”

That will have to wait as Gambia’s destiny was due to be decided in late March by home and away qualifiers with Gabon, which have now been postponed due to the coronavirus.

The Gambia’s aspirations have to take a back seat in the face of the unprecedented events of the coronavirus but Saintfiet’s team have a bright future when normality returns.