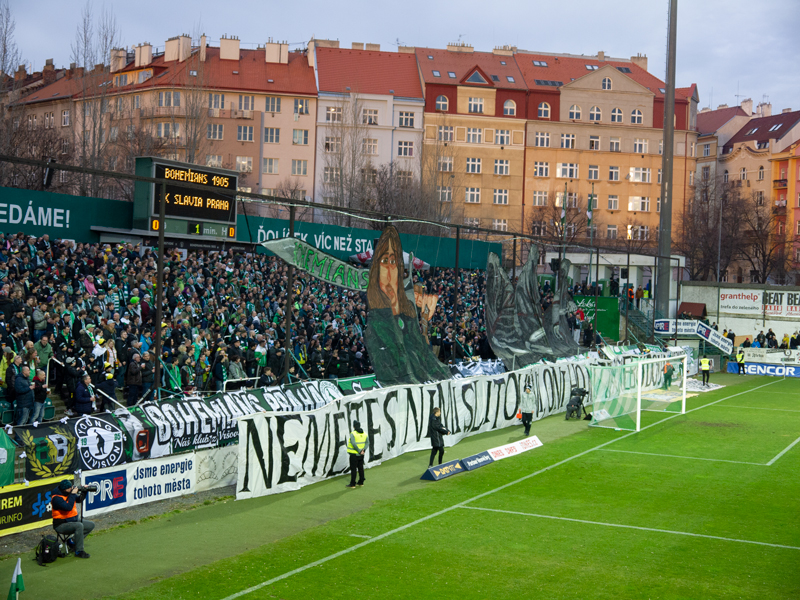 Steve Menary: The Trials And Tribulations Of Slavia Prague

After 301 days, Bohemians achieved what no other club in the Czech League has managed and beat Slavia Prague.

The reigning Czech champions had emerged from the midwinter break with 17 wins and three draws in the first half of the season. Buoyed by Chinese owners and led by Jindrich Trpisovsky, Slavia are too good for the rest of the Czech league. Or were.

Shorn of a host of influential players, Slavia struggled to overcome a dogged Bohemians side backed by the usual cacophony of smoke bombs and drums in their crumbling Dolicek stadium. After a goalmouth scramble, Jan Vodhanel stabbed home for a 1-0 win.

“We did what Barcelona could not and we scored at home against Slavia,” laughs Martin Kurka, Bohemian’s gregarious supporter liaison officer.

Slavia only picked up two points in the 2019/20 Champions League group stages – one at the Nou Camp – but along with cross city rivals Sparta are the heartbeat of Czech football. The defeat was double-edged for Trpisovsky, who grew up watching games at Dolicek with his Bohemians’ supporting father.

He made an immediate impact, winning 36 of 70 matches and a chance to manage in the top flight at Slovan Liberec two years later. While at Zizkov, Trpisovsky had recruited a young defensive midfielder from Slavia on loan called Tomas Soucek. At Liberec, Trpisovsky again loaned Soucek and took the club into the Europa League group stages. 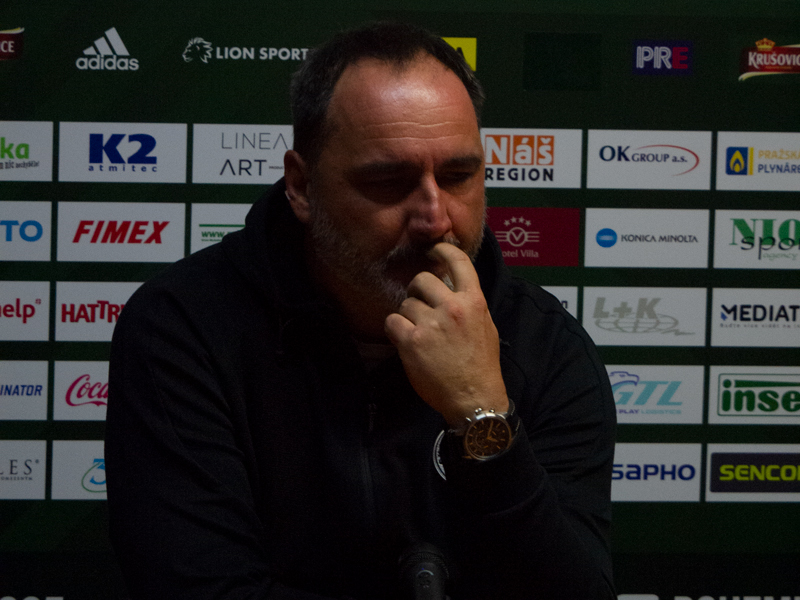 Slavia were watching. The club’s Chinese owners, Sinobo, had bankrolled a first league title in a decade in 2016/17 with older players but changed strategy.

“Slavia came with their money and they took five players and our coach and even our press officer,” sighs Tomas Carnogursky, general factotum at Slovan Liberec and now also the PR.

“Slavia’s new owners changed everything in Czech football. In the past it was our strategy to buy talented players from Slavia and Sparta as they had enough older players and these young players could not get in the first eleven.

“Then after two or three years they became better players and we sold them back. Now Sparta and Slavia have big squads and they loan out lots of players.”

A couple of years ago, Slavia reportedly had 70 players on contract with swathes sent out on loan and unable to play in matches against their parent club.

In 2019, Sparta signed Liberian midfielder Oscar Dorley from Slovan. The player was loaned back but the deal went through on the day of a game between the two clubs. At the last minute, Liberec had to find a striker from the bench.

The growth of loans also favours the duo in other ways. In their first game after the restart, Sparta entertained Slovan but were disjointed and squandered possession. The game’s best player, Romanian international Alexandru Baluta, created an opening for Tomas Malinksy to score in the 76th minute then again for Slovan’s first win at Sparta since 2012. Baluta is on loan from Slavia.

Slavia and Sparta, who are owned by Czech billionaire Daniel Kretinsky, are domestic predators but are prey abroad.

Under Trpisovsky, Slavia’s hard running side knocked out Seville on a run to the Europa League quarter-finals last season and won the domestic title. That attracted attention and in the winter break, Trpisovsky lost the heart of that side.

At 33, captain Milan Skoda went to Turkey’s Rizespor on a free. Defensive midfielder Alex Kral joined Spartak Moscow for 310m Czech crowns and Josef Husbauer signed on loan for Dinamo Dresden to the end of the season, when the deal should be made permanent.

The biggest loss was Soucek, who came to a similar agreement with West Ham. If the deal is finalised, the €20m price tag will beat the domestic transfer record paid by Borussia Dortmund for Tomas Rosicky in 2001.

“I don’t know what happens in the summer if West Ham come down,” says a phlegmatic Trpisovsky. “It depends a lot on how he plays. If he plays like the first game, there will be interest from better clubs, I believe he will have a lot of offers.”

Monaco and Spartak Moscow were also interested in Soucek, whose 70 million crown pay packet was the highest in in a league where the minimum wage on a pro league deal is 10,000 crowns a month.

Trpisovsky has the cushion of a big lead at the top but must rebuild in the second half of the season.

“We lost a lot of tall players,” says former Slavia centreback Jiri Bilek. “We can be quick and make a pressing game but now we are a small team.”

Bilek played for Kaiserslautern Germany and Poland’s Zaglebie Lubin, then returned to finish his career at Slavia. After retiring in 2017 he now runs the youth set-up and has no doubt the popular Trpisovsky, who wears a trademark white baseball hat and watches games with his hands plunged into tracksuit bottoms, is up to the task.

“Trpisovsky knows what he wants to play and the type of players that we wants,” says Bilek. “I have never seen a coach with his style before. He is always three steps ahead. I played for 20 years and never had a coach like him. The atmosphere is very different. He’s like a friend but he also knows when to be their boss.”

Slavia’s owners will want a Champions League return but with only six qualifying places available, the top of Europe’s footballing pyramid is slipping into the distance

Bilek adds: “The rest of the world will run away and we can’t catch them. We can be successful but just in our world. We wanted to keep Soucek but we have to sell him because of the financial side.

“Our place, if we are realistic is the Europa League. Of course, we can dream of the Champions League but the rules have changed.”

UEFA is creating a third European competition that Czech clubs could win that but there is little appetite. “It will be split regionally and no-one will be interested. It will end up like the Inter Toto Cup,” says Stepan Hanus, head of PR and communications at the Czech Football League.

As Europe’s top clubs motor off with more UEFA money, the Czech league struggles to play catch-up. The most expensive season ticket at Slavia is only 3,800 crowns. Price rises are unrealistic. “Most clubs are just happy to see lots of fans in the stadium,” says Kurka.

In 2016, the top two divisions split from the federation and negotiated an improved TV deal, which started in 2018. Slavia got one million crowns for winning the 2018/19 title league and 12m crowns from TV rights.

Hanus admits: “If we compare it to Belgium or the Netherlands, it’s still a very low level.”

The money is shared equally but TV money only represents an eighth of Slovan’s €4m budget. While Slavia’s budget is around €50m, Bohemians get by on €3.5m but only 40% goes on wages as the club has to maintain Dolicek.

“Just to break even in Czech football you need to play in Europe or you lose money. You need a strong owner,” shrugs Bohemians’ director Darek Jakubowicz, whose family own 51% of the club. 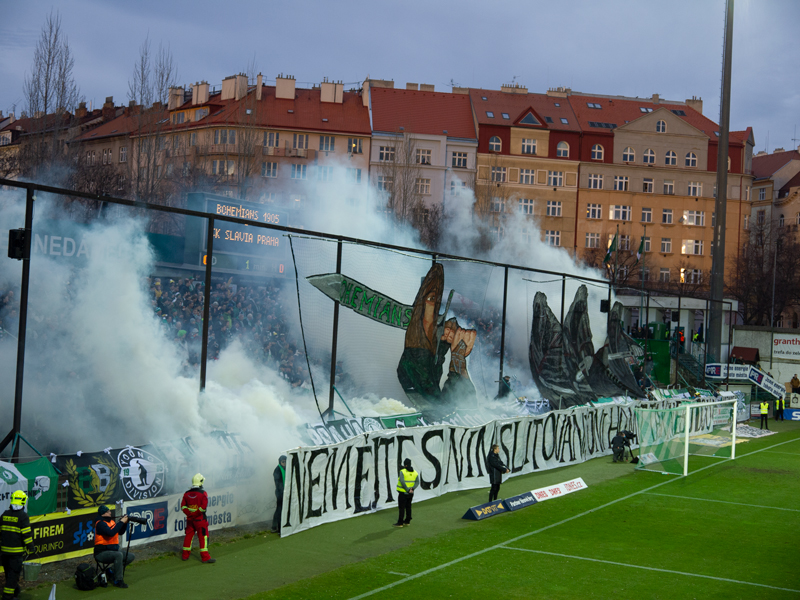 The clubs are discussing whether to change the existing arrangement of seven matches a week on pay TV and one on free-to-air. Even tweaking a deal that runs to 2035 will not generate more money and the league are looking at other ways of raising income.

“There are three options,” explains Hanus. “The clubs can find another TV market for the league, or we can decrease the number of professional clubs. Everyone that talks about Czech football knows that 32 clubs is already too many but we have to agree.

“The other option is to make a new market with another country like Slovakia or Slovenia.”

The Czech Republic split harmoniously from Slovakia in 1993. There is appetite for recombining the leagues in Bratislava but none in Prague.

Another option is esports. Czech clubs have not been on FIFA’s eponymous game since 2011 after the federation asked owners EA Sport for too much money. Four sides – Bohemians, Sparta, Plzen and Teplice – have esports arms and the league is pushing to get back on the platform.

Like the TV rights, any increase in money would be shared equally, which 31 of 32 clubs support.

“Slavia disagree with the model a bit,” says Hanus. “They are a modern club and speak to clubs in Belgium and the Netherlands and in the Champions League. I can see their point of view but they are the only ones.”

Slavia are looking to compete with the rest of Europe just as UEFA appears to be pulling up the drawbridge to protect the elite. “This is the most important discussion,” adds Hanus.

For the ambitious Trpisovsky, any discussions used to be in Czech, which made him less attractive to overseas suitors, but the most feted Czech coach of the modern era has begun learning English.

Slavia went into the virus lockdown with another league defeat to Slovacko followed by a 1-1 draw with Sparta but remain eight points clear of second-placed Viktoria Plkzen.

When football resumes, if Trpisovsky succeeds in rebuilding Slavia and making inroads into Europe whenever continental football returns, his players will not be the only ones attracting overseas interest.