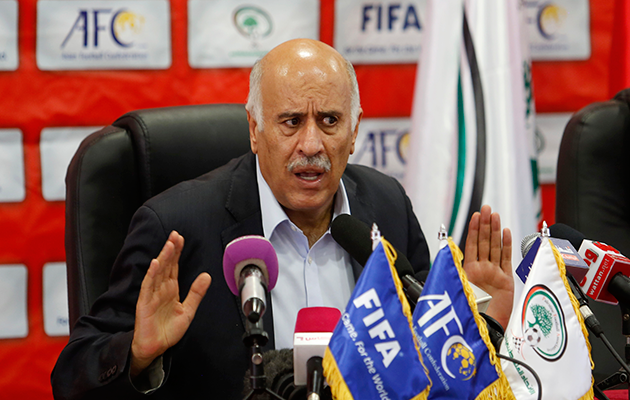 FIFA risks being drawn into a political crisis far beyond the significance of any of the internal storms which have battered the world football federation over the past decade.

Increasing tension in the Middle East may lead to Palestine reviving its demand that FIFA Congress should expel Israel, a proposal which has been taken off the table at the last moment three times in the last four years.

Israeli anger at the recent United Nations reaffirmation of the illegality of the settlements plus the imminent inauguration of Middle East hawk Donald Trump as United States President threaten to further sour relations; inevitably sport would be caught in the fall-out.

In 2010 and 2011 the then International Olympic Committee leader Jacques Rogge as well as Sepp Blatter, in the last years of his FIFA reign, indulged in shuttle diplomacy to try to ease restrictions imposed by Israeli security on the movement of athletes and sporting goods into the Occupied Territories.

Blatter set up a mediation taskforce to head off the first Palestine threat to bring an Israeli expulsion proposal to FIFA Congress. A panel including leaders from both European federation UEFA (of which Israel is a member) and the Asian Confederation (which includes Palestine) appeared to make some minimal progress.

However in 2015 Palestine sports supremo Jibril Rajoub – head of both national Olympic committee and football federation as well as a leading Fatah official – ran out of patience and sought to force a new vote in congress.

Blatter, with some nimble political footwork and despite Rajoub’s reservations, bought him off again by creating a new monitoring commission under South African anti-apartheid campaigner turned businessman Tokyo Sexwale.

No progress has been achieved. Sexwale could not present a substantive update to FIFA Council earlier month and was handed four more weeks to come up with a status report to be considered in February by the FIFA ‘bureau’ (Infantino and the head of the six confederations).

Virulent pressure groups – pro-Palestine and pro-Israel – have been ramping up the antagonistic noise on both sides of a divide whose length, depth and width has been expanded by the row over six settlement clubs which play in the Israeli league.

Palestine has objected that, since the UN has outlawed the settlements, the clubs’ participation in Israeli competition is a direct and flagrantly deliberate contravention of FIFA statutes.

The Israeli policy of developing settlements in the Occupied Territories is one of the bitterest of political disputes.

Statements from President-elect Trump suggesting a provocative transfer of the US Embassy from Tel-Aviv to Jerusalem coupled with eager anticipation by Israeli Prime Minister Benjamin Netanyahu of Friday’s inauguration have raised both temperature and fears.

At the weekend Rajoub said: “If Mr Trump wants to translate his campaign propaganda into actions, no one should expect the Palestinians to surrender.”

In all the circumstances, Rajoub may feel he has no option but to revive his Israeli expulsion proposal at FIFA and, this time, press it to a vote in Congress in Bahrain in May. Football is minor stuff in the bigger game but Rajoub’s own credibility, status and personal ambitions are on the line.

The settlement clubs issue has handed Rajoub specific cause.

FIFA statutes say that a member association may be expelled either because it has not paid relevant fees, has lost its domestic status or – crucially as in this case – “seriously violates the statutes, regulations or decisions of FIFA.”

The likelihood is that an expulsion proposal would be defeated because it needs a three-quarters majority (159 out of 211 members); UEFA’s 55 nations, in solidarity with a fellow member, would vote largely against expulsion as would a significant number of the US/Canada-influenced members of central and north American confederation CONCACAF.

But Rajoub may consider that the act is more important than the outcome. The Palestine FA may believe it must be seen – both back home and in its own Middle Eastern context – as unwilling to back down any more.

Of course all the sporting diplomacy in the world is small stuff compared with the greater global issues at play.