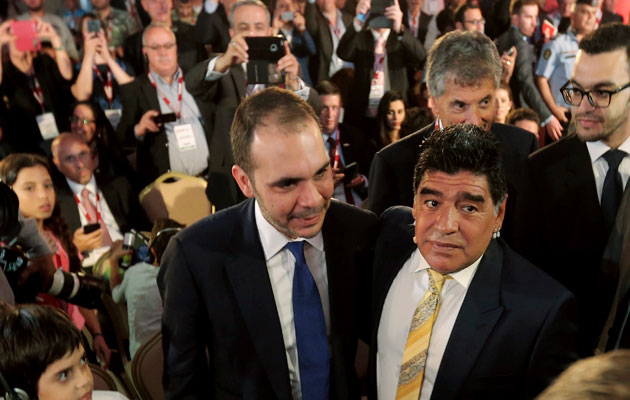 Diego Maradona has thrown his now-considerable weight behind Prince Ali’s bid to oust Sepp Blatter . . . and launched a scathing attack on the 79-year-old FIFA president who is favourite to secure a fifth term in office.

Maradona, captain and inspiration of Argentina’s World Cup triumph in 1986, has been an inveterate critic of FIFA presidents since the days when the world federation was commanded by Brazilian Joao Havelange.

The 54-year-old made no secret of his support for Prince Ali of Jordan’s bid to unseat Blatter while attending the Soccerex Asian Forum at the King Hussein Bin Talal Convention Centre on the banks of the Dead Sea.

Maradona combined his endorsement for FIFA’s outgoing Asian vice-president Prince Ali with a withering attack on not only Blatter, who has been president since 1998, but on the entire FIFA edifice.

He said: “If I didn’t believe Prince Ali would be a good president, I wouldn’t be here. As the football world knows, inside fFFA there is total anarchy, where there is only one man who decides everything. But he knows absolutely nothing.

“Therefore it is time for a change . . . because even his colleagues should actually advise him to leave.” 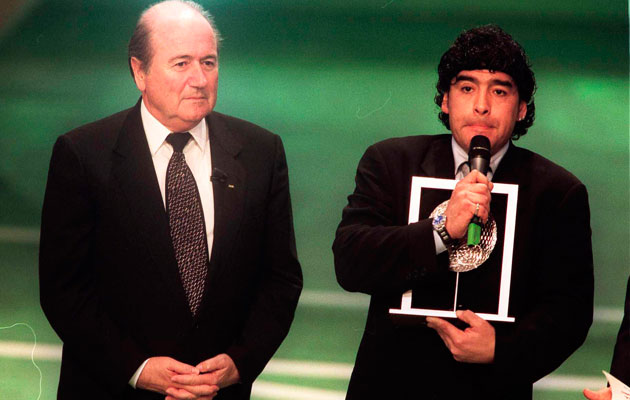 Blatter’s regime has seen FIFA recover from a threatened financial collapse to a TV and sponsored-driven enrichment which has accured reserves of $1.5bn. However his 17 years in office have also been scarred by the fall-out from the ISL scandal and corruption allegations over the 2018-2022 World Cup bid process.

Maradona continued his assault on Blatter’s record by adding: “He has done a lot of damage to football since he has been there. It’s time for him to step aside and let us, who are full of strength, renovate football, because football is becoming poorer and more corrupt.”

Blatter fortified by the legal analysis of ethics judge Hans-Joachim Eckert, has insisted that there is no proven reason for the World Cup awards to be challenged. He has said that he want to continue to pursue his ‘mission’.

But Maradona had a different opinion. He suggested that Blatter wanted to remain in office out of a need to defend his own record and legacy.

Maradona said: “Without any doubt whatsoever Blatter is scared. He’s scared of being left out of his share of the cake.

“That is what really annoys someone like me, who has played in four World Cups. I was chasing the ball, Blatter is chasing champagne.”