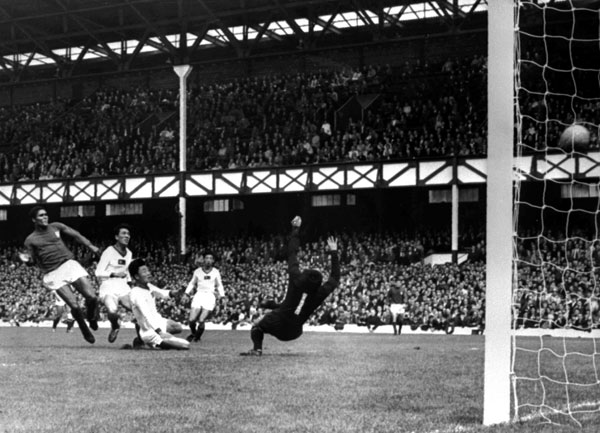 The sad demise of Eusebio elicits so many memories. I was lucky enough to watch his devastating performance in the European Cup Final of 1962 in Amsterdam when in the second half he tore the Real Madrid defences to shreds.

Turning the tide after Ferenc Puskas, by then the weightier Trotting rather than the Galloping major, had scored a notable hat trick, once on a superb Alfredo Di Stefano pass going unopposed half the length of the field to score with a left foot as formidable as Eusebio’s dynamic right.

But in the second half there was little Real could do against Eusebio’s electric pace, ball control and dynamic shooting. Easily negotiating Di Stefano, he ran on into the box, where a desperate foul enabled him to drive home the penalty.

He would eventually apply the coup de grace when Mario Coluna, whose left footed shooting that evening rivalled Eusebio’s right, touched him a free kick, from which his ferocious shot took a deflection and soared into Real’s net.

But the vignette which has always stayed in my mind occurred in a match I didn’t actually see. I was working on the official film of the 1966 World Cup Finals, Goal! When I saw the aftermath of Eusebio’s second goal against the astonishing North Koreans, in the quarterfinals at Everton. The Koreans had gone into a staggering 3-0 lead in the first twenty minutes.

Eusebio pulled one back then after Jose Torres the huge centre forward had been brought down in the box, banged home the consequent penalty, dashed into the net, grabbed up the ball and hastened towards the centre circle. But before he could get there, his way was blocked by an expostulating little Korean. A man from Mozambique confronted by a man from Pyongyang. What could they possibly have been saying to one another?

In the event, Eusebio would score twice more and Portugal would prevail 5-3, just as Benfica did in that European Cup Final. You wonder just what would have happened had Bela Guttmann, that wonderful wily Hungarian manager, once himself a notable attacking centre half, twice gone to the same barber as Carlos Bauer, Brazil’s elegant right half in the 1950 World Cup finals.

By then managing a Brazilian club, he told Guttmann, at their second meeting for a haircut, about a phenomenal young forward he had seen in Mozambique, while on tour there with his team. So Benfica were able to acquire Eusebio for a very modest fee though they had to go to court to get the better of their eternal rivals, Sporting Lisbon.

Eusebio was not only a gloriously talented player; he also had the courage and persistence to play through pain. As he did in the 1968 semi-finals of the European Cup against Juventus, when a badly injured knee caused him severe pain. Despite this, he excelled in both ties, each won by Benfica thanks largely to his goals, one of them dramatically scored from a 35-yard free kick.

In the Final, one remembers him being thwarted, when through alone on the Manchester United goal, by a glorious one handed save by the keeper Alex Stepney, who brushed Eusebio’s extended hand away as he tried to compliment him. That shot was with Eusebio’s left foot rather than his devastating right.

Angelic of countenance he may have been, but he wasn’t always angelic on the field. On that occasion he committed a harsh and painful foul on United’s Scottish right half, Pat Crerand.

But he will long be remembered for his cornucopia of talents. As little Nobby Stiles deserves to be recalled for the way he largely subdued Eusebio on the 1966 semi-final at Wembley; where one had seen Nobby as a splendidly attacking right half in a schoolboy international for England against Wales. Nor did he resort to dubious methods to contain Eusebio. Though he had previously lamed the French attacker, Jacky Simon, and stayed in the team only because its manager, Alf Ramsey, stubbornly rejected all attempts to drop him.

Ironically, despite the negative response of such managers as West Ham’s Sam Allardyce and Aston Villa’s Lambert, the average third round attendance was actually up on the previous years. But there were some sad figures, not least at Wigan, the Cup holders.