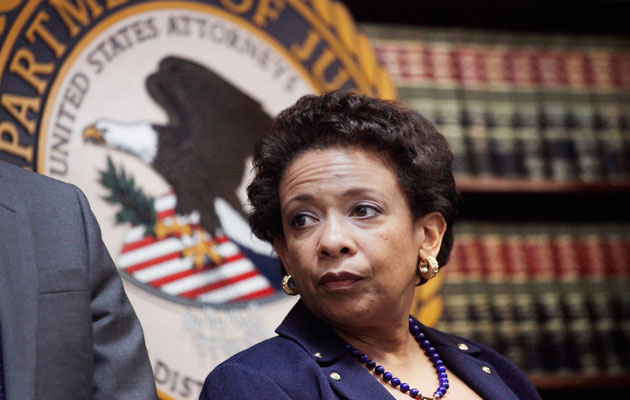 A confident prediction of a further wave of arrests in the FIFAGate corruption scandal has been delivered by Loretta Lynch, the United States Attorney-General.

Lynch’s words will send a shiver of fear through the world football family, not least those in and around Sepp Blatter, departing president of the world federation whose vast offices were just a few miles away atop the hills overlooking the city.

Blatter and members of his governing executive committee had hoped that the American investigatory zeal might be satisfied with the indictment handed down in May against 14 senior FIFA-linked officials. This is not the case.

Criminal investigations roll on, not only out of the United States but also, separately, in Switzerland, where Alpine property has been seized and bank accounts frozen by local investigators.

Lynch indicated that the forthcoming arrests could involve not only individuals but also ‘entities,’ potentially including not only companies but football bodies. She would not comment on whether Blatter might be among the individuals.

The Attorney-General had commandeered centre stage in the FIFA corruption saga back on May 27 when she revealed details of the fraud, conspiracy and corruption charges against 14 FIFA-linked officials and businessmen.

Hours earlier seven of them, including two FIFA vice-presidents, had been arrested pending extradition in Zurich. This was two days before the congress at which Blatter was re-elected for a fifth term in office.

The weight of scandal played a decisive role in his decision, only four days later, to announce his impending departure. A new president will be elected at an extraordinary congress next February 26.

Lynch was in Zurich to address a conference organised by the International Association of Prosecutors and which could hardly have chosen a more coincidentally appropriate – or pointed – venue for its 20th anniversary event.

Appeared at a news conference with her Swiss counterpart Michael Lauber, she said: “In the four months since May our work and the investigation has continued. Thirteen of the 14 defendants have been arrested either by us or by other authorities. Three have been arraigned in a federal court in Brooklyn; 10 others are pending extradition in Switzerland and three other countries.

“Our investigation is ongoing and has expanded since May. On the basis of new evidence we anticipate pursuing additional charges against individuals and entities.”

Lynch praised the co-operation of the Swiss authorities before launching into a stern warning about the threat of corruption to the worldwide game and the imperative need for reform of its governing structures.

She said: “The problem of corruption in socer is global and we will remain vigilant. One hallmark has guided our work: all individuals involved in soccer, this beloved sport through which we teach sportsmanship, integrity and fair play, must be committed to reform and compliance with the rule of law.

Lauber confirmed that his Swiss investigators, in a separate but parallel inquiry, had seized alpine apartments and other property in their inquiries into FIFA business. Work focused initially on the bid process for the 2018 and 2022 World Cups but widened in scope as agents turned up further evidence of possible wrongdoing, including money-laundering.

He said: “[Our] investigations led to a specifically designed task force, house searches in the western part of Switzerland and further evidence being collected. Financial assets have been seized including real estate, including flats in the Swiss Alps; investments in the real estate can be misused for the purposes of money laundering.

Lauber also confirmed that contracts for the sale of World Cup TV rights would also be examined by his department after weekend revelations concerning contracts signed off by Blatter in favour of former CONCACAF president Jack Warner.