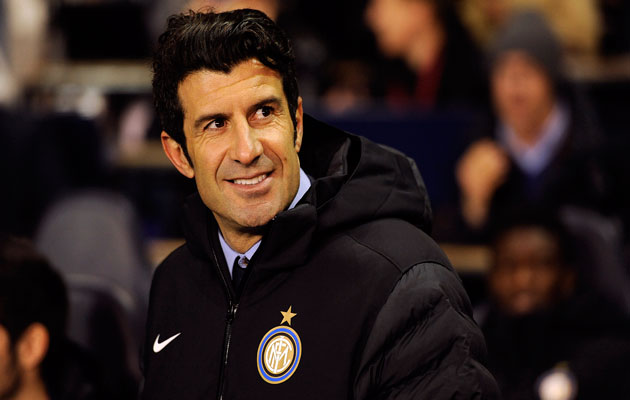 Then there were five . . . after Luis Figo announced that he, too, wants to run to unseat Sepp Blatter as president of FIFA in May 29.

The former Sporting Lisbon, Barcelona, Real Madrid and Internazionale forward, pulled no punches in his candidacy declaration, saying that an internet search for FIFA matched it with the word “scandal.” He said: “Football deserves better.”

The one-time Portugal captain is confident he has the necessary five nominations from national football federations to vault the first hurdle which is a major step. He also has the support of Premier League managers Jose Mourinho – a compatriot – and Ronald Koeman.

The deadline for applications is January 29 and then FIFA’s new electoral committee, headed by Swiss businessman Domenico Scala, will assess whether candidates fulfil the requisite conditions. These include five nominations from national associations and two years direct activity in the game over the last five years.

Figo’s playing record suggests he may be a more popular European candidate with UEFA president Michel Platini than Van Praag. Last August Platini insisted that the game needed former players in leading roles, rather than administrators.

Speaking about his campaign, Figo said: “Football has given me so much during my life and I want to give something back to the game. I look at the reputation of FIFA right now and I don’t like it. Football deserves better.

“In recent weeks, months, and even years, I have seen the image of FIFA deteriorate and as I speak to many people in football – to players, managers and Association Presidents – so many of those people have told me that something has to be done.

“Throughout my career I have worked at all levels of the game. This has given me a unique insight and understanding that I feel can enhance the discussion about the future of FIFA and the future of football.”

Figo made 577 appearances for Sporting, Barcelona, Madrid and Inter and captained Portugal at the 2006 World Cup during an international career in which he won a national record 127 caps.

A statement issued on behalf of Figo, who has served on the UEFA Football Committee from 2011–2015, said he would “run a campaign for change, focusing on better governance, more transparency, increased solidarity and the protection of true football values. A detailed programme for positive reform will be unveiled in the coming weeks.”

Figo added, “I am convinced that FIFA’s position as the governing body of world football is absolutely vital. For this to be preserved it is essential that we see change at the top and we set FIFA on a new course which is all about football and less about politics.

“This is why I am looking forward to getting on the road in the coming weeks, to explain in detail my programme and my vision. My aim is to nourish my plans with the insights and ideas of the national associations, to listen to their concerns and to provide a forum for a new approach to FIFA which is focussed on FIFA’s stakeholders rather than just FIFA.

“Football runs through my veins. I am a man of football, inside out and I am ready to help bring about change.”

Figo’s opinion of himself was endorsed by Mourinho who said: “Luis Figo’s candidacy is a great step forward for football. His career over many years guarantees a better future for FIFA.

“I believe in his character and determination, as well as his passion for the game. He will be a president focused on football and its general improvement, acting closely with all federations.”

Koeman said: “Figo’s candidacy is an opportunity for the change of FIFA. I know him personally and I know that this is a decision based on the need of giving a new direction to an institution that suffered extensive damage in the past years.”

Out of the running, however, is Mayne-Nicholls. The leader of FIFA’s inspection of the 2018 and 2022 World Cup bids, was thought to have had problems obtaining unanimous support from ‘his own’ South American confederation. He praised the candidacies of both Prince Ali and Van Praag.

The presidency vote will take place on May 29 during the world football federation’s congress in Zurich. Incumbent Blatter remains an overwhelming favourites to win a fifth term in office. He was elected originally in 1998 after serving as development officer then general secretary and chief executive under Brazilian Joao Havelange.