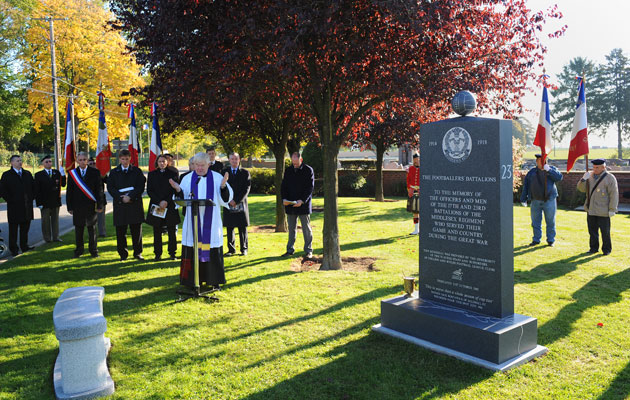 What about the Football Battalion? Strangely enough, in an otherwise compelling and well researched article in a national daily about soccer players and the First World War whose outbreak has just been commemorated, there isn’t a mention of that battalion, which would surely have gone some way to adjusting the balance of what in effect is a criticism of football and footballers behaviour after the outbreak of war.

It would be nearly another year before football officially shut down. The whole 1914-15 season was played out, culminating with what came to be known as the Khaki Final, so many of its spectators at Fallowfield, Manchester, being soldiers in uniform. For the record, Sheffield United defeated Chelsea, then barely a decade old as a club.

The Footballers’ Battalion was commanded by Major Frank Buckley, a man of some military experience and briefly an England international centre half. It fought in France and was wholly composed of professional players. Buckley of course went on to become the famous manager of Wolverhampton Wanderers, alias The Buckley Babes, renowned for the way they produced and profited from young players.

After the second world war, he took over at Leeds United, something of a contrast with Leeds’ latest, surprising appointment of the obscure Dave Hockaday who has hitherto never managed, as opposed to coaching, a League club.

The article points out that there was some resentment that football should carry on normally when the war had been running since August 1914. When it came to the second world war, the Government’s attitude was that the much rationed and bombarded, civilian population might be somewhat consoled were footballers allocated to Army and RAF physical training duties, enabling soccer albeit in a somewhat fragmented way and with abundant use of “guest” players, to continue.

Though it was predictably regionalised largely between North and South. Thus Aldershot, then a very modest Third Division South club, found itself deploying the whole celebrated England half back line of Britton-Cullis-Mercer, with big Frank Swift, due to become England’s goalkeeper, and the prolific Tommy Lawton in attack. Though strange to say Aldershot in those heady days didn’t manage to win anything.

I recall an angry letter published in a Sunday paper from a mother whose son was serving saying that she had gone to watch the team that she supported play, eager to tell him of the youngsters who had replaced the regular players, all presumably off to the war. To her dismay and disgust, she found the team virtually unchanged!

I remember Frank Butler the Daily Express columnist writing, during the war, that when it began, the pimply young men prepared to watch their footballing heroes leaping on to beaches and jumping out of aeroplanes, only to find to their surprise that they were doing this themselves.

You could hardly blame the conscripted players for this. Besides there were very notable exceptions. The whole Bolton Wanderers squad promptly enlisted in the Army, their adventures through France, the Middle East and Italy chronicled in a splendid book, Wartime Wanderers.

Tom Finney having as a 19-year-old right winger in 1941 electrified English soccer with a glorious display for Preston against Arsenal at Wembley in the Football League War Cup Final, went on to serve with the Army, in tanks, for years to come; returning just as dazzling as when he had left. There are many other examples.

Speaking of Hockaday and Leeds, this seems an astonishing gamble of an appointment by the new Italian owner of Leeds United, Massimo Cellino, embroiled during his regime at Cagliari in alleged excesses, but passed by the League as a fit and proper person to own the club.

For Hockaday though he has coached widely in numerous clubs, some of them substantial, has never managed at League level and indeed proclaims himself essentially a coach who will leave all matters of transfer and the rest to Cellino and his aides.

Somewhat ominously, his stint as an actual manager with Forest Green – his only one – was, for four seasons, barely mediocre. Though the club had the largest budget in the Conference Premier League, under his aegis it never came higher than 10th and was twice all but relegated.

Leeds supporters have already voted over 90% against his appointment. The mystery is how Cellini, whom he likes and much respects for his football knowledge, ever heard of him at all. Why Leeds ever got rid of his experienced predecessor, Brian McDermott, Cellino alone knows.

Meanwhile, Hockaday has my every sympathy. He has been furnished with a job lot of Italian players and already has lost his outstanding goalscorer to Fulham. I think he is a very brave man but even Major Frank Buckley might find it beyond his abilities to keep this leaking ship afloat. And, after all, Brian Clough lasted there for only 44 days.