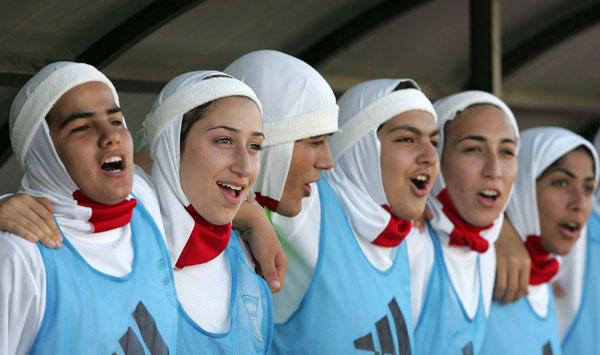 At least one major football country and its football authority remains implacably opposed to the worldwide permit for women football players to wear a headscarf: France.

The French football federation issued a statement of defiance last month within hours of football’s lawmakers ratifying the permanent continuance of what had been a provisional allowance.

Two years ago Prince Ali bin Al-Hussein of Jordan, world federation FIFA’s Asian vice-president, had pressed the case of the headscarf at senior level to encourage the development and spread of the game among girls and women in the Islamic world.

Even sceptics such as Belgian Michel D’Hooghe, head of FIFA’s medical committee, were eventually won over after it was proved that a specially-designed headscarf offered no danger on the field of play.

IFAB has even now adopted the description of ‘head cover’ to remove any religious or cultural connotation from the issue. The use of the words hijab and even then headscarf were considered discriminatory after Sikh players sought equal treatment.

Last month the annual meeting of IFAB, as expected, formalised permission for use of a head cover.

Prince Ali was delighted. He said, via Twitter: “Happy for our girls and boys regarding IFAB’s decision today on confirming headscarf/ head cover wearers to play football. Football is indeed for all.”

He has refrained, diplomatically, from commenting on the reaction of the French football federation.

In a rapid-response statement it had said: “The French football federation, a member association of FIFA, has taken note today of the decision of the International Board to allow players and players under its own international competitions, to wear a veil or turban*.

“This decision, which is only the technical application of a first step in July 2012, also allows federations who wish to apply it in their own competitions.

“As regards the participation of French national teams in both international competitions and national competitions, the French Football Federation reiterates its concern to respect the constitutional and legislative principles of secularism prevalent in our country and in its statutes.

“Under these conditions, it maintains the ban on the wearing of all religious or denominational signs.”

Article One of the French constitution defines the country as a secular republic.

To this extent the FFF response to IFAB’s decision may be going beyond the precise letter of French law. Indeed, it may indicate that head coverings are permitted . . . but only for non-Muslims.

Several leagues and federations in northern Europe have welcomed the clarification that men – in the coldest climes – may also wear head coverings. Presumably these would be acceptable even for men in France on grounds of protection against the cold but not for women.

So what happens next?

As a FIFA spokesman said: “The modifications come into effect only on June 1, 2014. Any issue would be addressed by the IFAB at the time based on the specific facts and circumstances.”

** The FFF interpretation of the IFAB decision was factually incorrect: IFAB did not permit turbans but an acceptable and appropriate head covering in its stead.