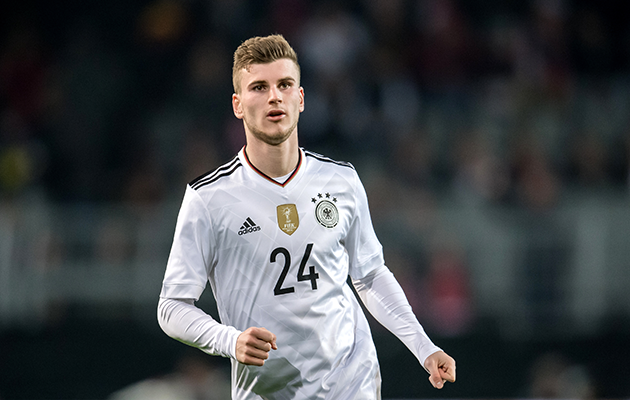 At the same time as Lukas Podolski was ending his glittering 13-year international career with a wonder goal winner against England in Dortmund, it’s ironic that these are far from the best of times for German marksmen in the Bundesliga.

While such overseas stars as Pierre-Emerick Aubameyang (Dortmund), Robert Lewandowski (Bayern Munich) and Anthony Modeste (Köln) reign supreme in the scoring charts this season, only two locally-sourced players (RB Leipzig’s Timo Werner and Sandro Wagner of Hoffenheim) have been on the score-sheet on a regular basis and even they require binoculars to see the Big Three goleadors in the distance.

Nor is the foreign domination of the Torschützenkönig race a new phenomenon. In the last 15 years, just five Germans have lifted the replica canon awarded to the leading hot-shot and of that elite band, only two (Miroslav Klose in 2005-06 and Mario Gomez in 2010-11 were/are genuine international performers.

Way back in the midsts of time, Germany used to be a land where prolific strikers were on every corner. Goal machines like Fritz Walter, Uwe Seeler, Gerd Müller, Jupp Heynckes, Klaus Fischer, Rudi Völler and Jürgen Klinsmann. But now the dinosaurs are extinct. No longer does the German game supply its own finishers. These days, the clubs have to prospect and buy abroad.

Inevitably, this spells trouble for Bundestrainer, Joachim Löw. With Miroslav Klose quitting the Nationalmannschaft in the wake of the World Cup triumph of 2014 and now Podolski following suit, the goalpoacher talent pool is shallow indeed, thus forcing Low to often use Mario Götze or Thomas Müller in the cfalse nine’ role. A position which does not especially suit either.

Low’s only other line-leading alternatives are to stick with Mario Gomez – who, to his credit, did a good job at Euro 2016 – or look to bed in the 21-year-old Werner as quickly as possible. The latter might not have particularly impressed in the England friendly, but as he has proved in the Bundesliga this term, is one for the future.

Ever since he dived for penalty in a game versus Schalke in December, Werner has been public enemy number one in many Bundesliga grounds. But undeniably could make a difference for Germany with his explosive speed and deep threat punch. As a tempo-changer and voracious worker, Löw could do far worse.

Two-goal Andre Schürrle was the surprise hero of Germany’s 4-1 World Cup qualifying win in Azerbaijan on Sunday. After swopping Wolfsburg for Dortmund last summer, the wide midfielder has had next to no good luck, unable to hold down a regular spot and netting just two goals in the Bundesliga. So would have been mightily relieved to bag a double on his first Nationalmannschaft start since October 2015.

Schürrle is not the only German international finding it tough to put the ball in the domestic league net. Incredibly, Thomas Müller is suffering from the same affliction at Bayern, with a mere two strikes to his name in 2016-17.

A period of hard labour for the homegrown.

What We Learned This Week
1. Laying down the Löw
Despite his side’s comfortable win in Azerbaijan and five wins out of five in World Cup qualifying Group C, Germany coach, Joachim Löw was not at all happy at the end of the game, unusually scathing in his assessment of his team’s performance.

“We did our duty in terms of the result, but we didn’t play in the way we like to,” he said afterwards. “There was too much carelessness in our game. We lacked consistency. We hadn’t played together for four months and the understanding wasn’t there. Today all that glitters was not gold.”

2. Maybe Meyer
More and more football reporters in the Ruhr are coming to the conclusion that Schalke are ready to sell German Under 21 midfielder, Max Meyer, to a club in England, possibly Tottenham.

With only a year left on his contract, Schalke are running out of time to cash in and in a further sign of bridges being burnt, Royal Blues coach, Markus Weinzierl recently criticised MM for not being effective enough in his ball-winning.

“Fifty-fifty,” replied Meyer at the weekend when asked about a new deal with the Gelsenkirchener.