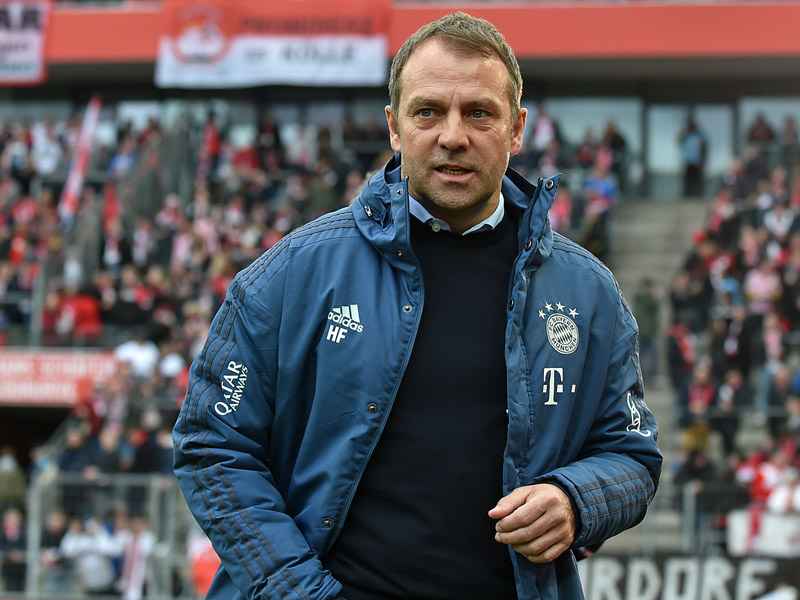 Bayern Munich’s decision to remove the word ‘interim’ from Hansi Flick’s job description – handing him a three-year contract as head coach – was an eminently logical step.

Flick, who began the season as Bayern’s new assistant-boss, has proved the perfect man for the job since taking over from the sacked Niko Kovac in November.

The modern day game is, above all else, a results business and in this sphere alone, Flick has passed with flying colours, delivering no fewer than 18 wins in 21 competitive games.

Crucially, the two defeats he did has suffered (consecutive wintertime losses in the Bundesliga to Leverkusen and Borussia Monchengladbach) did not sap morale in the camp at all. Indeed, those reverses turned out to be a turning point. His Bayern have been imperious from that moment on.

Flick’s legacy in a caretaker role is not just the stuff of wins. He has brought about improvements on more or less every level, restoring unity and purpose to the squad, winning hearts and minds with his fondness for attractive power football and solving a number of thorny personnel problems.

He deserves particular praise for the way he has reanimated the career of veteran attacking midfielder Thomas Muller. Not so long ago, the 30-year-old ex-German international appeared to have no future whatsoever at the club, bluntly categorised as a “fill-in” by Niko Kovac.

Under Flick, Muller is once again an automatic first-team pick, almost always deployed in his favourite role – that of the freewheeling number ten. And what a transformation has ensued, with Muller suddenly rediscovering peak performance: 10 goals and 19 assists in all competitions.

In the Bundesliga this season, he has provided the final pass in 16 of his side’s goals. No one else in the league can match such numbers. No wonder Bayern were so pleased to recently tie him to a new contract extension.

“Thomas Muller is a hero, a symbol of Bayern Munich,” declared club president Herbert Hainer. “He’s spent his entire career here and now is blossoming again under Hansi Flick. I would go as far as to say that Thomas Muller belongs to Bayern. Much like the Oktoberfest belongs to the city of Munich.”

1. Another spin of the revolving door.

Just a couple of months after Jurgen Klinsmann’s sensational resignation as Hertha Berlin coach, the ‘Old Lady’ continues to be a hive of instability. Rather than let caretaker boss Alexander Nouri hold the fort until the end of the season – whenever that may be – the Hertha powers-that-be have opted for more knee-jerk planning, giving a two-year contract to well-known troubleshooter Bruno Labbadia (ex-Leverkusen, Hamburg, Stuttgart and Wolfsburg).

In a chilling testimony, DFB (German federation) president Fritz Keller is suggesting that the Coronavirus shutdown could lead to pro clubs going to the wall. “We can’t rule it out,” he said. “The longer this situation goes on, we are more likely to have to have this unfortunate scenario play out.”  Keller added that the “cries for help” from clubs were “serious and believable”.