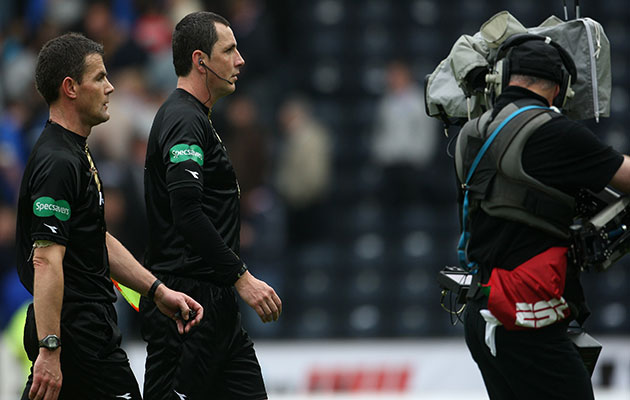 Experiments with video assistance for referees will start in the second half of 2017 though a suspicion lingers that football’s lawmakers have bounced themselves into action sooner than they should have preferred.

The devil is all in the detail and, for all the hyperbole led by new FIFA president Gianni Infantino, the International Football Association Board appears to have made little progress on the nitty-gritty since its business meeting in January.

The four British home FAs plus FIFA have yet to decide whether the experiments should be conducted with a ‘man in a van’ or at pitchside; whether the referee should liaise only via audio link or run to a screen; and how to deal with debatable incidents while play flows on.

A timeline for off-line testing and live testing has yet to be resolved or whether there is a preference for the appropriate competitions.

One additional proposal from England to offer coaches a restricted right of appeal on decisions was discussed and then set aside; such a complex issue should never even have reached the substantive debate of the annual meeting in Cardiff.

The challenge for IFAB, whose conservative caution has benefited the game down the years, has been to meet loudhailer public and media expectation without appearing blind to the needs of the elite televisual game in the 21st century.

To be fair, the FAs of England, Northern Ireland, Scotland and Wales – plus FIFA – had already bowed to that expectation with the full-hearted test approval recommendation issued in January.

In the circumstances the annual meeting may have managed not only the wisest but the only possible compromise in pushing back the start of testing by up to 18 months to buy time for their advisers to come up with coherent systems.

Infantino, eight days installed as president of the world federation on a high-profile platform of “bringing FIFA back to football rather than politics,” had every reason for wanting to be a cheerleader for a move which offers a revolution at the highest level of the game.

The 45-year-old Swiss, making his IFAB debut, said: “This has all my support and backing. Today we have taken really a historic decision for football. FIFA and IFAB – IFAB and FIFA – are now leading the debate and not stopping the debate.

“We have shown we are listening to the fans, to the players, to football, and we are applying common sense. Of course we have to be cautious but we are also open to take concrete measures to show that a new era has started not only in FIFA but in IFAB.”

Jonathan Ford, ceo of the FA of Wales, matched Infantino’s enthusiasm by hailing “one of IFAB’s most fundamental and historical meetings” and, clearly, the momentum is unstoppable.

Occasional notes of caution about scrapping video-assistance if the tests prove negative and that IFAB remains in control appeared mere words: the stable door is open and the horse has bolted with the board members clinging to its tail.

Ford did row back from his enthusiasm when it came to practical issues.

He said: “We want to be ready only when we are ready. We wanted to give ourselves the latest date [for a start]. We are not quite ready. It is a lot more complicated when you look at it. The likelihood is we will test off-line first – ‘hermetically sealed’ we call it – to make sure the protocols are right before we switch to live testing.

“Above all we don’t want to spoil the fluidity or beauty of the game.”

As announced in January, the four spheres of the game to which video-assstance will be directed are goals (including offside uncertainty), red and yellow cards, penalties and mistaken identity.

Video assistance is a thorny issue which has been kicking around ever since England’s disputed third goal in the 1966 World Cup Final. The Dutch federation took the initiative with a two-year test of its own and brought the issue to IFAB last year but a decision was delayed.