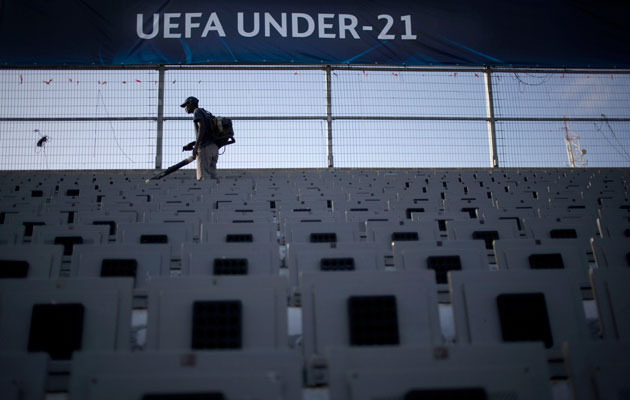 Time is running out if Israel is to avoid a demand for punishment – even possibly suspension – from world football at FIFA Congress next month.

Last year the world federation’s annual conference in Mauritius was warned by Palestinian football chief Jibril Rajoub that he wanted Israel sanctioned if progress were not made on the fraught issue of freedom of access of athletes through Israel.

He said: “Last year at congress I said that I hoped next year I could come with a solution but, if there were no solution, then I would come back for sanctions.

“This is what we are going to do although I am still optimistic that maybe something could happen before congress.”

Sanctions meant various possibilities up to and including suspension but Rajoub said he intended first to consult FIFA president Sepp Blatter, who has overseen the task force, as well as European federation leader Michel Platini.

He said: “According to my own experience as a Palestinian and also as president of the Palestinian association, the Israelis never agree to anything without being pressured.

“Platini [intervened] once before when the Israelis prevented Jordanian, Emirates and Iraqi teams from coming in. Immediately everything changed and all the teams were allowed to come in. He can do it again.”

The Palestinians have been angered over the past year by seeing Israel host the finals of the European under-21 championship, by the shooting of two Palestinian athletes and the recent arrest of a member of the national squad preparing for the Asian Cup.

Rajoub, who described Israel as “the bullies of the neighbourhood,” added: “The Israelis should not receive gifts for doing what they are doing.”

Israeli sports officials have insisted that, however they might wish for progress, key decisions were taken at higher political, security and military levels.

However the last straw for the Palestinians had been a letter which, according to Rajoub, had been sent by the Israeli sports authorities to Blatter.

He said: “The letter from the Israelis said they were ready to develop sport in Palestine but this should be done through their own channels – as if we were affiliated to Israel. It means they are not recognising the very existence of Palestinian sporting entity. This is the substance of the problem.”

He said: “The fact that the task force was put together was a very important step in Mauritius and, obviously, must report back. I just hope, by the time we go to congress, there will be something laid on the table to give us a better way forward.

“Palestine, as a federation, should be respected to carry on its duties without being undermined as if it were an affiliate of another federation. That is in the statutes of FIFA.

“As a country we in South Africa appreciate what Palestine is experiencing; we went through much the same ourselves for decades.

“But, in football, there is always injury time.”