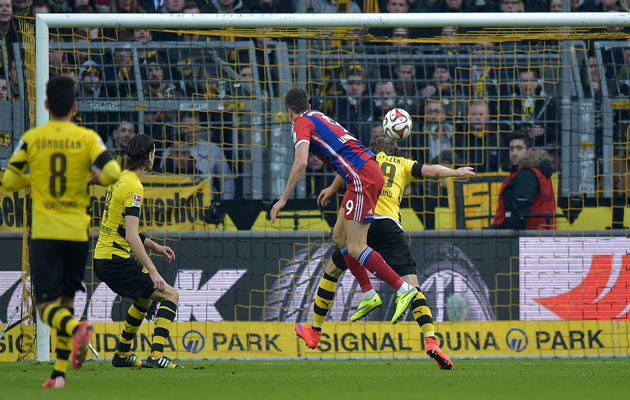 1. Stealthy Bayern Munich successfully go catenaccio in ‘Die Klassiker’.
For once preferring defensive entrenchment and long balls to their usual attacking intent and care in possession, Bayern’s cunning smash-and-grab 1-0 win at Dortmund on Saturday, might not have been the beautiful game at its most fluid or inventive but certainly was a tactical tour de force on the part of Pep Guardiola.

Concerned that injuries to Arjen Robben, Franck Ribery and David Alaba had deprived him of too many high-tempo options, Guardiola’s decision to pack his defence and sit deep effectively turned the game into a test of opportunism and resolve, a minimalist battle decided   nine minutes before the break when ‘Schwarz-Gelben’ old boy, Robert Lewandowski headed home from close range.

Interesting to note that Guardiola employed a golden oldie midfield three of Philipp Lahm – starting his first game after five months out with a broken ankle – Xabi Alonso and Bastian Schweinsteiger, an alignment Lahm described in a recent interview as “difficult to imagine”.

2. Energy drink money talks.
If anyone doubted the determination of RB Leipzig, Red Bull’s latest sporting dreamworks project, to build a Bundesliga empire in short order, the shock announcement of their 8 million euro swoop for Bremen’s brilliant young striker, Davie Selke, will have been the convincer.

The star of German’s victory at last year’s European Under 19 championships, Selke is only in his first full season in the Bremen first team and not so long ago, was waxing lyrical about his prospects at the Weserstadion. But nothing tempts more than a club with deep pockets beating a path to your door and as from August, the target man will be leading the line for the ‘Bullen’, who currently sit sixth in the second division, still nine points off a direct promotion spot.

Selke will have to stay strong. Such is the outrage on the Bremen terraces that the club has laid on a bodyguard for him.

3. Boom time at Borussia Mönchengladbach
Outstanding in their 4-1 win at Hoffenheim on Saturday and still looking good to qualify for their first European Cup/Champions League since 1977-78, Gladbach are not only flourishing on the pitch. Rhineland daily, Express, claim to have had a sneak preview of Borussia’s accounts for 2014 and confidently predict that at the club’s AGM on April 20, business manager Stephan Schippers will announce both record turnover (130 million euros) and profits (20 million).

Full marks to Schippers and ever-shrewd director of sport, Max Eberl. No past debts to service, personnel costs pretty much under control and so self-sufficient that they wouldn’t dream of selling the naming rights to their stadium.

4. Schalke: Euro Breakdown Dead Ahead?
After three consecutive Champions League campaigns – reaching the Round of 16 each time – the Royal Blues’ hopes of another bite of the ‘Königsklasse’ (King’s Class) cherry seem to be fading fast.

An insipid display in a goalless draw at Augsburg on Sunday left the Gelsenkirchener eight points adrift of the top-four and the harsh truth is that they not have enough punch up front, the shot-shy state of affairs exemplified by normally prolific Dutch striker, Klaas-Jan Huntelaar, who has not scored since netting a hat-trick against Mainz in November.

5. Christian Streich tries out for the Scrooge role.
You might have expected the Freiburg boss to be full of the joys of spring after his team eased their relegation worries with a 1-0 home victory against Köln at the weekend, only the second instance this season of the Black Forest outfit winning back-to-back games.

While club president, Fritz Keller, was busy celebrating a result “worth its weight in gold”, the poker-faced Streich spent the post-match press conference in condemned man mode gloomily picking apart his team’s performance and suggesting the best team lost. ” What this game showed was just how far we still have to go, ” sighed Streich.

Not that the Kölner were any happier, beaten 1-0 in each of their three encounters with Freiburg this term (twice in the league and once in the DFB Cup).