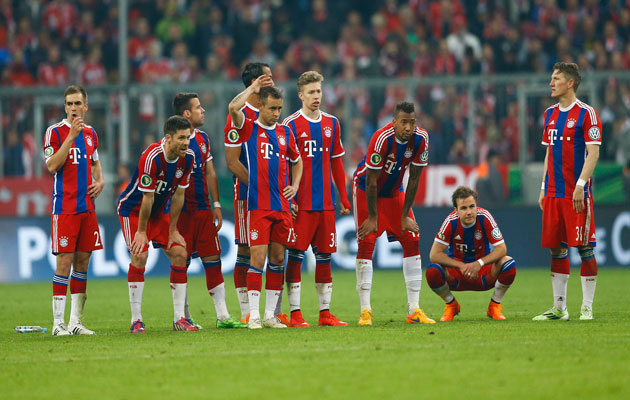 1. No Triple for Bayern. A chink in the mental armour?
Dumped out of the German Cup at the semi-final stage after missing all four of their penalties in a shambolic shoot-out loss to arch-rivals Dortmund, Bayern Munich do not often become objects of ridicule, but they were seriously embarrassed last week at the Allianz-Arena.

The sight of Philipp Lahm and Xabi Alonso slipping over in their run-ups and firing high and wide had something of a circus Big Top about it. For a team which usually inspires fear and trepidation, the slapstick theme is not what they want to promote. Unable to translate their regulation time dominance over the Dortmunder into victory, Pep Guardiola’s men visibly wilted under the pressure of the 11-metre test of nerve.

The memory of this wipeout – the first time in the club’s history that they had drawn a complete blank in such an exercise exercise – will not easily be erased. 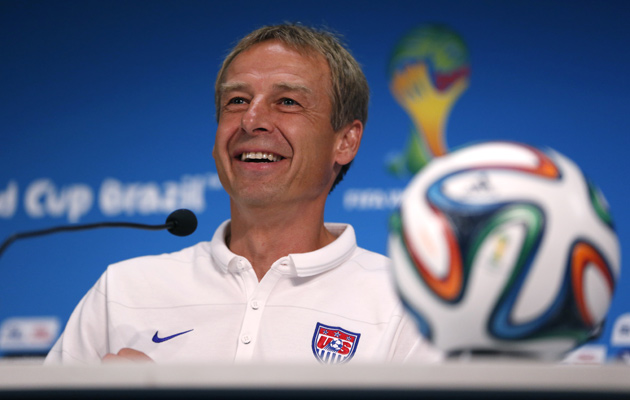 The report in Kicker magazine that USA head coach, Jurgen Klinsmann, is on Eintracht Frankfurt’s short-list to replace long-serving executive chairman, Heribert Bruchhagen would have left many perplexed.

For all the former Bundestrainer’s love of a ‘project’, over-arching powers and pick-and-mix delegation, his last stint in German football as boss of Bayern Munich was a thoroughly dispiriting experience – he lasted nine conflict-laced months in 2008-09. With three years left on his contract with the USSF, why would he quit high-end international football for a mid-table Bundesliga team of limited horizons?

3. Forty years since their last Bundesliga demotion, rock bottom Stuttgart steel themselves for another spell in exile.

No wonder Stuttgart boss Huub Stevens spoke dolefully of seeking refuge in a monastery at the end of his side’s 3-2 defeat at Schalke, the club he famously steered to UEFA Cup glory back in 1997.

Despite the Dutch coach’s best efforts, the Swabians from Mercedes Benz City continue to perform with the unreliability of a rusty old Trabant. Unless Stevens can do a loaves-and-fishes act in the three games remaining, he will taste relegation for the first time in 22 seasons of pro leadership.

If only the Stuttgarter could keep up the good work for the entire 90 minutes. Time and time again this season, they have combined bravery and enterprise with moments of sheer ineptitude and were at it again on Saturday, leading 2-1 at the 11th hour before conceding two late goals.

4. Mainz: A club with a heart.
All credit to Mainz general manager Christian Heidel for his remarkably sympathetic reaction after veteran midfielder Elkin Soto was carried off with a horrific knee injury (dislocating it and tearing three separate ligaments) during the 2-1 home loss to a rejuvenated Hamburg.

On the club’s books for the past eight seasons, the 34-year-old Soto was due to leave Mainz on a Bosman free this summer for a swansong in his native Colombia. But within minutes of the chilling diagnosis, had been offered a 12-month contract extension by Heidel.

“I’ve been in this business for a long while and have never seen a knee in such a state,” declared Heidel. “If Elkin wants, we’ll straight away extend for further year.”

Who said today’s game had no soul ?

5. Wolfsburg prepare the ground for next season.
Keen to beef up their squad in readiness for the extra demands of the Champions League, Wolfsburg already seem to have done the hard yards to bring in Gladbach’s German international striker Max Kruse.

The 27-year-old left-footer already has undergone a medical with the VW outfit and though under contract with his current club until 2017, should be able to activate a 12 million euro release clause in the off-season.