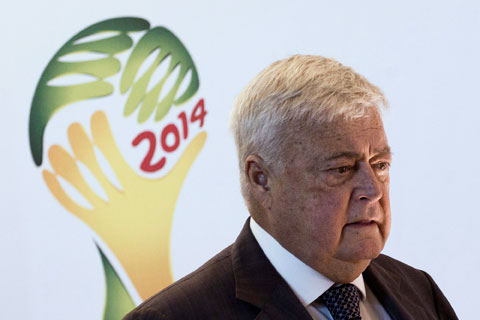 Ricardo Teixeira, once the most powerful man in Brazilian football, now lives in exile.

Some 25 years ago this week – on January 16, 1989, to be exact – the now-notorious Ricardo Teixeira became president of the CBF, the Brazilian football confederation.

Even though he now lives in self-imposed exile in Miami, the extent of Teixeira’s power is still influencing the course of events in the run-up to the World Cup finals in Brazil in June and July.

Also, the dark clouds of his connection still float across the horizons of what should otherwise be the clear blue skies of his CBF successors and even such a disparate personalities as Barcelona president Sandro Rosell and FIFA secretary-general Jerome Valcke.

Almost everything he touched turned to gold for someone – albeit mostly for himself and his family – but much of it, in the end, has proved tarnished.

On January 16, 1989, the then 41-year-old financier was elected CBF president by acclamation at the headquarters of the Superior Court of Sports Justice. Between then and his scandal-enshrouded retreat some 23 years and 56 days later, on March 12, 2012, Teixeira was re-elected five times.

No-one ever dared challenge him. Even politicians and policemen who raised the occasion parliamentary and judicial eyebrows at his methods were put in their place. One such pursuer was Aldo Rebelo. Later, somehow, Rebelo became a friend of Teixeira: now he is Sports Minister.

Teixeira was the protégé of his then father-in-law Joao Havelange who, in 1989, had been all-powerful president of world federation FIFA for 15 years after himself having led the Brazilian sports confederation.

Octavio Pinto Guimaraes was the incumbent CBF president. He had been elected in 1986 and fully intended to continue. But on the eve of the vote he was told that a majority of at least 26 state federations would vote for Havelange’s son-in-law. Guimaraes withdrew to a sinecure position which amounted to honorary president.

Winning power is one thing, winning enough football matches to keep the country happy is something else.

Teixeira began well. He brought back Sebastiao Lazaroni as national coach from Saudi Arabia and, within six months, was rewarded with a 1-0 victory over Uruguay in the Maracana to bring home the Copa America after 40 bleak years.

Domestically Teixeira handed the clubs an extra source of revenue through the creation of the Copa do Brasil and his power of patronage secured stage-managed re-elections in 1991, 1995, 1999, 2003 and 2007. In 1995 and 2003 Teixeira rode higher than ever on the back of World Cup victories the previous year.

Inbetween he was elected on to the FIFA executive committee with the nakedly obvious ambition of succeeding, one day, to the presidential throne in the image of Havelange.

Teixeira’s power at home was absolute. Threatened by yet another parliamentary inquiry into his and the CBF’s murky finances, he stepped clear thanks to a new election-pact friendship across the sports/politics divide with President Lula . . . who threw his support behind Brazil’s bid to host the 2014 World Cup.

The CBF’s finances had been strengthened by the long-running Nike sponsorship which owed much to the company’s regional senior executive, one Sandro Rosell. Similarly, the World Cup host bid was prepared for Teixeira by Jerome Valcke while on ‘gardening leave’ from FIFA in the spring of 2007.

But, even as Teixeira signed and sealed the World Cup contract, so the sands of FIFA time were running out. Already it was common gossip that he and Havelange had creamed off millions of dollars in illicit payments from former FIFA marketing partner ISL.

Havelange and Teixeira could not hold back the tides of time. Coincidentally, FIFA’s votes-for-cash scandals in 2010 and 2011 generated a tide for transparency which, along the way, also blew open the ISL cover-up.

Teixeira was reported to have had secret bank accounts in Liechtenstein and Andorra. His ability to progress the football side of the World Cup preparations was undermined, his increasingly rare press conferences peppered with questions about his business affairs.

On March 12 this year, in Miami, Havelange can celebrate another anniversary — the second anniversary of his moonlight flit to Florida.