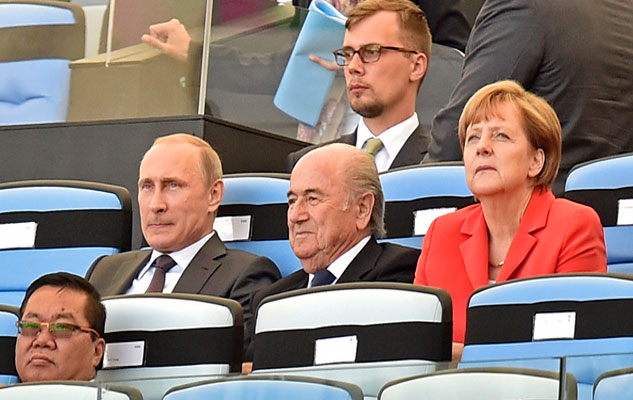 A handful of German politicians have been joined over the weekend by Britain’s Deputy Prime Minister, Nick Clegg, in a coalition whose ambition is to see Russia stripped of hosting the 2018 World Cup finals.

Apart from the sports/politics or politics-in-sport arguments, anyone with any sense of perspective must have concluded over the last couple of decades that some people out there (including a number of journalists) just do not want the World Cup to take place, full stop.

Indeed, tracking back through the tournament’s history, cogent reasons exist why all the host nations were the wrong choice for the wrong reasons at the wrong time. Or “unthinkable” to use the word of choice of the Liberal Democrats’ leader.

1930, Uruguay: A tiny nation, down at the wrong end of the world, far distant (in the pre-jetliner age) from the European cradle of the game. Also, they bribed the FIFA executive committee by offering to pay everyone’s travel and accommodation costs. Unthinkable.

1934, Italy: A nation constructed on a foundation of belligerently offensive dogma under a dictatorial leader who wanted to use the finals for international PR. Unthinkable.

1938, France: Playing host when world war was not only just around the corner but was being actively rehearsed right next door in Spain. Unthinkable.

1950, Brazil: The world had far greater demands on its money in the tough years after a world war; also, the finals had to be put back from the original 1949 date because Brazil was not ready in time. Unthinkable.

1954, Switzerland: Its notoriously secretive bankers played money-laundering games for the Nazis during a war which was not even a decade past. Unthinkable.

1958, Sweden: Hosted finals whose temperatures and general climatic conditions were always and obviously going to be a major problem for southern hemisphere nations. Unthinkable.

1966, England: Founding country of the modern game but on the apparent verge of financial collapse. Unthinkable.

1970, Mexico: Up to 300 students had been shot dead in riots just before the Olympic Games in the capital two years earlier. Ridiculously insecure venue. Unthinkable.

1974, West Germany: Host just two years after the worst-ever terrorist atrocity, in Munich, at any sports event. Proven as not up to the security job. Unthinkable.

1978, Argentina: In the middle of a CIA-backed ‘dirty war’ in which suspected critics were tortured to death down the road from the main stadium and others were dropped out of aircraft over the Atlantic. Unthinkable.

1982, Spain: Probably the most incompetently organized finals of them all in a wasteful and nonsensically over-budget 17 stadia in 14 cities. Unthinkable.

1986, Mexico: Another country ravaged by an earthquake in the run-up to the finals. As with Chile in 1962, plainly unsafe. Unthinkable.

1990, Italy: Communist Europe in foment after the collapse of the Berlin War the previous November with unpredictable instability right across continental Europe. Unthinkable.

1994, United States: The nation which kicked off the tit-for-tat Olympic sports boycotts of 1980 and 1984. Didn’t deserve the chance. Unthinkable.

1998, France: Nation’s sporting credibility demolished by the ongoing doping scandals and cover-up in and around the Tour de France. Unthinkable.

2006, Germany: Voting scandal – it won hosting rights only after FIFA exco member Charlie Dempsey was intimidated into flying home to New Zealand before he could cast his vote. Unthinkable.

2010, South Africa: FIFA vote-bending system of ‘rotation’ was finagled into place to ‘fix it’ for South Africa. Unthinkable.

2014, Brazil: Country in torment with millions of protesters on the streets, preparations workers either on strike or on a go-slow. Only landed the finals by mistake off the back of the South African manoeuvre. Unthinkable.

As mentioned, if some people had had their way the World Cup would never have taken place anywhere, any place, any time.

Then what would we all have missed? Would opponents and critics down the years have cared . . . or would they, long since, have moved off in pursuit of their next easy headline?