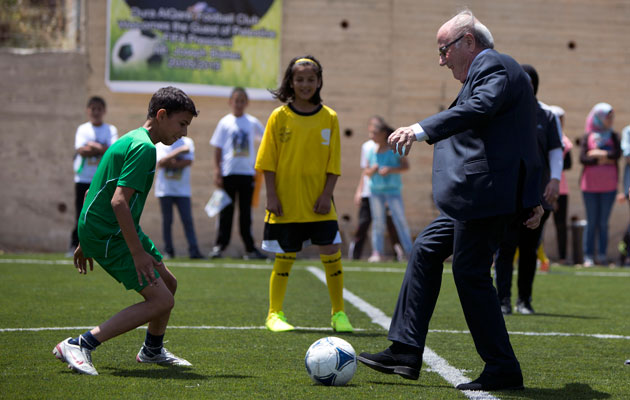 Sepp Blatter’s confidence in his peace mission to the Middle East appears to have been badly misplaced after his proposals were rejected, very publicly, by Palestine’s sports chief.

Earlier this year Jibril Rajoub, president of both the local football federation and Olympic committee, registered a demand that FIFA Congress, next Thursday, suspend Israel from the world football federation in the long-running freedom of access dispute.

Blatter has engaged in ever-more-frenetic shuttle diplomacy in an attempt to placate the Palestinians and avert a row which would cloud what he envisaged as a congress climaxing with his triumphant re-election as president.

On Tuesday Blatter met Israeli football leaders as well as Prime Minister Binyamin Netanyahu and took what he considered as a positive shift in attitudes to Palestine yesterday.

One of the ideas was for a ‘peace match’ between the national teams of the two states.

Blatter found both Rajoub and Palestine Prime Minister Mahmoud Abbas in intransigent mood, impatient at what they consider the immovable attitude of the Israeli government and security services and no longer prepared to step back from confrontation – as they were in 2013 and again last year.

Rajoub, at a press conference after talks with Blatter, said: “We will keep the proposal on the congress agenda (of the upcoming FIFA Congress) for sincere and open discussions by the other 208 FIFA member associations.

“There will be no compromising on free movement of our athletes and officials.”

Rajoub gave a diplomatic welcome to Blatter’s “great idea” of a peace match but indicated that conditions would not be appropriate without movement on the substantive issues.

Blatter, over recent months, has stepped up his rhetoric against mixing politics with sport – an approach which was endorsed by Netanyahu on Tuesday.

Seeking to put the best possible gloss on his visits to Israel and Palestine, Blatter insisted he had not yet given up on finding a further compromise ahead of congress.

He said: “I had constructive meetings with the Palestine political and football authorities. We all agree football should unite not divide. I came on a mission for peace – football should foster peace and leave politics aside.

“Based on my talks over the last two days, I remain confident, despite the challenging situation, that we should be able to find a solution in the interests of football and all parties involved ahead of the congress.

“We will work together with the Israeli authorities on concrete solutions that should aim at the creation of a special football ID and a tax exemption on football donations for the benefit of football development in the region.

“We’ll promote a regular exchange between the Israeli and Palestinian authorities through a working group with the participation of FIFA that should meet on a monthly basis. As FIFA president, I do not see that a suspension of an association is a solution.”

Blatter, accompanied by FIFA secretary-general Jerome Valcke, unveiled a FIFA Goal project in the village of Dora Al-Karee and visited the football club of the refugee camp Al-Jalazon, as well as holding a separate meeting with players of Palestine’s national team.