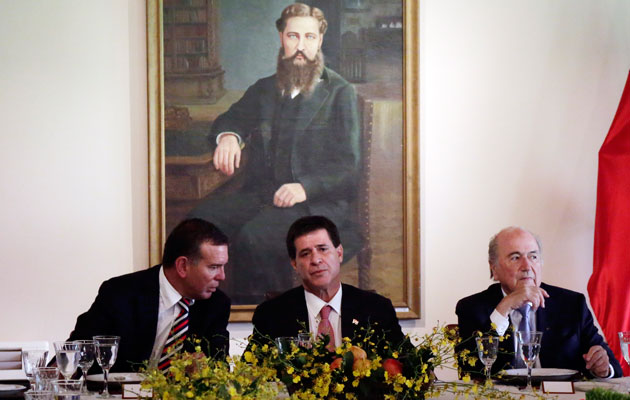 A wind of change is blowing through the corridors of powers in South American football; Sepp Blatter would have felt the uncertain breeze at CONMEBOL congress in Asuncion, Paraguay, last week.

Time was when Blatter never had to trouble himself. Argentina’s long-serving Julio Grondona, Brazil’s self-serving Ricardo Teixeira and Paraguay’s time-serving Nicolas Leoz were at his beck and call in the FIFA exco as well as ‘their’ 10-strong block vote in congress.

Now, the unholy trinity have all gone, in the space of three years. Scandal-enshrouded Teixeira fled Brazil and football in March 2012, Leoz quit the CONMEBOL presidency in 2013 to escape investigation at home and abroad while Grondona died last July.

Key members of the support cast have been swept away, too. Argentina’s Eduardo Deluca – Grondona’s ‘insider’ – quit as CONMEBOL secretary-general on health grounds in 2011 and now Uruguayan Eugenio Figueredo has been ousted as its FIFA vice-president.

New CONMEBOL president Juan Angel Napout has his critics back in Paraguay but he has an agenda which is very different to the old guard. His success depends on building alliances – most obviously with CONCACAF – if South America is to carry any weight at all at the top table of the world game.

CONMEBOL congress was described by one old-stager as “one of the most intriguing – and intrigued – for many, many years.”

The manoeuvring went back to 2013 when Leoz, after his fourth major heart operation, accepted the ‘advice’ of his colleagues to step down. Figueredo, supporter turned persuader, duly took over both as interim president and as CONMEBOL’s new delegate (along with Grondona and Brazilian Marco Polo Del Nero) on the FIFA exco.

Figueredo believed himself set for a long reign, at least within FIFA. But he had reckoned without Napout’s campaigning energy in a pincer movement plotted with Figueredo’s old rival (and UAF president) Wilmar Valdez.

Hence, when it came to last week’s election – under the nose of Blatter and FIFA challengers Michael Van Praag, Prince Ali and Luis Figo plus UEFA president Michel Plaitni – Napout was confirmed not only as CONMEBOL president but as South America’s FIFA vice-president.

Worse was to come for Figueredo with the confirmation that he was out altogether as Del Nero and Bedoya had maintained their places on the FIFA exco. Bedoya has been president of the Colombian federation since 2006 and is the third Colombian on the FIFA exco after Alfonso Senior (1970-86) and Leon Londono Tamayo (1986-94).

Figueredo was not even granted the consolation of a senior role within CONMEBOL. First vice-president was the Venezuelan VP Rafael Esquivel with Sergio Jadue, head of the Chilean federation, as second VP. Third VP, to some surprise even back in Montevideo, was the ‘other’ Uruguayan, Valdez.

Napout is a 57-year-old businessman who speaks English, French and Portuguese, is a former president of Cerro Porteno and has taken lead roles within Paraguayan football ever since his mid-20s. In 1998 he led Paraguay’s delegation at the World Cup in France and ultimately graduated to federation president in 2007.

The upheaval he has just overseen at CONMEBOL is responsible for the refusal to confirm support, formally, for Blatter in the FIFA presidential election. Van Praag claimed he had been assured of two CONMEBOL votes but that remains to be seen. Napout and his colleagues will not make up their collective mind until May.

Probably more important for Napout will be preparing for the Copa America in Chile in June and July then the Centenary Copa in 2016 which is being staged, bizarrely and illogically, in the United States.

Next will arise the vexed question as to whether one or more South American nations dare bid for the centenary World Cup in 2030. Now that the hosting decision rests with full FIFA Congress, the new strategy of alliance-building has become more crucial than ever.