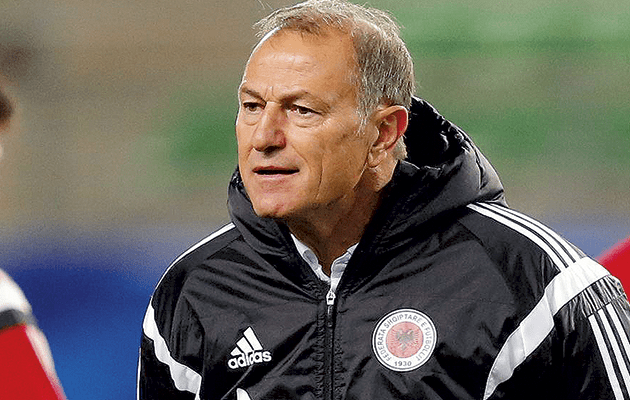 World Soccer: It’s been almost five years since you took on the role of Albania coach. Now you’re in the Euros and you’re a hero. Did you ever expect this?
Gianni De Biasi: I hoped so, but it’s not normal that a little country like Albania is going to the finals of a European Championship. When I came here I met a very old group of players and it was necessary to make many changes. This was a very problematic situation.

In the first two years, I experimented with many players. I had many trips to meet the players and to understand what they thought about the national team. It was really tough work. There are only two players who started my first friendly who are playing for me now.

My assistant coach is very important because we did, perhaps, 50 trips, and I did about 21-22 of them. He speaks very good English and, for this reason, it’s better he meets with the players. I speak Italian-style English. It’s not good enough!

When you arrived, no one expected much. Now everyone is talking about exciting young players, improving the domestic league, getting through your group in France. How do you manage such expectations?
It’s important to change the mentality of the people – the journalists, the players – because it’s just ask, ask, ask. They want to ride to the moon on a bicycle! This is the big problem.

For me, this situation is normal; it’s the same as club football. When I was with Torino in Serie B they were going through a financial crisis. At the start of the season the president was saying to me: “Middle of the table is fine this year.” When we were doing well, he was like: “We must do better or we’ll die.” This is the mentality of football.

When you’re at lunch, the more you eat the more you want to taste something good. Today, Albanian people expect that we’ll qualify from the group, maybe get to the Final.

What will be success for you in France?
Success is realising something unexpected – like what happened in qualifying. Doing it again would be difficult, to say the least!

These days people cheer your name on the streets of Tirana. What’s that like?
Oh, that’s just football. It’s the same in Italy, the same in the US. When something unexpected happens, it gives a great enthusiasm and happiness. The problem is managing it, because if you set the target too high there is a huge problem for everyone because it’s an illusion.

Is there a wider goal in terms of developing grass-roots football here?
We have a good base group of players that are doing well, and young players that are waiting on the fringes and progressing at their clubs. Our main problem is we have a terrible World Cup qualifying group, with Spain, Italy, Israel and Macedonia [and Liechtenstein], and only one guaranteed to go through.

We have one stadium capable of staging international club matches. The level of the local league has not increased and there are not enough academies for young players. It’s a poor country. A few people have lots of money, but most people have no money. It’s not good.

It would have been unthinkable a few years ago that an Albanian player such as Rey Manaj, who is 19 and playing for Internazionale in Serie A, wouldn’t be a regular for the national side. Isn’t that progress?
Manaj particularly is very young and has rarely played in the Inter first team. For me he’s a very good player, but his mind is not in the right place.

How does it feel to have coached in your homeland for so many years, only for Albania to become the biggest highlight of your career?
Well, I’ve done some important things in Italy too. It was pretty difficult to bring Torino from the third tier to Serie A, let me tell you! But that’s just big in Italy.

If you bring a team like Albania to the European Championship, the whole world pays attention – it’s a phenomenon. It’s an historic moment for Albanian football, for the Albanian people and for the politics here. If I put my candidacy for prime minister in tomorrow, I could win without advertising.

So what does a coach who has achieved such unlikely success do next?
I really don’t know. That is very difficult for me to answer.