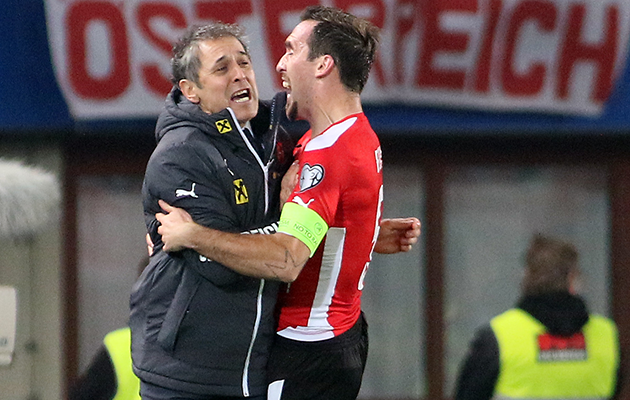 World Soccer: You finished top of your qualifying group, eight points clear of Russia. That was some achievement…
Christian Fuchs: When you look at the group, both Russia and Sweden were favourites ahead of us, given both their past history and more recent form in qualifying for the major tournaments, so it was a fantastic achievement. We came into the competition with good momentum though, from our World Cup qualifying campaign, and beating Russia both home and away proved crucial in the end. The away game, in particular, was important to our overall position; a defeat and they’d have got much closer to us in the group, but a win took us one step nearer qualification. Russia is never an easy place, for any team, so to beat them 1-0 was an excellent result – as was winning 4-1 in Sweden to secure our qualification. To win nine of our 10 games and draw the other was outstanding.

What style of play does coach Marcel Koller adopt?
We are a side that like to press high up the pitch, with pace on the wings and in attack, but we are solid in defence and throughout the team. But I think it would be wrong to say that we are simply a counter-attacking side. We also have players who like to keep possession, so it’s a good mix.

Your first game is against old foes Hungary. Is there still “needle” between the countries?
Yes, it’s still there given the history that exists between the countries, and it’s a game that stands out in the group. It’s going to be something special walking out for that first game – and playing Hungary provides extra excitement for the fans. As players, we have to focus on the game though, not the occasion, and make sure we are fully prepared. We will be giving everything to win though, that’s one thing that I can predict.

Is there extra pressure on you as captain of your country?
I don’t see it as a pressure; I see it as an honour to captain my country – whether it’s a friendly, a qualifier or in a big tournament. I have been playing for my country for 10 years now, and it’s not always been a good path we have followed, but I feel very connected to the national team having had the armband since 2011.