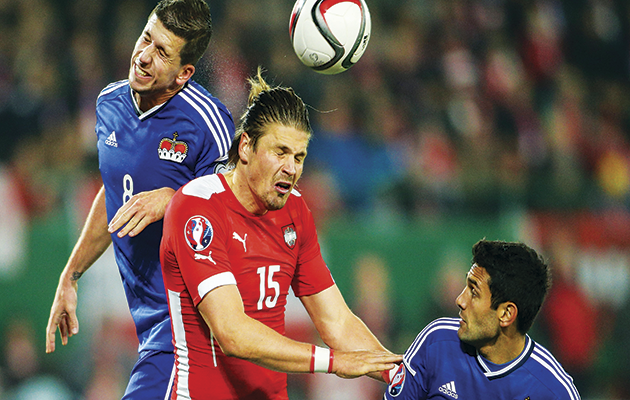 It’s been a dismal couple of decades for Austrian football. Since the 1998 World Cup they have made only one appearance at a tournament finals – when co-hosting Euro 2008 – and even then they went out in the group stage.

At club level, Austria has been conspicuous by its absence from the Champions League, while Red Bull’s takeover of the former Austria Salzburg club has alienated supporters at one of the country’s most traditional sides and distorted the league.

Austria’s only hope of qualifying for the Euros seemed to be if the number of finalists was increased, so when UEFA announced that 24 teams would go to France rather than 16, the fans began to hope. Yet as it turned out, Austria would have qualified comfortably even if the limit of 16 had been maintained.

Under coach Marcel Koller they stormed through the qualifiers, beating Russia 1-0 home and away, and clinching their place with a 4-1 win away to Sweden.

The transformation did not, however, come overnight.

The Austrian federation laid the foundations back in 2009 with the “Project 12” programme, which offered special training for the country’s most promising players aged 15 to 21. Nine members of the current senior squad are products of that programme, including David Alaba and Aleksandar Dragovic.

Austria have also begun to emulate Switzerland by tapping into the potential offered by the country’s community of second-generation immigrants.

Koller’s predecessor Didi Constantini also played his part. Although criticised after falling out with several top players, he did help the process along by giving younger players a chance in the team.

However, it has all clicked into place after Koller took over following Austria’s failure to qualify for Euro 2012.

The Swiss coach was initially a less than popular choice, having been out of the game for two years and sacked from his previous job, at German club Bochum. But he proved to be the right man to carry on the job and has lifted Austria from 70th in the FIFA world rankings into the top 10 during his five years in charge.

Koller has proved himself a master at team-building and getting the best out of his players, in particular Marko Arnautovic, whose career was in danger of going off the rails after a series of tantrums and off-the-field incidents.

“There’s nobody in the team who has got a bad thing to say about him,” says Arnautovic. “He always places his trust in me and I hope I can pay it back.”

Koller has kept his team remarkably stable, fielding an unchanged line-up in the final six qualifiers and declining to experiment even in friendlies.

With most of the first XI based in the German Bundesliga or the Premier League, there is plenty of top-level experience and certainly enough to get the side into the last 16. But there are worries about a lack of practice against the big guns of international football.

Since facing Germany, and losing twice to them in the 2014 World Cup qualifiers, Austria have played only two such games: drawing 1-1 with Uruguay and performing credibly but losing 2-1 to Brazil.
With Austria not having gone beyond the group stage at a tournament since the 1982 World Cup, this would seem an ideal chance to create a new, positive impression of Austrian football. 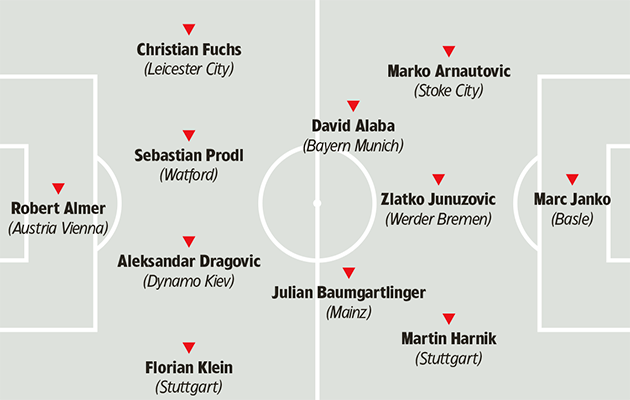 Koller’s 4-2-3-1 formation has four basic tenets: a very high pressing game; rigid tactical discipline; slick, combination play; and twin-strategists in number ten Zlatko Junuzovic and David Alaba, who while nominally in a midfield holding role, has a lot of scope for creative enterprise.

With Alaba unleashed, Austria effectively switch to a 4-1-4-1 and if they are chasing the game, Alaba definitely will be pushed much further forward. In many ways, the key midfield figure is Julian Baumgartlinger, the man to do the donkey work.

In defensive mode, Austria invariably line up in a 4-5-1 or 6-3-1, with the focus on having as many men behind the ball as possible. If opting for a solid, robust approach in central defence, Koller usually will go with Aleksandar Dragovic and Sebastian Prodl. However, Martin Hinteregger is better on the ball and tends to replace Prodl when Koller is less fearful of the opposition. Koller’s core philosophy is that games are won at the back and he does not particularly enjoy rolling the dice.

On the front foot, the Austrians usually slip into an attacking trident: centre-forward Marc Janko flanked by the busy Martin Harnik and maverick Marco Arnautovic, with either Alaba or Zlatko Junuzovic taking turns to lend support. Junuzovic is the set-piece specialist, a key area in the Koller scheme of things. 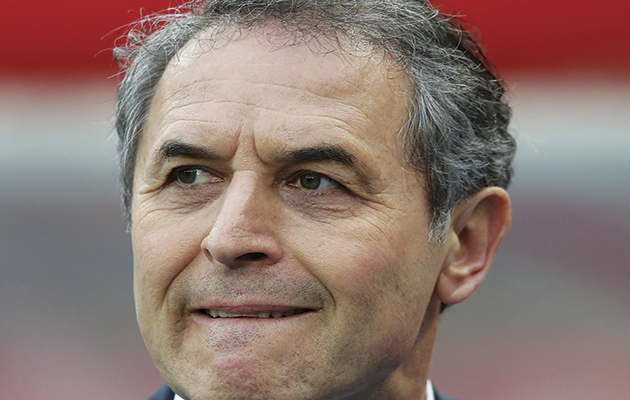 Appointed in 2011 after a two-year sabbatical spent studying German football and has brought a high-tempo game – such as that favoured by the likes of Jurgen Klopp – to the Austrian side.

A midfielder as a player, he was capped 55 times by Switzerland and played under Roy Hodgson at Euro 96.

He coached in his homeland before leading Cologne and Bochum in Germany.The Austrian Football Association extended his contract until 2017 in March.