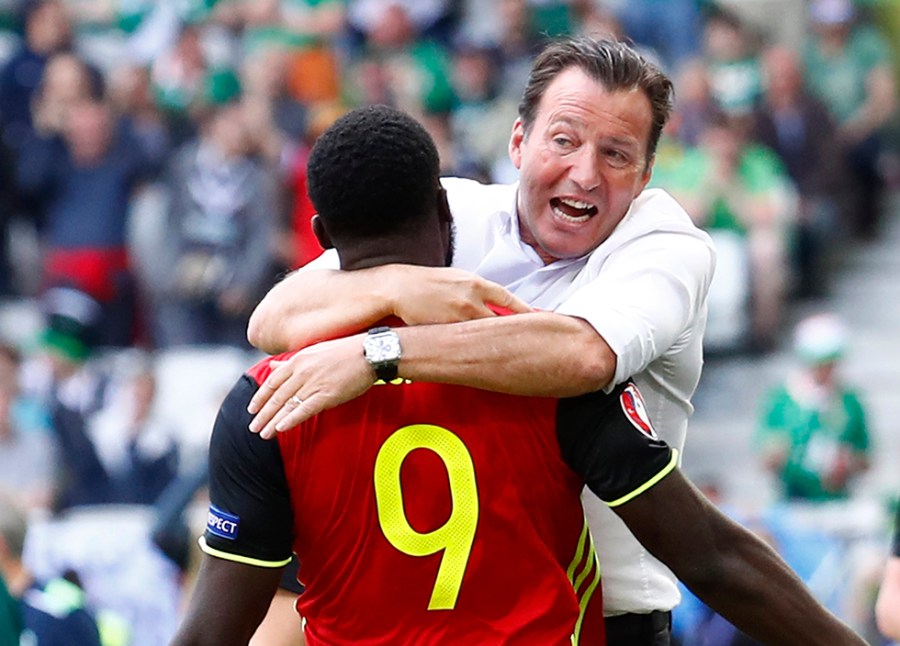 The Italians have a saying for it.   It is called taking an annoying stone out of your shoe.   What the Italians do not add is that you then throw that stone at the people who have been annoying you.

That is more or less what Belgium coach March Wilmots did on Saturday afternoon immediately after his team had completely outplayed Ireland in an emphatic 3-0 victory in Bordeaux.   One of the obvious pre-tournament favourites, the Belgians had run into a brick wall in the shape of Italy in their opening 2-0 defeat by Italy in Lyon.

That had inevitably opened the flood gates of domestic criticism, some of it not necessarily tender.   Wilmots got his retaliation in on Saturday when asked about the changes he had made for this game:

“Our line-up surprised but it was the right line-up…We were not going to play defensively against Ireland or you would be sacking me all over again – don’t worry I am used to that. After four years of success when we get criticism it is like those last four years disappear, manipulating people, giving people the wrong idea.

“I live with criticism.  Apart from death I don’t know what would affect me.  I am 47 years old.  I want to be healthy and to put the kids on the right path.  I only want positive people.  People who criticise are never going to have a good life.”

In other words, Belgian media (and others) take that.   Going into this game, the Irish media were enthusiastically reporting on possible “meltdown” in the Belgian camp.   Chelsea goalkeeper Thibaut Courtois was reported to have had a row with Wilmots on the plane back to the training camp after the defeat by Italy, suggesting to his coach that Italy had outplayed Belgium in terms of tactics, organisation and selection.  Likewise Atletico Madrid attacking midfielder Yannick Carrasco had allegedly grumbled about being dropped for the Italy game.

In the end, Wilmots made three changes from the Italy game, bringing in Carrasco, defender Thomas Meunier and Spurs man Mousa Dembélé instead of Laurent Ciman, Marouane Fellaini and Radja Nainggolan.   Wilmots can now argue that those changes played a key role in the improved Belgian performance.

He could have a point but many of us would argue that the biggest reason his side were able to turn it on was not because of any tactical or organisational brilliance on his part but rather because last time he was playing a useful-looking Italy.   The fact  that the Belgium squad comprises players from Chelsea,  Spurs, Barcelona, AS Roma, Atletico Madrid and Zenit St. Petersburg players Irish coach Martin O’Neill, picks his men from the ranks of Norwich, Aston Villa, Sunderland, Burnley et al must mean something.

Never mind, though, Wilmots will take the badly needed victory, glad to have got the highest-ranked side in this tournament (No. 2 in the world) back on the rails.   Ireland should not feel bad about this defeat since it came against a side which may yet have a significant role in these championships.

Before that, though, Wilmots and his men need to beat Sweden to be sure of going through to the second round.   He knows this better than anyone, saying on Saturday:

“We’re not qualified yet, we have a very difficult game against Sweden coming up, that is another Cup final for us…They are a good team, they drew with Ireland and were only beaten by a very late goal from Italy”

Asked about his warm embrace of Saturday’s goalscorer, Everton’s Romelu Lukaku, immediately after the first of his two goals against Ireland, Wilmots admitted frankly that this was a gesture of “unity”.   Lukaku, the team and indeed Wilmots himself badly needed that goal.   Once that psychological block was removed, to some extent the flood gates opened on poor Ireland:

“Yeah, unity is so important…We win together and we loose together…”

Indeed, who knows, with all that togetherness, Belgium might be about to get their show truly on the road…Roll on Sweden v Belgium in Nice next Wednesday.