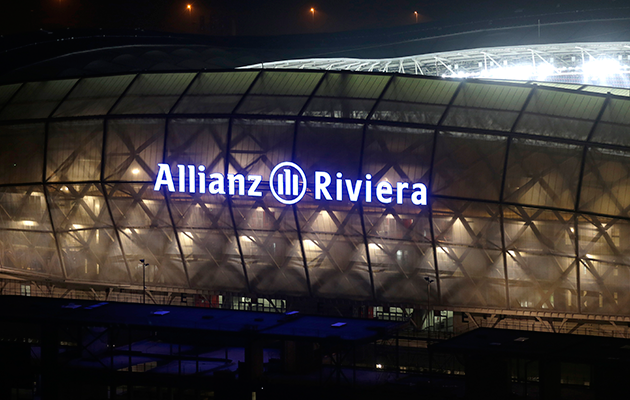 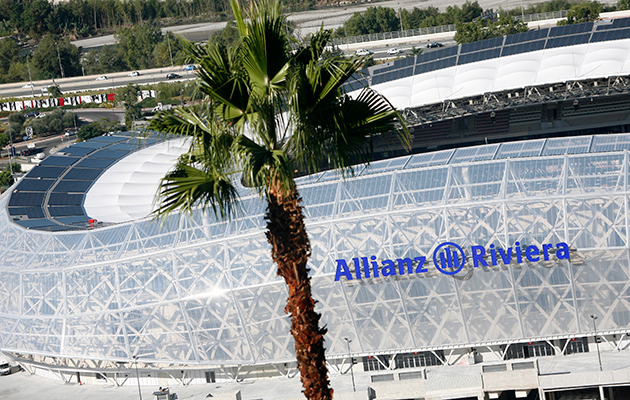 Host of the Euro 2016 qualifying draw and home to a new football stadium built to stage the competition itself, Nice is set on re-establishing itself at the forefront of the French game. Ignored for the 1938 and 1998 World Cups in favour of Antibes and Montpellier, Nice also hosted a rare international in 2014, France playing Paraguay.

Flagship club OGC Nice achieved a strong league finish in 2013, six decades after a string of championship wins and subsequent mediocrity. True, the fourth place under Claude Puel was followed by mid-table one in 2014 and a weak showing in the Europa League – but this was the Eaglets’ first European campaign for 15 years. A heroic extra-time defeat that February to moneyed Monaco by a ten-man OGCN in the French Cup only served to bolster considerable local pride. As the scarves say in Nice bars, ‘Allez Nissa La Bella’ – ‘Go Beautiful Nice’.

Though the club vacated their century-old, city-centre Stade du Ray in 2013, in cafés around it, the football pages of ‘Nice-Matin’ are still devoured and discussed from opening time onwards. Unlike the rest of the rugby-blighted south, Nice has always been firmly football-focused.

Though the modern French game first developed in Paris and the Channel coast, the south of France was also an early pioneer and has traditionally produced some of her most notable players. Zinedine Zidane, Patrick Vieira, Eric Cantona and Jean Tigana all started their careers by the Mediterranean.

Close to North Africa and the Basque Country, the area has also been a melting pot for international talent. Just Fontaine, scorer of a record number of goals at a single World Cup finals, made the journey from Casablanca to OGC Nice, dominant in the 1950s. A founding member of the French league in 1932-33, ‘le Gym’ quickly developed rivalries with Marseille and, in particular, Cannes – their clashes known as the Derby de la Côte d’Azur.

Cannes would later fade, leaving Nice to challenge the big northern clubs of Stade de Reims and Lille. The prolific Fontaine moved from Nice to Reims in 1956, though Nice still beat a strong Rangers side in the European Cup of 1956-57. The great Real Madrid stopped the Eaglets’ progress, as they did again in 1960.

The next great European night at the Stade du Ray was the 3-0 win over Barcelona in the UEFA Cup of 1973-74, players such as Marc Molitor and Dominique Baratelli also taking the Aiglons to a runners-up league spot in 1976.

Left in the shadow of Marseille, Monaco and later Montpellier, Nice won the cup in 1997 but suffered a series of relegations.

The move to the Allianz Riviera, north-west of the city at Saint-Isidore by the A8 motorway known as ‘La Provençale’, came early in the 2013-14 season. Nice-born city mayor Christian Estrosi, a prime mover behind the project, has promised a practical solution for the old Stade du Ray. Seven thousand fans bade farewell to its home end, the Tribune Populaire Sud, by walking en masse from place Masséna for its last match, against Montpellier in September 2013. 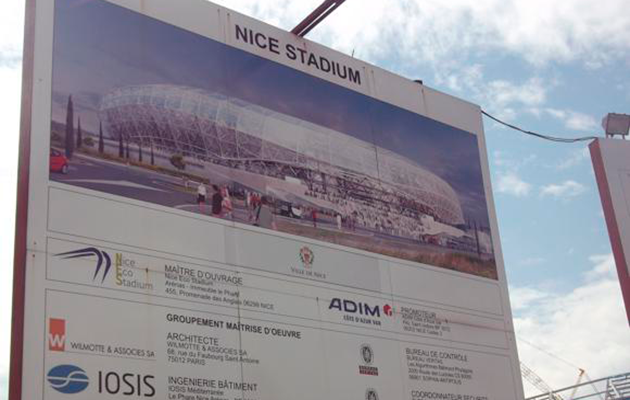 The Aéroport Nice Côte d’Azur is 6.5km (four miles) south-west of the city. Easyjet uses terminal 2, British Airways and Ryanair terminal 1, a free shuttle linking the two. Shuttle bus (€6) Nos.98 and 99 run to town every 20min and 30min respectively – only No.99 runs to Nice main train station (15min). Both call at both terminals. Alternatively, city bus No.23 (€1.50, day pass €5, ten-journey multi €10) serves terminal 1 and Thiers/Gambetta near the station.

Single tickets for all three bus services are valid for an onward journey by bus or tramway, total validity 74min. The one-line tramway will be complemented by two new lines, one serving the airport and Allianz Riviera, by 2017.

On match days, special bus No.95 sets off every 6min from Hôpital St-Roch east of the city centre, passing along rue de l’Hôtel des Postes and its continuations of rue de la Liberté/de la Buffa/Dante. Journey time to the stadium is 50min-1hr. On the way back it terminates at the cathedral.

Alternatively, and on other days of the week, bus No.11 sets off from the Lycée Masséna by the cathedral, passing the Carrefour supermarket at Carras Frémont, then runs to the stadium area, 40min from Masséna, 20min from Carras Frémont. The nearest stop of La Carrière is a tricky walk to reach the stadium – it would be easier to alight at Saint-Isidore/Eglise or Vérola. Coming back, the No.11 only goes as far as Carras Frémont.

Another way is to take the train from Nice-Ville to St Isidore (€1.70, 10-15min), though services are every 2hrs at weekends. From St Isidore, it’s a 10min walk along a marked route to the stadium. 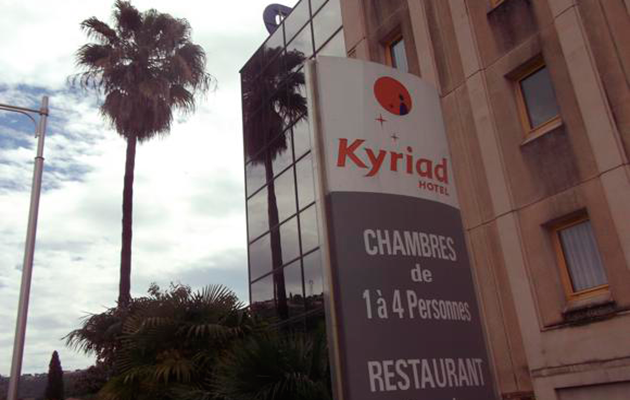 Near the Allianz Riviera, four-star Servotel on avenue Vérola should provide the Servella family ample reward for 60 years’ work in the business, guests taking advantage of the newly convenient location, outdoor pool and expansive St-Joseph restaurant. Diagonally opposite across, two-star Kyriad Nice Stade is a convenient chain with weekend deals. 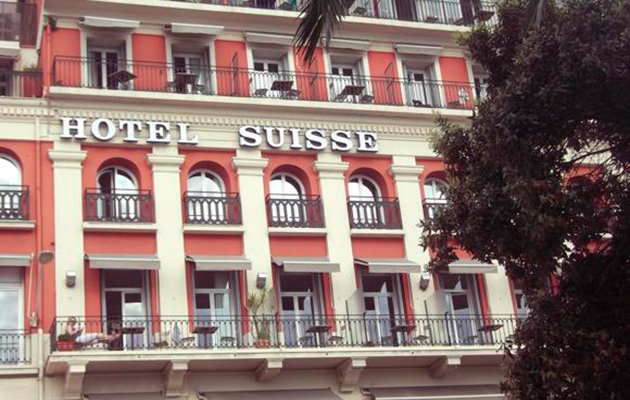 In town, seafront four-star Beau Rivage offers contemporary style with timeless class – plus the longest private beach on the Riviera. Nearby Le Méridien basks in its prestigious address of 1 promenade des Anglais, the pricier of its 300-plus rooms offering sea views. It has pools indoor and out, a rooftop restaurant and a private beach, too. Modernised, waterfront Hôtel Suisse is nearer the bars and restaurants of Vieux-Nice. 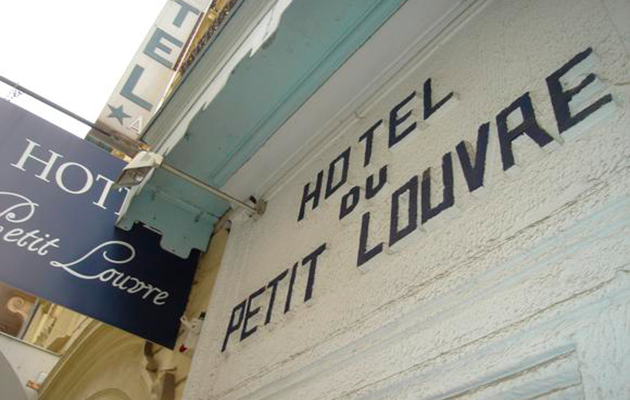 Of the plethora of downtown hotels and convenient for the station, Petit Louvre (10 rue Emma et Philippe Tiranty) is cheap but comfortable, featured on generic booking sites. In-room WiFi is a plus. Around the station, the Mirabeau is a handy three-star while Interlaken is affordable if modest. 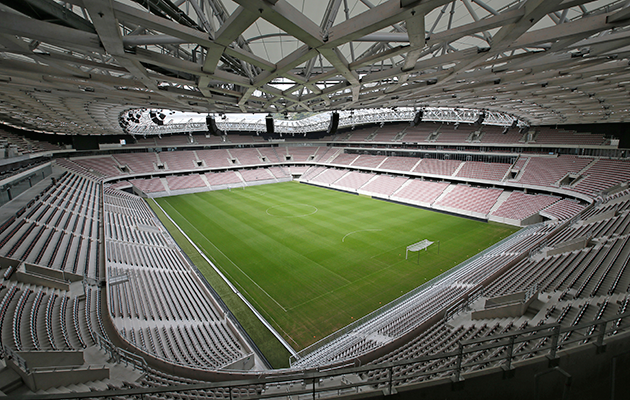 Venue for Euro 2016 new home of OGC Nice, the Allianz Riviera was opened in September 2013.

The original plan, back in 2002, was for an expansion of the Stade du Ray, home of the OGC from its inauguration in 1927.

Before then, the club had been based at Les Baumette, in the west of town just in from the seafront. Originally known as the Stade Saint-Maurice because of its surrounding location north of the city centre, the Stade du Ray saw a 3,000-capacity main stand built in 1948.

Crowds of around 20,000 gathered during the club’s golden era of the 1950s, though by the 1990s the Stade du Ray was in need of serious modernisation.

With Nice overlooked as World Cup venue for 1998, its local politicians successfully lobbied for hosting rights for Euro 2016. 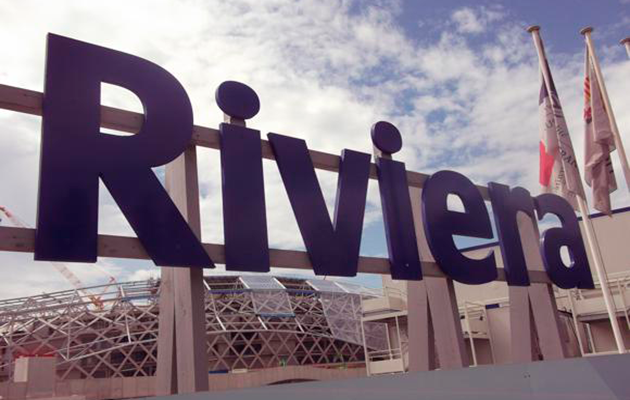 Given the condition and limitations of the Stade du Ray, in 2006 an out-of-town new-build at Nice-Lingostière was agreed.

Created by Jean-Michel Wilmotte and costing some €245 million, the Alliance Riviera puts Nice back on the football map. In 2014, Nice even hosted its first France international since 1970. 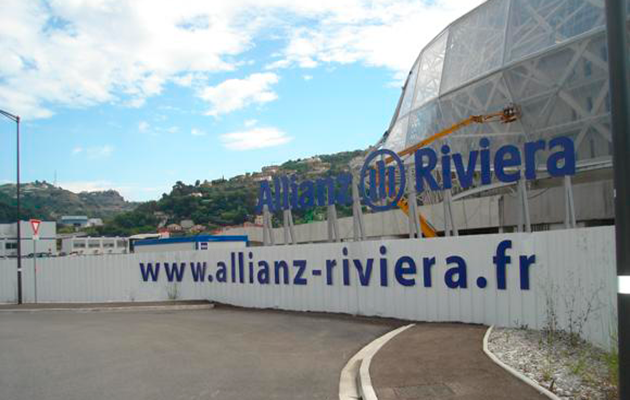 As at the Stade du Ray, the home end is still the Populaire Sud, here the nearest to rue du Sapin. For domestic fixtures, away fans are allocated the corner of the opposite goal, Tribune du Ray, by the Tribune Garibaldi, sectors C1-3, access gate C. The press box is in Tribune Ségurane opposite Garibaldi. 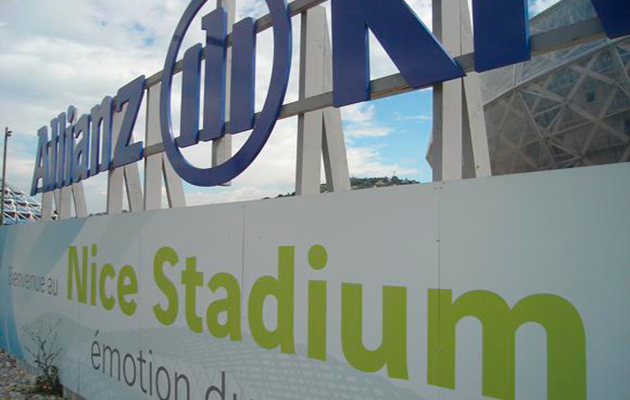 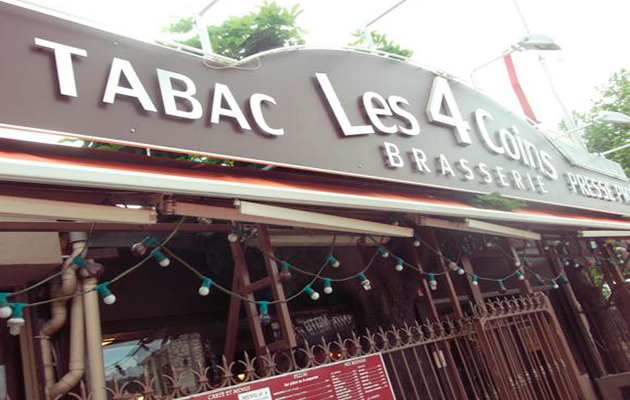 In the area around the new stadium, by Saint-Isidore/Eglise, Les 4 Coins (436 avenue Sainte-Marguérite) is a pleasant corner brasserie with bar/betting shop attached.

By the stadium, Chez Stella (280 boulevard des Jardiniers) is a pre-match drinks van with a separate sit-down terrace, decked out in OGC flags. 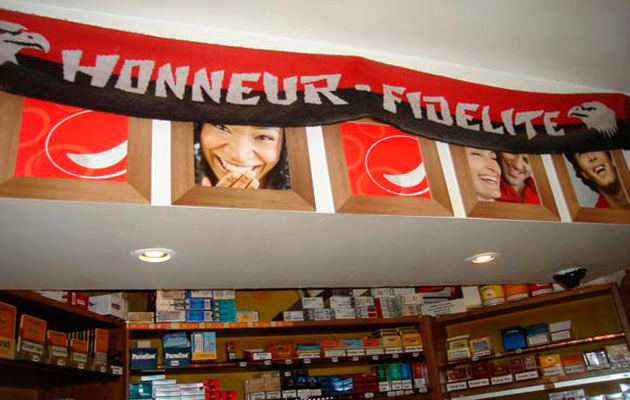 Outlets within the stadium itself include the private space of the Fan Club Rouge et Noir, and Pub 1904, accessed by season ticket, both on the Garibaldi side. Opposite, in the Ségurane, the Brasserie des Aiglons is upscale and reservation-only. 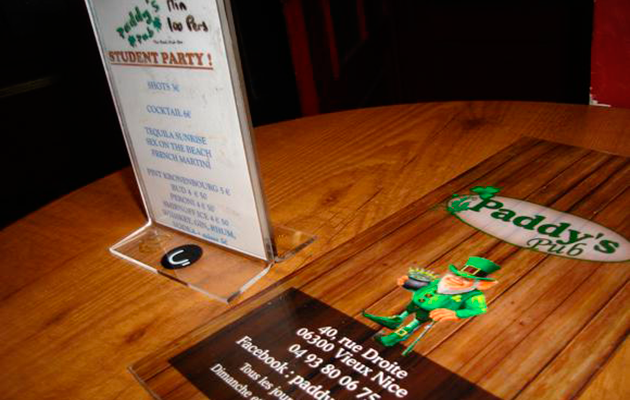 In town, bars line cours Saleya and streets nearby in Vieux-Nice, particularly rue Droite and rue de la Préfecture. Expat-friendly venues include the King’s Pub, Wayne’s and Paddy’s Pub, with the prominent Akathor probably the best of the bunch, with a genuine pub vibe, terrace, live music and big-screen sport. There’s more TV football, party music and towers of beer, at evening-only Check Point, nearer place Masséna, and focused on a younger crowd. 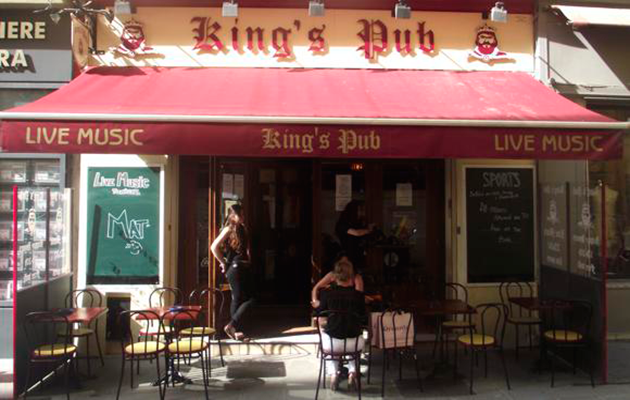 At the very top of rue Droite where it meets rues Collet and Sainte-Claire, family-run Le Sauveur is a classic OGCN hang-out, named after the grandfather of the current owner, Sauveur Papa, a mad supporter of Le Gym in the club’s classic era. Among the OGC Nice paraphernalia are messages in praise of the historic region of Savoy and the pan bagnat, a tuna bap, which are to Provence what pasties are to Cornwall. 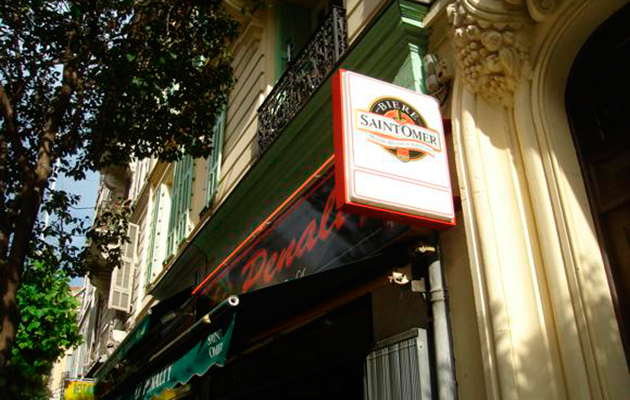 Towards to the old stadium, behind the station, Le Penalty (2 rue Vernier) is another friendly locals’ bar focused on Nissa La Bella, run by a singing, bearded gentlemen whose portrait sits amid the red-and-black iconography. A St-Omer beer can be enjoyed on the sunny terrace. 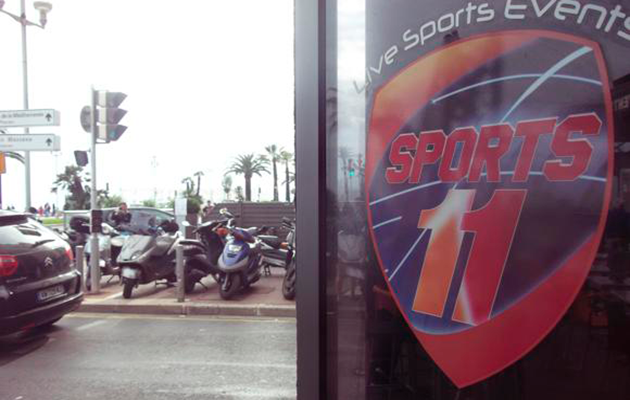 On the promenade, Sports 11 is a US-style sports bar-cum-cocktail spot decked out in images and equipment from football, tennis and Formula One.