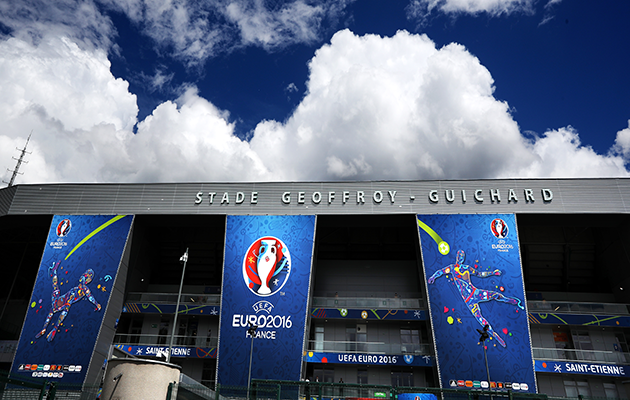 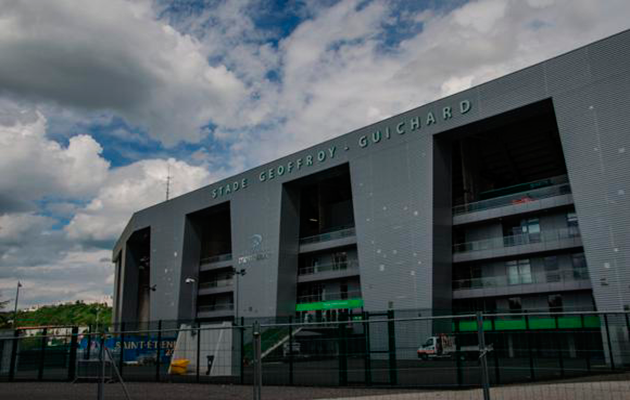 The most romantic name in French club football represents the former industrial hub of Saint-Etienne. Forever linked with the great side of the 1970s, AS St-Etienne and the epic 1998 World Cup clash between England and Argentina, this revamped art destination west of Lyon will once again stage a major tournament in 2016.

As the Stade Geoffroy-Guichard prepares to host the European Championships, its home club has climbed its way back onto the European stage after decades of decline and scandal. Narrowly missing out on a Champions League spot in 2013-14, AS St-Etienne compete for the fifth consecutive season in the Europa League, reviving memories of classic nights and classic matches against Bayern Munich, Liverpool and Manchester United back in the 1970s.

Geoffroy Guichard was the local entrepreneur behind the Casino supermarket chain, set up in Saint-Etienne. Own-brand goods, loyalty cards, trading stamps, sell-by dates, they all started here. The company started up the sports club in 1912, the football section adopting its green colour scheme and, originally, its name, after World War I.

As a football club, AS St-Etienne are a post-war phenomenon, first winning the title in 1957 and dominating the domestic game from the mid-1960s onwards. At the helm was president Roger Rocher, a former local miner turned industrialist, who had taken over from Geoffroy Guichard’s sport-mad son Pierre in 1961. It was Rocher, a St-Etienne man through and through (‘In football, St-Etienne is the capital, Lyon the suburbs’), who lifted the club to cult status in France, dominating the domestic game long before Marseille or Lyon managed to.

But it was only in the mid-1970s that ‘Les Verts’ began to make progress in Europe. St-Etienne were stopped by Franz Beckenbauer’s Bayern Munich two years running, the second time the disputably thick width of the crossbar preventing the French champions from taking the lead in the 1976 European Cup Final in Glasgow.

AS St-Etienne is also where Michel Platini finished his French playing career before joining Juventus, helping Les Verts to a record tenth title but not making a European final. Three years later, Platini’s France did win Euro 84, their captain scoring a hat-trick at the Geoffroy-Guichard against Yugoslavia in their final group game.

Le Chaudron, as it still nicknamed, ‘The Cauldron’, was relit for the 1998 World Cup. It was Platini’s idea that, given the quality of French infrastructure, groups should not be confined region-by-region, but games distributed around France. Thus crowds at Saint-Etienne saw Austria, Chile, Holland, Iran, Mexico, Morocco, Paraguay, Scotland, Spain and Yugoslavia – the World Cup circus pulling out of town after the heartstopping 2-2 draw between England and Argentina, Beckham’s red card, Michael Owen’s wondergoal, David Batty’s penalty and all.

Meanwhile, AS St-Etienne suffered scandal after scandal and attempted comeback after comeback – while local rivals Olympique Lyon were claiming seven straight titles. With the League Cup win in 2013, AS St-Etienne have bounced back, making European competition five years running. There’s life in Les Verts yet. 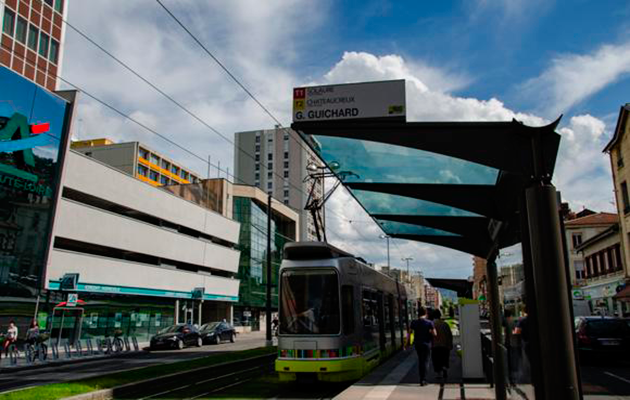 Saint-Etienne’s underused airport is 12km (7.5 miles) north-west of town. There’s no direct public transport to town. City bus No.37 only runs to Hôpital Nord, where you must change onto tramway T1 for town, passing the Stade Geoffroy-Guichard. Tramway T2 runs parallel, then onto Saint-Etienne’s train station of Chateaucreux. Radiotaxis St-Etienne (+33 4 77 25 42 42) charge €20-€25 from airport to town.

The nearest main airport is Lyon St-Exupery but with no direct transport to Saint-Etienne. There’s a direct rhônexpress tram to Lyon Part-Dieu, where a train leaves every 30min for St-Etienne Chateaucreux (50min journey time, €12).

In Saint-Etienne, transport consists of a two-line tramway and buses. A single ticket is €1.40.

The Geoffroy-Guichard has its own tramstop on the T1 and T2 lines, seven north of the Hotel de Ville – it’s then an 8min walk along rue Claude Odde/boulevard Roger Rocher. 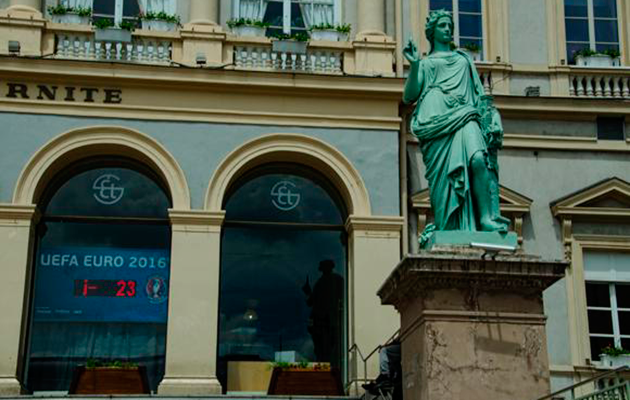 The Saint-Etienne Tourist Office has a comprehensive database of hotels.

There is plenty of affordable accommodation around the Hôtel de Ville in the city centre. Two-star, design-friendly Hotel Continental offers cheap rooms with shared facilities as well as comfortable, mid-range ones. Opposite, Hotel Le Cheval Noir is more basic but equally friendly. Equally central, some of the rooms in the Hotel de la Tour suffer from years of guests smoking, and those on a budget may be better accommodated at the brighter Furania.

Nearby, the three-star Hotel Tenor is a notch above the competition while the ResidHotel comprises 76 studios and apartments. 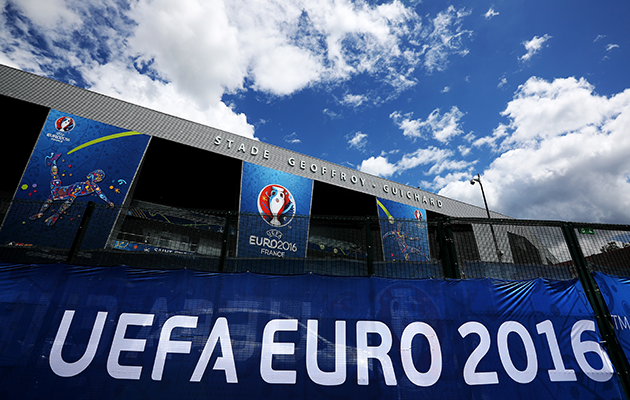 Modernised for Euro 2016, the Stade Geoffroy-Guichard has been St-Etienne’s home for most of the club’s history. It is known as Le Chaudron, the Cauldron, based on its reputation earned and maintained since the 1970s.

Named after the club’s founder who bought the land it was built on, the stadium was opened in 1931, when Les Verts were still a essentially a works team. Holding less than 2,000 spectators, with a running track and changing and administrative facilities in the one stand, the Geoffroy-Guichard suited St-Etienne’s then modest needs.

A second stand was added soon afterwards but Le Chaudron didn’t resemble the English-style football ground of Rocheteau lore until Les Verts’ first title win of 1957. With the running track removed and standing areas opened, capacity rose to 25,000-plus, floodlights erected a decade later when the City of Saint-Etienne bought the stadium from the Guichard dynasty.

After expansion to nearly 40,000 in the golden years of the late 1960s, the next real overhaul came with the hosting of Euro 84. With three new stands, capacity reached nearly 50,000, and crowds for league games remained high despite the club’s demise.

St-Etienne’s fortunes were hardly better by the time France 98 came around but, as head of the organising committee, ex-Verts star Michel Platini insisted on the stadium’s inclusion. The north and south terraces were knocked down and all-seater stands raised their place. The pitch was also relaid, the perfect canvas for Michael Owen to score his wonder goal for England against Argentina here.

Since then, after talk of a move, the Geoffroy-Guichard has been chosen for Euro 2016. Building works took place between 2011 and 2014, reducing capacity to the current 42,000. 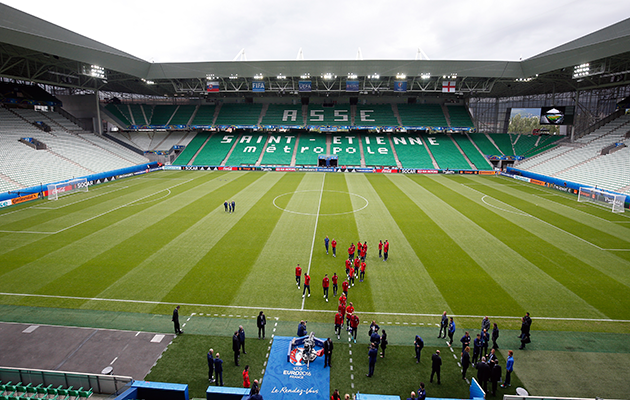 The traditional home end is the Kop Nord, with the Paret SupErieur tier above, mirrored by the Kop Sud with the Snella tier above. For league games, away fans are placed in an area between the Kop Nord and the sideline Pierre Faurand stand. Press, VIP and the best seats are found opposite, the Tribune Officielle. 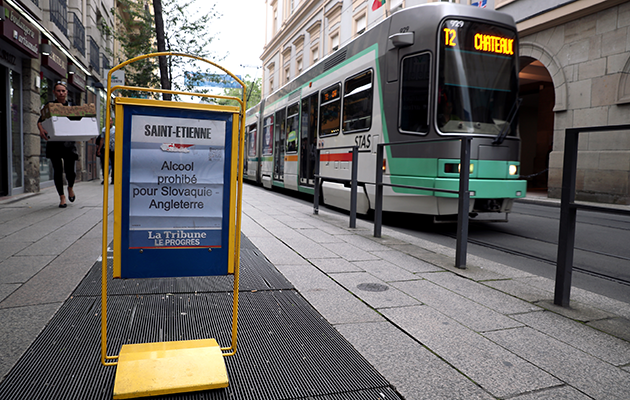 The Geoffroy-Guichard does not want for pre-match bars, although a ban on alcohol is in place for the England-Slovakia game..

Pride of place goes to the Chaudron Vert (23 rue des Trois Glorieuses), the supporters’ bar/restaurant that opened shortly before the memorable night in 1976 when Rocheteau’s Verts beat Dynamo Kyiv across the road. Set by two hypermarkets over the main road north of the stadium, it also features a grill and outdoor bar for warmer nights at the Geoffroy-Guichard. 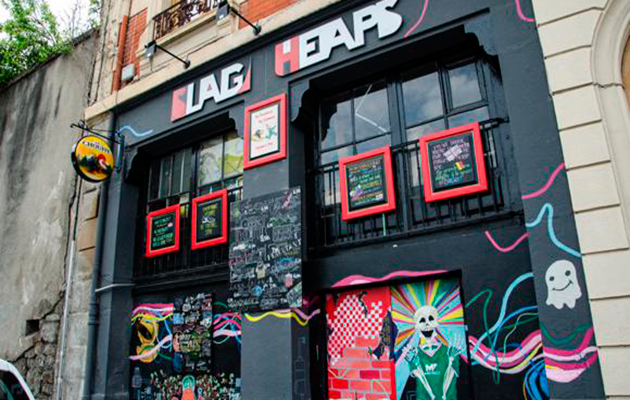 Closer to the stadium, two bars stand along rue Bergson: the Cafe des Abattoires (No.137), with its framed flag and TV, and suitably raucous Le Bergson (No.119), bar staff singing along with fans as kick-off approaches. By the club shop, the Casino Cafeteria is a standard pit-stop for a pre-match snack.