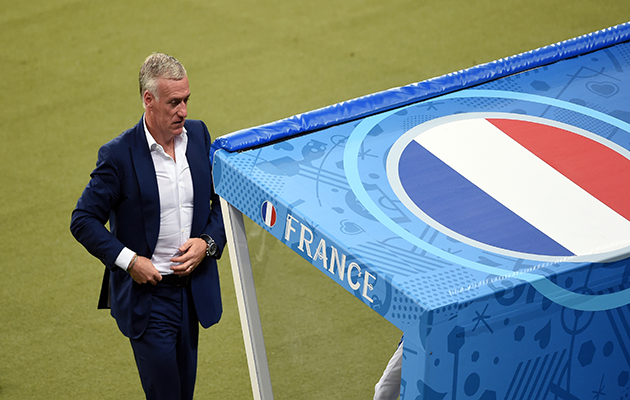 France coach Didier Deschamps has spoken of the huge sense of disappointment enveloping his players after the 1-0 extra-time defeat to Portugal in Sunday’s Euro 2016 final.

Portugal emerged victorious courtesy of a long-range goal struck by substitute Eder in the second period of extra-time. Defeat was all the more painful for France after they had struck the post through Andre-Pierre Gignac in the last minute of normal time and had generally created the better chances in what was a cagey final at the Stade de France.

“We’ve missed a unique opportunity to win a Euros in our own country,” said a disappointed Deschamps. “There are no words. The disappointment is there, and it’s huge, and it will take time to digest it. But we won together, we suffer together and today we lost together.

“We so wanted to rouse the French people and it would have been magnificent to bring the trophy home to them. But unfortunately that isn’t going to be the case. It’s a great disappointment for it to end now, with this final.

“I’m very proud of what these players have achieved and we must not throw everything that we’ve done away, but we lost a great chance to be European champions: not the only one, perhaps, but a great one.”

Deschamps, who is expected to remain France coach until the 2018 World Cup finals, was asked whether the extra day’s rest enjoyed by Portugal after their their semi-final has been significant.

“Of course we used a lot of energy against Germany on Thursday, but, if I say that, it looks like I’m seeking excuses,” added Deschamps. “There’s a big difference between three or four days to recover is a great deal. We put a lot of energy into the Germany match, and we could have benefited from a bit more freshness this evening. That, in turn, would have helped us be more clinical.

“But there you are. The winner always merits their trophy. They didn’t make it to the final by chance. This is the first time a team who finished third in their group finishes as European champions. They didn’t win many games in normal time, but they won the important one. Perhaps there were some other generations in Portuguese football with more talent, but they didn’t win. This team won.”