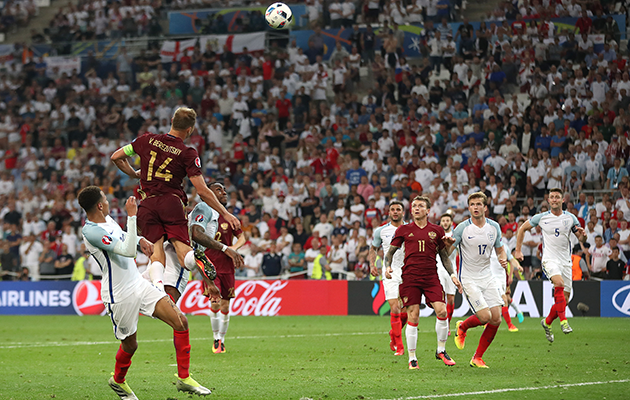 Match overview:
An enterprising England hit the ground running against an injury-depleted Russian side, but it took until the 71st minute for their dominance to be rewarded. A superbly-struck free-kick from Eric Dier appeared to have given Roy Hodgson’s sides the points, but Russia, who until that point had offered little going forward, earned a share of the spoils though a stoppage time Vasili Berezutski header.

Key moment:
Russia offered little from an attacking point of view but they only needed one chance to exploit England’s defensive vulnerabilities. Just as it looked like England’s overall superiority would be rewarded with three points, up popped Vasili Berezutski in injury time to earn Russia a share of the spoils.

Man of the match:
Eric Dier capped a typically steady performance in the holding role with a wonderful free-kick from the egde of the area.

Matter of fact:
England maintained theiur unenviable record of never having won their opening game at the European Championships.

Talking point:
The decision to field Wayne Rooney in a midfield role for the first time in his 13-year England career was a qualified success. The England skipper was at the heart of much of England’s best work in the first 45 minutes. He faded after the break, a period which coincided with Russia’s best spell and was eventually replaced by Jack Wilshere.