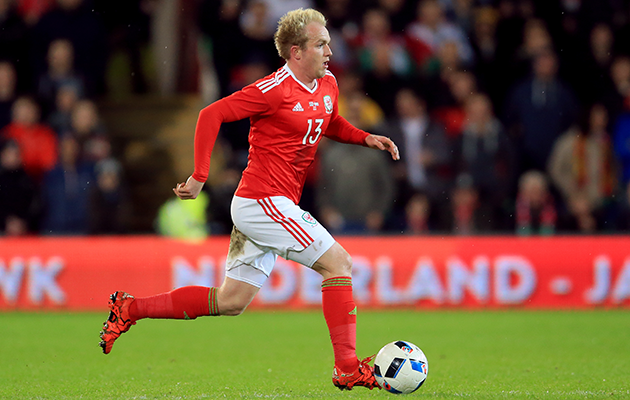 As his nation prepares to be part of their first major senior international tournament for 58 years, the 22-year-old, who has had long lay-offs from the game due to injury and loan moves at club level, reflects on an eventful international career already at such a young age.

World Soccer: You made your debut in March 2013, coming on for Gareth Bale in the 2-1 win over Scotland, what do you remember from the day?
Jonny Williams: I remember it being very cold. Arriving in Scotland it was snowing and it was a massive game, a big, home nation derby.

I didn’t really expect to come on if I’m being honest, but [Gareth] Baley was struggling with an illness in the first 10 minutes. I’d gone out at half time with the fitness coach and it was then I started to feel like I was going to be making my senior international debut.

I didn’t really feel too nervous at the time and that helped me when I stepped on to the pitch, I played with that freedom that the manager (Chris Coleman) had given me at a young age. Being in and around his squads he always said this is going to be you one day.

I had to go and play and play out of my skin and we got a result in the end, 2-1 and I was blessed enough to go and play with Gareth a few days later against Croatia but unfortunately we didn’t hold on, we played well and gave them a right game.

Those two games were massive in my career and moved me up to the senior international level and if it wasn’t for injuries then hopefully it would have kicked on a bit more.

They’re massive moments and to come back and play in the final Wales EURO 2016 qualifying game against Andorra after being out for 12 months (due to a groin injury) was special, being part of the first three games and then missing the middle five was hard but then to come in for the last two was massive for me, I was delighted to be part of that.

Despite being injured I was even able to go to the Belgium game at home and spend two weeks with the squad and the physios who welcomed me.

A number of the Welsh squad have played together since a very young age, what is like being part of that group of players?
It’s fun. Everyone looks forward to going away; you’re buzzing when that international break is coming and you’re excited to go away with the boys.

You’re not looking at it like you have to stay in a hotel for a week and you can’t do anything. The manager is happy, if we’ve got time, to go out and socialise, go shopping in the afternoon or walk down to Cardiff Bay; just to get out of the hotel and do something, after we’ve trained and done or gym sessions.

It’s a great environment to go and work in; he’s been fantastic for every one of us, he trusts us when we’re training to train well and most importantly have a laugh and joke when we can.

It’s great that the likes of Gareth [Bale], who’s playing at Real Madrid, can have a laugh and joke with us and for the boys coming up.

It gives you real confidence to go and play with freedom and I think that it’s essential. It’s great to have the players I’ve grown up with like Ben Davies, Emyr [Huws] and [Danny] Ward around.

How excited have your friends and family been about qualification?
It’s been carnage with ticket requests! But most importantly my Dad, who was born in Wales, is sorted.

He’s come to every game, home and away, even when I’ve been injured. He went to Israel even though I was injured, hoping I will be in the squad and he will be at every game in France.

I might not ever get a chance to play in a major tournament again so it’s one of those lifetime opportunities and I want to give myself the best chance and let people know I can go and play a whole season injury free and I’ve done that.

Wales have not qualified for an international tournament for 58 years, what are you expecting from France 2016?
It will be great. We’ve spent 10 days together maximum at times before with double-headers but we’ll have a week in Portugal at the training camp and then find out the final 23. Then we’ll be away with each other and have to get used to each other.

You have Slovakia, England and Russia in your group, what are your expectations?
It’s going to be a tough group. We haven’t played Slovakia in a while as a nation, the same with Russia and England. It’s going to be exciting, it’s a great occasion and may the best team win.

We’re not going there to have a good time and maybe pick up a draw here and there, you, or other teams can’t look at us after what we’ve achieved and not think we can be a threat.

Traditionally, Wales have been the small team, playing the big teams as an underdog, but now you have to step up and cast away that tag?
That’s true. We’ve beaten Belgium and drawn away with them. We can go to France as a team wanting to do well but we’ve got to be realistic and take one game at a time.

The chance is there if we want to do well and if we do our best we’ve got a great chance of progressing from the group.

What is Wales manager Chris Coleman like?
He’s been first class. Ever since he stepped in I’ve been in more or less every squad when I’ve been fit and when I haven’t been fit he’s been on the phone asking how I’m doing, how I’m getting on.

Asking about loan moves and how they’re going. That’s massive for me as a player; it gives me confidence to come back into the Welsh set-up and slot back in like I’ve never been away.

To come in, in hard circumstances (after Gary Speed), was tough but to carry the start we had to this campaign through 10 games was fantastic. All the praise goes to him and the fans because without them it may have probably never happened.

How would you describe the Wales football team to the global football fan?
You can expect a team that will put everything on the line; heart and desire – that’s standard for a Welsh team throughout the last 10 years certainly.

They’ll put everything into it – we’re hard to beat, blessed with some great defenders that play strong and play with wing backs and a real solid foundation at the back.

Along with that we’ve got some flair players; hard workers in midfield and up top, so we’ve got a great mix, no ‘Big Time Charlie’s’.

We’ve got honest players and we’re lucky enough to have one of the world’s best players in our team. It’s simple as that. If we can keep him fit, it’s no secret.

In our qualification campaign Gareth was our match winner in a lot of our games, but these victories were not possible without our defence and some of Wayne Hennessey’s first class saves.

If we can keep our best players fit, who know what could happen?