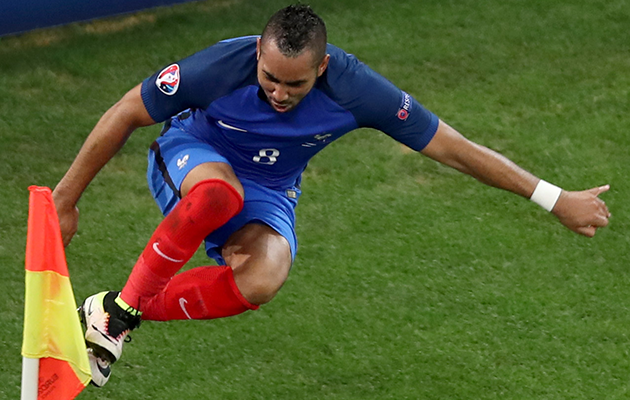 Hosts France became the first team to qualify for the knockout stages after late goals from Antoine Griezmann and Dimitri Payet crushed brave Albanian resistance in Marseille. Albania had beaten France in a friendly last year and restricted the French to very few chances over the course of 90 minutes. Missing their captain and talisman Lorik Cana after his red card against Switzerland, Albania frsutrated throughout the match and the only French efforts on target were the hosts’ two goals.

Antoine Griezmann’s 90th minute header broke the deadlock, just as it looked as if Albania would frustrate the hosts.

Dimitri Payet was deployed in a more central role and the French efforts to break down Albania’s defensive ranks. He added to his growing reputation with a fine goal late in injury time.

Kingsley Coman, at 20 years and two days, became the youngest starter for France in a major tournament.

Didier Deschamps flexed his muscles by dropping Antoine Griezmann and Paul Pogba, bringing in Anthony Martial and Kingsley Coman and switching to a 4-2-3-1 formation, with Dimitri Payet in the more central playmaking role where he had finished the opening game against Romania. But the changes did not improve France. The midfield was static, unable to get beyond striker Olivier Giroud and frustrated by Albania’s deep back-line.

Martial’s replacement by Pogba for the second half was an admission by Deschamps that he had made a mistake. France upped the tempo of their attacks but still could not find a way through the massed Albanian ranks – until Griezmann’s dramatic header and Payet’s late, late strike.