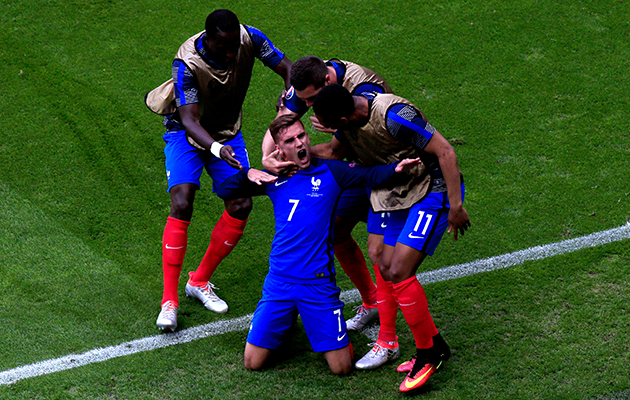 Antoine Griezmann scored two second half goals to give France  a 2-1 Round of 16 victory over Ireland in Lyon. The hosts came from behind after Ireland had taken an early lead from the penalty spot. It was a couragous display by an Irish side reduced to ten men after the dismissal of Shane Duffy midway through the second half.

Ireland stunned the hosts and the majority of the supporters in the Parc Olympique Lyonnais, when they went ahead after just two minutes. Shane Long took advantage of confusion at the heart of the French defence before being bundled over by a clumsy Paul Pogba challenge. Up stepped Robbie Brady to slam home the resulting penalty off the inside of the post.

France were slow to repond and the match was approaching the hour mark before parity was restored. France moved the ball swiftly across the pitch to Bacary Sagna whose cross picked out Antoine Griezmann and the Atletico Madrid man powered home a header from 12 yards. Three minutes later and France were ahead when Olivier Giroud’s flick fell to Griezmann and the forward drilled a low shot past Darren Randolph.

Ireland’s hopes received a fatal blow shortly afterwards when Griezmann burst through on goal only to be hauled down by Shane Duffy. The challenge gave the referee little option but to show the defender a red card.

France pressed for a third but a combination of desperate Irish defending combined with some wasteful French finishing kept the scoreline respectable.

The introduction of Kinglsey Coman in place of N’Golo Kanté provided France with an additional pacey attacking outlet. The move forced Martin O’Neill’s side to defend deeper, from where the elusive Griezmann was able to exploit the spaces vacated by a wilting defence.

After a quiet first half Griezmann came alive to scored both French goals and showed why many people predicted before Euro 2016 that he would be the outstanding player of the tournament. The forward was also responsible for the red card shown to Shane Duffy.

France are unbeaten in their last 16 tournament games on home soil (won 14, drawn 2). This was their first win in a knockout match at the European Championships since 2000.

France go through to the quarter-finals, although they will be without Adil Rami and N’Golo Kanté after both men picked up their second yellow cards of the tournament. They are beginning to look a potent attacking force, but have yet to produce a complete performance to justify their status as tournament favourites.