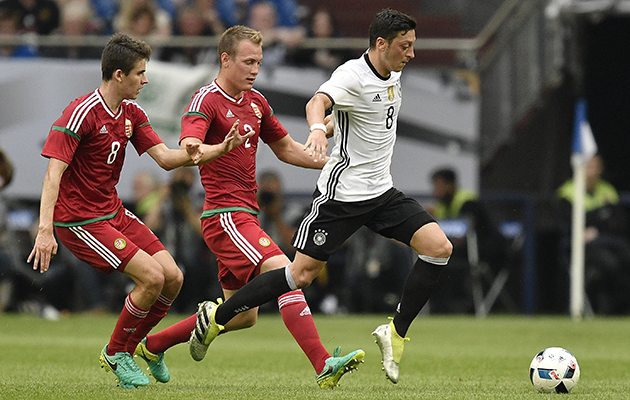 World Soccer: Do you feel you will be champions in France this summer?
Mesut Ozil: We have a big, strong squad so it’s normal that our dream will be to be crowned champions in France, that’s true. But I still expect a really tough competition.

Germany have won the title three times, as have Spain. What would it be like to make history and win it again?
What can I say? If Germany win another Euros then it will be very important for the country and for our football history. It’s a challenge and it’s our aim, but I honestly think this tournament in France will be one of the most open in recent years. A lot of other teams believe they can win.

Who do you think will be your biggest rivals for the title?
It’s hard to speak about favourites because, as I say, there are many. It’s normal that France as hosts, Spain as holders, Italy and England…we know they will all be tough.

You see the English players week-in, week-out in the Premier League. What do you think of their chances?
England have improved a lot in the last two years. They now have young players of a high level and the team has momentum. I would say they are able to fight to get to the Final. For me, they should be one of the favourites for the title – and that’s not just a diplomatic answer because I play in England!

What do you make of Germany’s group?
For me, there’s no such thing as an easy group in these Euros. Germany is always expected to win every game, no matter who we play, and that’s extra pressure for the team. Poland, Ukraine and Northern Ireland will all arrive on the pitch against us with a great spirit and a big determination – not only because there are three points at stake but because of what it means to beat the Germans. We have to be ready for that.

Germany-Poland games always have a big atmosphere. Is it a special fixture?
It is. For Poland, we know that a match against us is always special and so it’s never easy. You know exactly what the atmosphere will be like – and winning is going to be hard work. With Robert Lewandowski up front they have a real star, but he’s by no means the only one to be aware of. They have a strong team.

Who do you think might be a surprise challenger for the title?
Belgium have a strong squad with a good chance of going a long way in the competition. I would be looking out for their performances, I think.