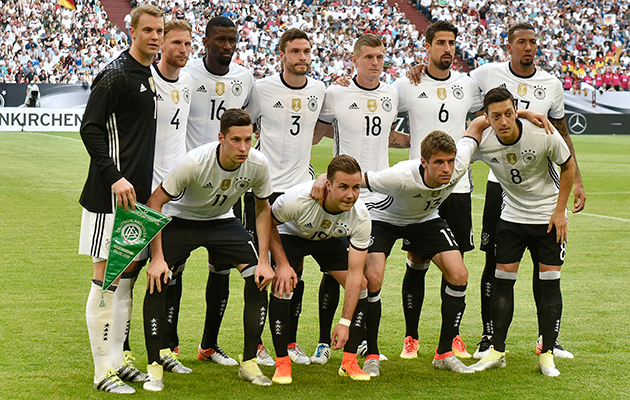 Germany were hit by injuries to key players Marco Reus and Ilkay Gundogan, prompting Joachim Low to call up a number of youngsters to the final 23, notably Julian Draxler, Joshua Kimmich, Julian Weigl and Leroy Sane.

Bernd Leno was preferred to Ron-Robert Zieler as third-choice keeper, while Sebastian Rudy, Karim Bellarabi and Julian Brandt were included in the provisional 27-man party but dropped from the final 23.

Benedikt Howedes is likely to start in the problem right-back position after being preferred to Rudy and the out-of-favour Matthias Ginter.

Name: Manuel Neuer
Caps/goals: 64/0
Club: Bayern Munich
Age: 30 (27.03.86)
Third in the ballot for the 2014 Ballon d’Or, the ball-playing “sweeper-keeper” has revolutionised his position, covering almost the entire final third of the pitch. In five out of the last six years, he has won the Weisse Weste (white waistcoat) trophy for the most Bundesliga clean sheets.

Marc-Andre ter Stegen
5/0
Barcelona (Spa)
Age 24 (30.04.92)
Joined Barca in 2014 but has become frustrated at being second choice and only starting Champions League and Spanish Cup games. Born and raised in the football hot-spot of Monchengladbach, he has, his surname suggests, Dutch ancestry.

Defenders
Jerome Boateng
57/0
Bayern Munich
Age 27 (03.09.88)
Central defender who can fill in as an emergency full-back and has seemingly overcome the lapses in concentration and inexplicable off days of his early career.

Emre Can
5/0
Liverpool (Eng)
Age 22 (12.01.94)
Despite being a strong and authoritative presence in the Liverpool midfield, he is normally used by Joachim Low at right-back, where has looked infinitely more impressive going forward than in his defensive duties. Came through the youth ranks at Bayern Munich and was once described by club chairman Karl-Heinz Rummenigge as “one of the biggest talents in German football”.

Jonas Hector
12/1
Cologne
Age 26 (27.05.90)
From the Saarland region near the French border, the resourceful left-back was the only player to appear in all nine of Germany’s games in 2015. Gets forward with purpose, but needs to work on his final ball. Rejected as a youngster by Bayern Munich.

Mats Hummels
46/4
Borussia Dortmund
Age 27 (16.12.88)
Elegant and intelligent central defender, who on a good day makes it all look so easy but can be prone to carelessness. Outstanding in his anticipation, he rarely commits fouls and is very much in his element setting up attacks. Works for UNICEF, highlighting the plight of children in war-torn lands.

Shkodran Mustafi
10/0
Valencia (Spa)
Age 24 (17.04.92)
German-born centre-back of Albanian lineage. Rugged, resilient and apparently immune to off-days, he has played in England, Italy and Spain, and appeared in three matches at Brazil 2014.

Jonathan Tah
1/0
Bayer Leverkusen
Age 20 (11.02.96)
Big but agile centre-back who has excelled in his first full Bundesliga season for Leverkusen. German father, Ivorian mother. Late addition to the squad after the withdrawal on the eve of the finals of the injured Antonio Rüdiger.

Sami Khedira
58/5
Juventus (Ita)
Age 29 (04.04.87)
Despite a wretched run of injuries of late, the box-to-box or holding midfielder remains one of Low’s favourites. Diligent, tactically aware and a natural leader, he says he contemplated quitting the game while stricken with a long-term knee injury when playing for Stuttgart’s youth team.

Toni Kroos
64/11
Real Madrid (Spa)
Age 26 (04.01.90)
Equally at home sitting deep or as a number 10, his strong suits are his range of pass, tempo-changing flair, set-piece delivery and shooting from distance. His mother, Birgit, was a badminton champion in the old East Germany.

Mesut Ozil
72/19
Arsenal (Eng)
Age 27 (15.10.88)
Talented creator who can pull the strings centrally or out wide. Top notch in his touch and awareness, he is a master at locating pockets of space and is especially dangerous when leading the counter-charge. Lends his support to BigShoe, a charity for children in need.

Lukas Podolski
127/48
Galatasaray (Tur)
Age 31 (04.06.85)
For the past four years, the left-sided attacking midfielder only has started in emergencies, but he retains his place in the squad thanks to his finishing power, positive attitude and back-to-front knowledge of the Low system. Third in both Germany’s all-time goals and appearances list.

Andre Schurrle
50/20
Wolfsburg
Age 25 (06.11.90)
The creator of the winning goal in the 2014 World Cup Final, he has flattered to deceive for Wolfsburg this season, yet remains an important impact sub for Low as he is happy on either flank. Recently announced his engagement to his Canadian girlfriend.

Bastian Schweinsteiger
114/23
Manchester United (Eng)
Age 31 (01.08.84)
Germany’s midfield general and captain has been plagued by injuries over the past few years and might be approaching the final curtain. However, if he can be patched up, he still has a vital role to play as the glue that holds the whole German operation together.

Julian Weigl
1/0
Borussia Dortmund
Age 20 (08.09.95)
Defensive midfielder who has been one of the revelations of the Bundesliga season for Dortmund.

Mario Gomez
62/26
Fiorentina (Ita)
Age 30 (10.07.85)
Old-school centre-forward who, after a 20-month spell in the national-team wilderness, has looked sharp on returning to the fold. On loan at Besiktas in Turkey this term.

Mario Gotze
50/17
Bayern Munich
Age 23 (03.06.92)
Wonderfully intuitive “false nine” or advanced midfielder. Has fallen on hard times since netting the winner in the 2014 World Cup Final, unable to hold down a regular berth at Bayern and sidelined for several months this term with a groin injury. Renowned for his understanding with Reus.

Thomas Muller
70/31
Bayern Munich
Age 26 (03.09.89)
Not particularly athletic or skilful, but the versatile front runner or attacking midfielder is in the form of his life at the moment and is having his best-ever goalscoring season in the Bundesliga.

Leroy Sane
3/0
Schalke
Age 20 (11.01.96)
Winger who has emerged as one of the stars of the Bundesliga. Son of Olympic gymnast Regina Weber.