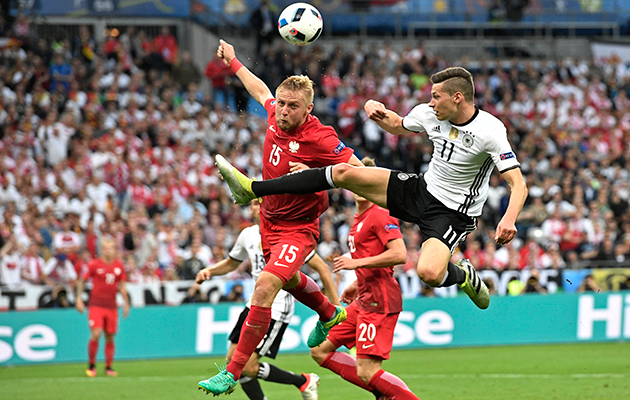 Scorers:
Germany: none
Poland: none

Match overview:
A match which never really got going and seemed destined to remain goalless from the moment that misfiring Polish striker, Arkadiusz Milik, contrived to miss the game’s only decent chance shortly after the interval. The Ajax forward came into the tournament with a burgeoning reputation and reportedly attracting the attention of several Premier League clubs, but thus far all he has to show any potential suitors is a rapidly expanding compilation of greatest misses.

To say defences were on top would be an understatement in what was a disappointing contest. After winning their opening games Germany and Poland will have been happy to have avoided defeat today, and both teams played as if that thought was at the forefront of their minds.

Key moment:
Arkadiusz Milik has been unable to bring his form from the qualifying stages into the tournament. Against Germany, he missed the best chance of the game when he failed to make contact with a perfectly weighted Kamil Grosicki cross. As the game wore on he cut an increasingly forlorn figure – his plight not helped by the harranguing he received from a visibly frustrated Poland captain Robert Lewandowski.

Man of the match:
Germany defender Jerome Boateng put in a flawless performance which included one fantastic block to deny his Bayern Munich team-mate Robert Lewandowski.

The 18th match of Euro 2016 produced its first goalless draw.

Germany extended their unbeaten run against Poland in major tournament finals to 5 matches.

Talking point:
How do we solve a problem like Mario? Joachim Low persisted with his experiment of playing Mario Gotze as a lone frontman, but again the Bayern Munich player looked lost in this, new unaccustomed role. Two years on from the retirement of all-time leading goalscorer Miroslav Klose and Germany are still trying to fill the huge void.