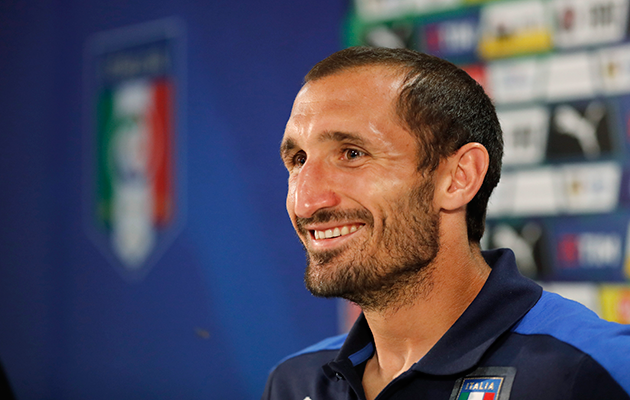 When Italian defender Giorigio Chiellini eventually decides to call it a day as a player, he might consider a career in politics.   Speaking at Casa Azzurri in Montpellier, 31-year-old, 86 times capped Chiellini was asked to comment on the outstanding political news of the day, namely the victory of the “Out” vote in the Brexit referendum:

“I am shocked…We all went to bed last night thinking that the Remain vote would win…I would be worried about a domino effect now…with other states now wanting out.   This vote, however, is the expression of a widespread, overall discontent, something that can be felt not just in Italy but all over Europe.

“But when things go wrong, that is not the time to vote for a breakup, rather that is when you should for unity…I am worried, if there was a referendum like this in Italy right now, I’m not sure that Italy too would not also vote ‘Out’…This is a worrying sign from a major, important country”.

As off the cuff analysis goes, this was not bad, was it?  Chiellini, who is a graduate of the university of Turin in “commercio e economia”, a sort of business degree done by Open University style correspondence, is no dolard.  He sometimes looks like a little “agricultural” in his brusque playing style but he is no dummy off the pitch.

Inevitably, this afternoon there was more interest Chiellini’s thoughts about Italy’s upcoming second round clash with Spain in Paris next Monday than with his intelligent reflexions on Brexit.   There is a widespread school of thought which suggests that Italy have drawn the short straw here, in the shape of Spain.

Those of us who saw Italy’s two qualifying group draws with Croatia would argue otherwise.  It could be that, at the current moment, Italy would struggle much more against Croatia than against this Spanish team.   Certainly, Chiellini did not give the impression of being “terrified” at the thought of confronting Spain, saying:

“They have been something of a problem for us from Vienna 2008 through to the last Euro.  Yet, that final in Kiev four years ago was the only match between us that was not evenly balanced, that was a game where frankly we were exhausted and not physically up to it after the semi-final win against Germany…

“I think that is the way it will be next Monday, a balanced game where the smallest details matter.   This will be a good game, I’m just sorry that it has come as a second round game…”

Asked if he thought that Italy should have played to finish second in the group and therefore in the other half of the draw, Chiellini rejected the idea, saying:

“A month ago in Coverciano, people weren’t expecting us to win our Group…so you cannot plan for these things…Despite all the negative forecasts about us, we’re still here and we can beat Spain all right, if we exploit our strengths and limit them…”

One of the typical peculiarities of this game is that Chiellini will find himself face to face with his former Juventus team mate, Alvaro Morata.   Chiellini was full of praise for Morata, saying that he should be the Real Madrid and Spain centre forward for the next 10 years, adding:

“He’s a great guy and I wish him all the best, starting from after Monday night’s game however…People like to suggest that this Spain is in crisis, but I don’t see it that way.  They lost to Croatia all right but they dominated the game splendidly for the first half hour…”

Asked about possible negative fall-out from the much-criticised 1-0 defeat suffered by second choice Italy against Ireland in Lille, Chiellini was dismissive of the notion, saying:

“You guys need to be balanced in your reporting.    Headlines like ‘Give Us Back Our Italy’ were exaggerated.   With all respect, we were already qualified, we were already top of the group and certain to go through, so we didn’t give that game much importance.   Monday is an entirely different game, it is knock out football, so we have to give it everything…”

Team predictions at this stage depend on injury news but most observers at Casa Azzurri in Montpellier are taking it for granted that Italy will start against Spain with the side which started against Belgium in their opening game 1-0 win.   Which means that Professor Chiellini will be at his usual berth on the left of the three man defence alongside Juventus team mates Andrea Barzagli and Leonardo Bonucci, not to mention in front of another Juventus player, goalkeeper captain Gigi Buffon.   “Serious Business” is about to recommence.