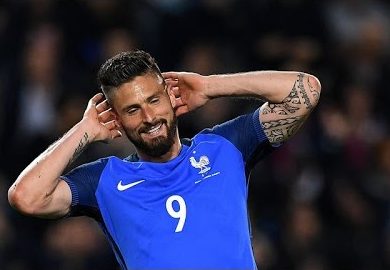 Oliver Giroud has been a lightning rod for criticism from French fans ahead of Euro 2016. Giroud scored the second goal for France in their 3-2 victory over Cameroon; but he was jeered by supporters. France Manager Didier Deschamps said that the Giroud boos were unfair.

“You hear what you want. The whistles were unfair tonight, but in Biarritz, he was applauded. People can be conditioned,” Deschamps said.

“But Olivier scored again. When you say it, you are not helpful. You are free to say what you want but this is not necessarily the truth.”

Olivier Giroud post-match: 'I don't understand the boos. We expect supporters to encourage us. It's a shame' #LesBleus #Arsenal

Giroud scored a goal from a magnificent cross from midfielder Paul Pogba. It is not the first time that the Arsenal striker has come in for criticism. He was booed at half-time and when he was substituted during France’s game against Serbia.

Meanwhile Dimitri Payet continued his impressive form for France with another sublime free-kick and Deschamps said that he could improve after not playing for three weeks, but stressed his importance to the team.

“It’s been three weeks since he played,” said Deschamps.

“This game was good for him, to get back into the pace. He can do better, but every time he touches the ball, there is something happening. And he has the quality of set-pieces, free-kicks, corners and it is something important.

“He is very important.”