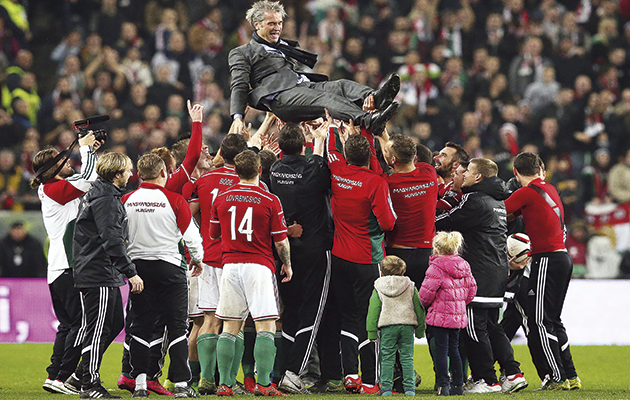 World Soccer: You took charge two-thirds of the way through qualifying. How did you approach the Hungary job?
Bernd Storck: Before July I was sporting director, then they made me coach. It was an entirely different job. I saw this as the perfect opportunity to take a new direction. When I stepped into this post I knew I had to change the style; not just the tactics but the coaching staff itself. I insisted that the Hungarian FA hire a full-time team to work around me.

Laszlo Kleinheisler hadn’t played a single league game all season when you gave him his first cap in the play-off against Norway…
I knew him very well. I observed how hard he worked in training. I was convinced that he was ready. Then he scored our only goal in Norway. He repaid my faith many times over.

The night you qualified was one of the great occasions in Hungarian football history. How was it for you?
Before the game, the weight of expectation had been really heavy, given so many past disappointments. At the final whistle, at that very moment, I honestly can’t recall what I was thinking. I do remember people jumping up and down around me, holding on to me, hugging me. That was the moment when it really hit me that we were going to France.

That night we opened another door for Hungarian football. Maybe I also set some kind of example to my fellow coaches to believe in youth. We all went back onto the pitch afterwards and sang with the supporters. Everyone was very emotional. The atmosphere was incredible.

So how do you think these young players of yours will perform at the finals in France?
This summer these young Hungarian players can prove to the world just how good they are. They won’t have a better opportunity.

How do you feel about your group?
We started work right after the draw was made. We play Austria first, so I started all my planning with them. I’ve seen their latest matches, and seen how precise and tactical their play is. I know that many people are curious about Portugal, and Cristiano Ronaldo, and how we will deal with them, but we play them last. Who knows? Maybe Portugal will have six points by then! Seriously, a team is not just one player, there are 10 others we have to play against.

A significant number of your squad play their club football in Hungary, which is by no means one of the strongest leagues in Europe…
The squad is divided about 50/50 between those who play in Hungary and those who play abroad. We showed against Norway that those in the domestic league can be relied upon to get a result, to work for each other.

They proved their worth. And if the national team does well, that raises the overall level to what we want it to be for everybody.