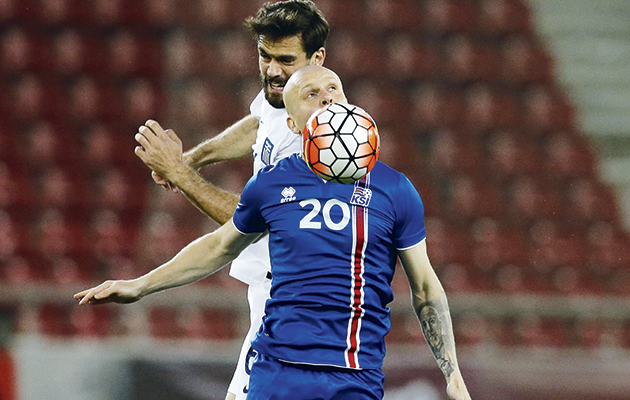 With a population of around 330,000 people, Iceland will be by far the smallest country ever to compete in the European Championship finals.

Drawn in a qualifying group with Holland, Czech Republic and Turkey, few gave them any chance of making it to France. But the players and coaching staff from the tiny nation in the North Atlantic had other ideas.

In October 2013, in the dressing room immediately after their loss to Croatia in a World Cup play-off, the team decided that the only way for their football-crazy country to cope with the disappointment would be to go to France in 2016.

And while that may have seemed an ambitious plan, three wins in the first three group games – Turkey at home, Latvia away and Holland at home – scoring eight times without conceding a single goal, filled everyone with confidence.

Building on that solid foundation, they marched on with a club-like team spirit. Well organised and defending as a unit, they won six of their first seven games, with the only loss being away to the Czechs. An incredible 1-0 victory over Holland in Amsterdam made everyone realise that the Euros were within reach.

There have probably never been such joyous celebrations after a dull, goalless draw as when Kazakhstan visited the Laugardalsvollur stadium in Reykjavík on September 6. With two games still to be played, Iceland clinched their place in France with that precious point.

For decades, football was really only a five-month summer sport in Iceland. During the long cold winters, teams practised but facilities were poor. They played in small halls meant for indoor sports, and on gravel pitches outside, usually covered with snow for long periods. Wind and snowstorms did not help during the seven months of pre-season.

In the early 2000s, the Icelandic FA and local communities began a project to improve facilities. There are now seven full-size indoor pitches in Iceland and a further 20 full-size artificial grass pitches outdoors around the country. In addition, most schools now have a small artificial football pitch.

Footballers of all ages, boys and girls, are able to practise in decent conditions all year round.

The development of young players, severely restricted over the years because of that lack of facilities, has changed dramatically. In the past, Icelandic footballers were known to be powerful  but, with a few notable exceptions, lacked technical ability. Today’s youngsters have better technique while still retaining the traditional mental strength and power of their predecessors.

The most important players today are midfielders Gylfi Sigurdsson and Aron Gunnarsson. Both played at the Under-21 European Championship in Denmark in 2011 – when Iceland first qualified for that tournament – along with their team-mates in midfield Johann Gudmundsson and Birkir Bjarnason, and forwards Kolbeinn Sigthorsson and Alfred Finnbogason.

Discipline and organisation were two of the main things Lars Lagerback focused on after taking over the senior side in 2011. Former coach Olafur Johannesson had put many youngsters in the team and, although results were not favourable, they gained valuable experience and were well equipped for a step to the next level when the Swede arrived on the scene. 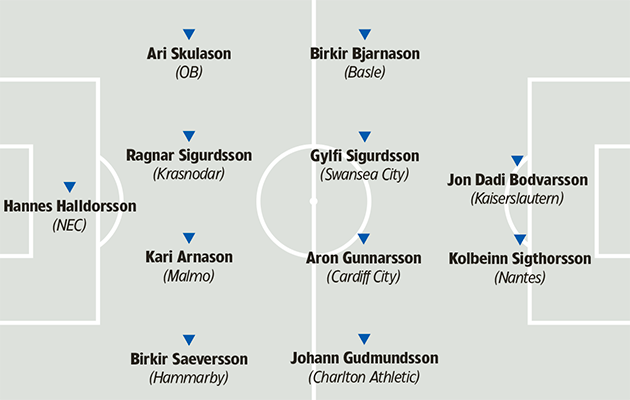 Since Lars Lagerback took over as coach in October 2011 he has stuck to the 4-4-2 system that he favoured for so many years with his native Sweden. With his current team, the emphasis has very much been on cohesion and team spirit, both in defence and attack.

Through the years, Iceland has produced some good footballers, and a few excellent ones, but the depth in quality now is better than ever. For the first time, everybody in the team – or in the squad for that matter – is comfortable with keeping the ball and waiting patiently for the right time to attack with speed and power.

The old saying that “a chain is never stronger than its weakest link” is acknowledged by everybody on the team. They all accept that each of them has to give 100 per cent, every game; 95 per cent for a side like Iceland is not enough on the big stage. No one is too big for the team. A very good example of that is star midfielder Gylfi Sigurdsson, who was top goalscorer in qualifying with six, but is also one of the best defenders in the team with a fantastic work rate.

Sigurdsson and Aron Gunnarsson have played major roles under Lagerback, as well as fellow midfielders Birkir Bjarnason and Johann Gudmundsson, and striker Kolbeinn Sigthorsson, who is certain to lead the line in France even though he has not scored regularly at club level this season.

However, his ratio with the national team is a goal every other match. Sigurdsson suffered a dip in form for the first half of the season, but has stepped up a gear lately, while Bjarnason has been doing well for Basle in Switzerland.

There is some concern around captain Gunnarsson, who was fantastic during the qualifiers but has not been a regular for Cardiff City, while first-choice goalkeeper Hannes Halldorsson missed the last game of the qualifying group after dislocating a shoulder in training and has only recently begun playing again, on loan at Bodo/Glimt in Norway from NEC in Holland.

Other important players are the central defensive pair of Ragnar Sigurdsson and Kari Arnason, who were instrumental in Iceland only conceding six goals in their 10 qualifying group matches.

Iceland have not done well in friendlies this year, but they will recover their touch before the action starts in June. The return to the national team of Eidur Gudjohnsen last year was a major boost for the squad. At 37, the former Chelsea and Barcelona star still has a lot to offer, both on and off the field.

Formation wise, there has not really been a plan B in recent years. However, if the opposition play five in midfield, rather than put in an extra midfielder and change to 4-5-1 or even 3-5-2, Iceland will ensure that one or both attackers track back even more than usual, and that the full-backs and midfielders work together to stifle the opposition. 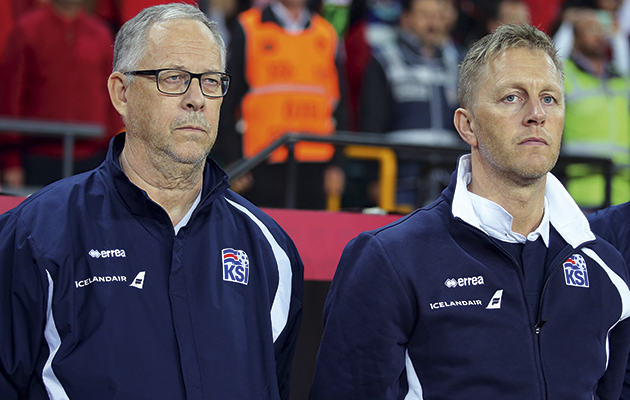 He resigned after failing to reach the 2010 World Cup. Disciplined, organised and extremely focused on every detail. His contract is up after France.

Heimir Hallgrimsson
Age 49 (10.06.67)
Hired as assistant coach when Lagerback was appointed in 2011, they struck up a very good partnership and he became joint-coach two years later.

A qualified dentist, he often meets up with supporters in a pub close to the stadium and discusses tactics. Has a contract until 2018 and is expected to succeed his mentor at some point.